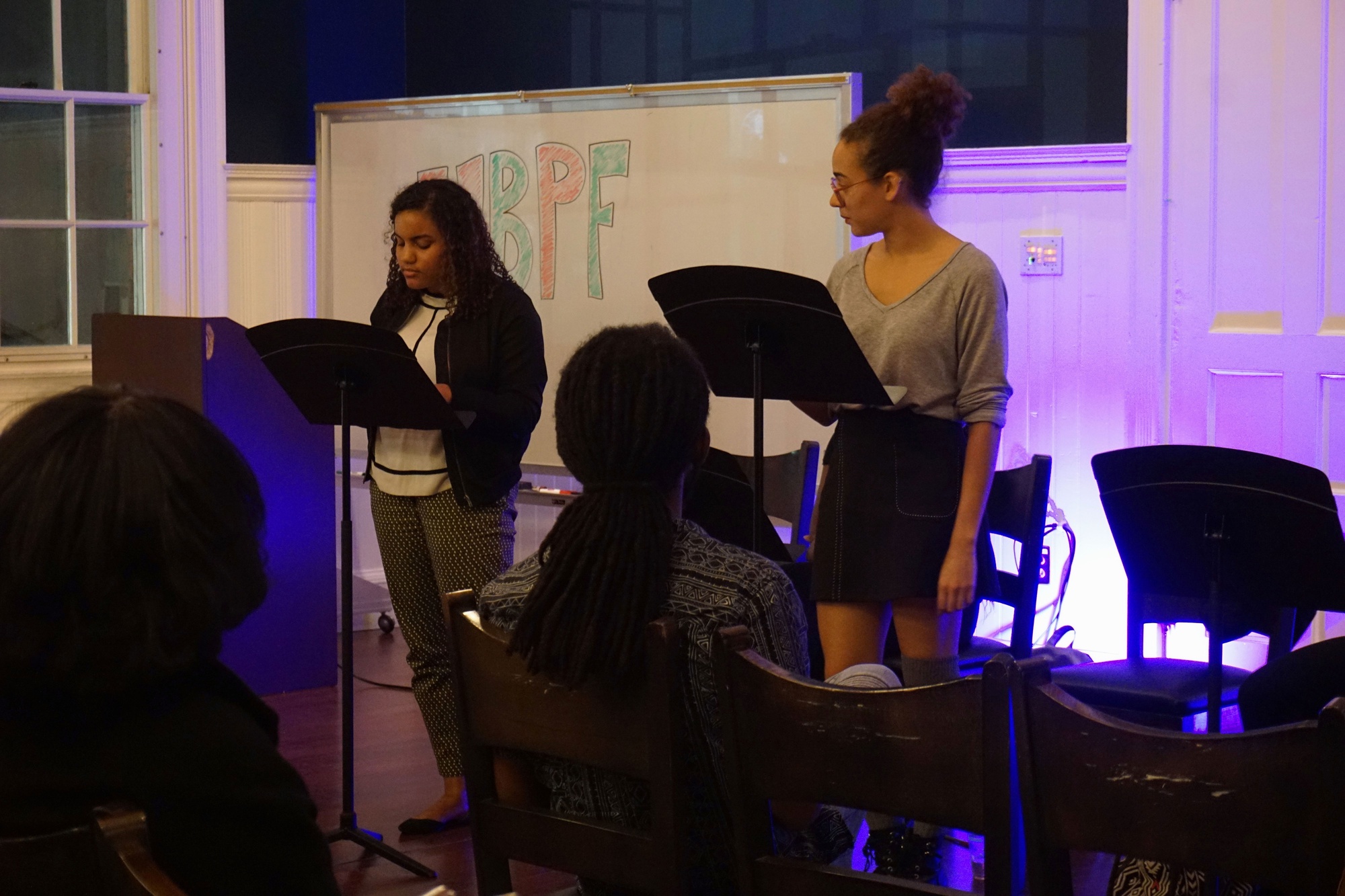 Verrone is performing as Black Narcissus, the title character of his original play. “Black Narcissus” opens the first ever Harvard Black Playwrights Festival, a presentation of original theatre including unstaged readings of three student plays and one student screenplay. The festival also includes a Q&A panel with playwrights Kirsten Greenidge and Robert O’Hara, and an outing to Adrienne L. Kennedy’s “The Owl Answers.”

The idea for the festival stemmed from conversations in an introductory playwriting class taught by Sam W. Marks. As they worked to write their own plays, organizers Ian A. Askew ’19 and Madison E. Johnson ’18 grew interested in showcasing original student work without the grandeur of a full-fledged production.

“I hadn’t seen many student readings that were just intended to be a workshop,” Askew says. “We wanted to open up a space where we could get a lot of ideas flowing, rather than having to put so much energy into one show, one creative work.”

According to Askew, the Theater, Dance, & Media department encourages students to focus on original projects, in addition to studying a theatrical canon. TDM, the English Department, and the Office for the Arts provided funding for festival expenses such as bringing Greenidge and O’Hara to the event.

Askew points to The Harvard Black Community and Student Theater Group (BlackC.A.S.T) as part of his inspiration for the event. He sees the festival as a platform to amplify the voices of an already vibrant campus community of black theater-makers.

Brophy’s play “Passing Marks” focuses on her multiracial identity and the tension between her self-image and the racialized narratives forced upon her. In a patchwork of historical and present-day scenes, Brophy constructs and reclaims her narrative.

In general, the subject matter of the plays is serious, exploring themes of black beauty, religion, sexuality, and the relationship between history and identity. As the actors speak, the personal becomes not only political, but also shared.

“It’s hard to put yourself out there, put your vulnerabilities and everything into a piece of work like that,” Jessica S. Edwards ’21, a performer, says. “I think these kids really have something to say and people should come out and support that.”

The festival’s setup reflects the often experimental process of playwriting itself. Actors sit in a line, reading from scripts..

“It’s a form that doesn’t necessarily seem inviting at first,” Askew says, “because people think there’s a lot of rules to it. But especially once you read playwrights like Robert O’Hara—there aren’t that many rules, and you can kind of do whatever you want.”

Gabby S. Preston ’20, who premiered their first play “Platforms” at the festival, found themself writing, arranging and rearranging over the summer. Primarily a fiction writer, Preston had to adjust their process.

“A lot of the time I’d be reading, if not actually out loud, just reading it back to myself in my head,” Preston says. “Trying to put different inflections on it, really paying attention to the way phrases fit together.... That was weird and different.”

Both festival participants and performers came from disparate theater backgrounds—Askew says many of them are seasoned HRDC veterans, while plenty are new to theater and “haven’t touched it at all.”

Preston admires the process-oriented nature of the event, which allows the audience to focus on the work that goes into playwriting as opposed to the final production.

“It’s a vulnerable move, really,” Preston says. “It’s just been a ‘do your best’ process at every turn. And that’s cool, because a lot of stuff [at Harvard] isn’t really ‘do your best.’”

Silky R&B permeates the air in Farkas Hall 203. It’s SZA’s “Doves in the Wind”—audience members mouth the familiar words. Students arrange chips, pizza and cookies on a table by the door. Askew stands at the front of the room, welcoming guests to the workshop. Actors prepare to tell their story.

“With a staged production you can communicate a lot more specifically,” Askew says. “But with a reading, you can let the script breathe.” The bare-bones nature of the performance allowed for audience members to do some creative grunt work.

“It makes it more personal, I think,” Iva Markicevic, a spectator and student at the Graduate School of Education, says. “Like with a movie and a book—with a movie someone else is shaping the story for you, but with a book you get to internalize it. I think this reading gives you that same option.”

The notion of control over one’s personal narrative is a common thread in these plays. Students’ artistic freedom to own their stories may be to the credit of the festival’s DIY spirit. Askew says he anticipates another festival next year and more student-led arts events on campus.

“What’s really defined my arts experience at Harvard so far has been people trying to open up student-led or non-institutional spaces,” Askew says. “And it’s cool to see the arts administration supporting that. Hopefully more folks will continue to make their own spaces for whatever they don’t already see.”