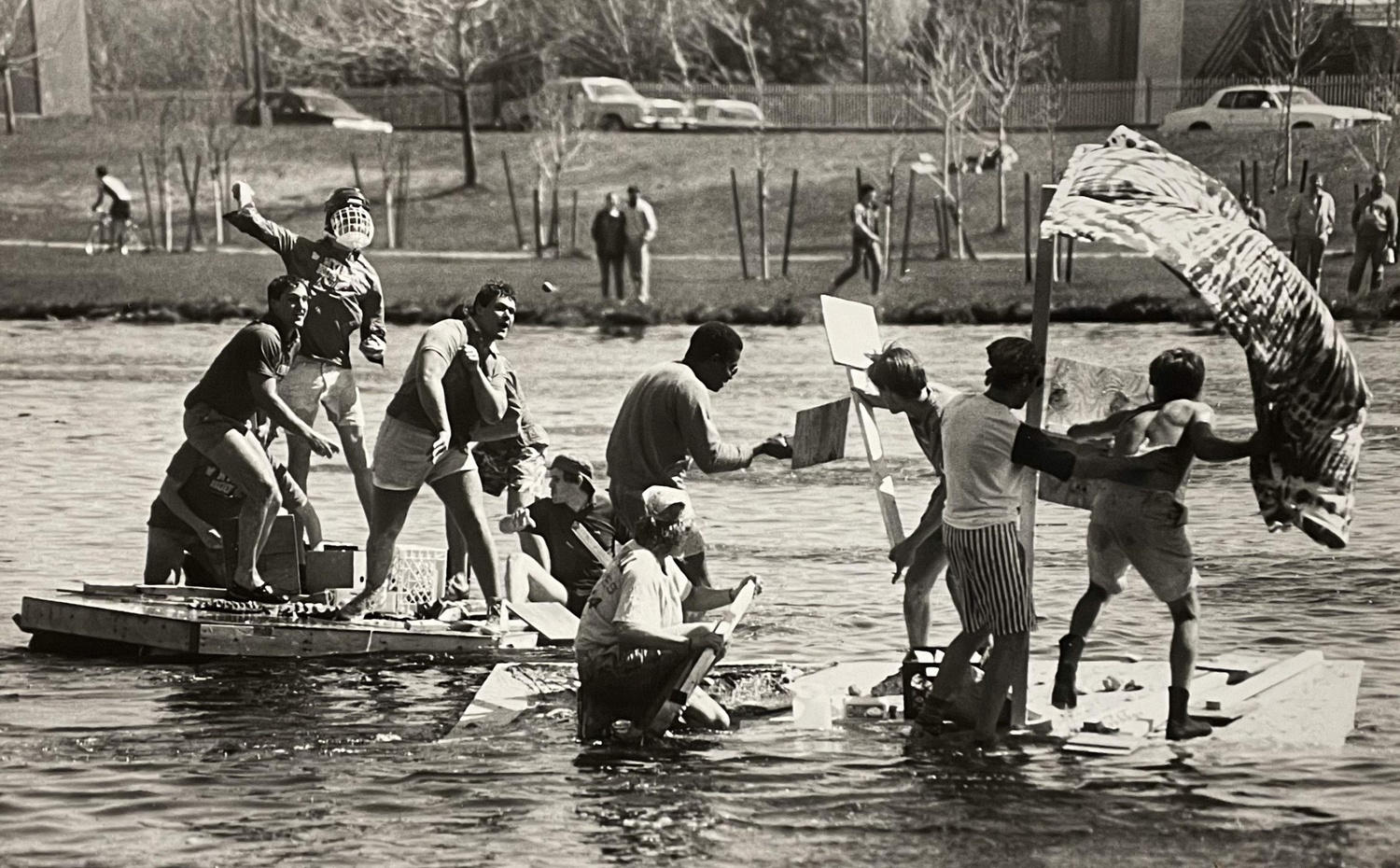 To construct their rafts, racers collected materials from across campus. Some made intricate designs, while others threw together a hodgepodge of items.
By Jeffrey Q. Yang

In 1989, rafts made of wooden planks and milk cartons stormed the Charles River for the last time. Eggs, tomatoes, and other food littered the water — the remnants of combat. These raft races, sponsored by Adams House and co-founded by William F. Lee ’72 — the former Senior Fellow of the Harvard Corporation — featured a “funky flotilla” each spring until 1990, when then-Dean of Students Archie C. Epps III ended the event “for reasons of liability.”

“I have no idea what happened,” says Maria C. Mendez ’91, who raced the year prior. “But it could have easily been any one of us that got hurt — or, any student could get hurt — because the rafts tended to not last for very long, and they just came apart in the water.”

Any student — undergraduate or graduate — and even alumni could sign up to race and self-proclaim their affiliation, often to represent their house, but sometimes to represent their campus organization. To construct their rafts, racers collected materials from across campus. Some made intricate designs, while others threw together a hodgepodge of items.

“We were just making a raft from just probably gigs and gags and whatever we could find,” Mendez says. “I don’t think there was any scientific computation before we started building the raft. We were using pretty much anything that we had leftover from anything.”

For his first race in 1977, David F. Wilson ’75 joined his pinball teammates to build a raft with a pinball machine; they managed to buy an affordable one and hauled it to the river on race day. However, they discovered that the box was too top-heavy, and they had to make last-minute changes in order for the raft to float. For his second race the following year, Wilson entered with Frank M. Kulash ’76, representing Currier House, and they created their raft from milk jugs.

“That raft, we named ‘The Mystery Floating Chairs,’ built with the flotation of five-gallon milk jugs from the cafeteria,” Wilson says. “We collected enough of those and did the math — I think it’s like seven pounds of flotation per gallon — on how many of these things we would need. To fulfill the vision, we put them out on pontoons way away from the central area of the raft. The central area of the raft was simply two chairs.”

Others just hoped to float long enough to wreak havoc, as Daniel W. Gil ’79 reported in a Crimson article from 1976: “Kirkland House, whose three kamikaze crafts — loaded with smoke bombs, four cases of dry ice and rotten fruit — never made it to the starting line. Their plans to capture the ‘senseless violence’ award went down in smoke and bubbles from the dry ice crates.”

Over the race’s 20-year duration, the awards changed, but the goofy spirit remained — from “first to sink tastefully,” originally named the Huckleberry Finn Award, to the “most-polluted crew member,” awarded in 1976 to a Mower resident. “His raft, the ‘Detente,’ had sunk after 20 feet and he had spent the rest of the race consuming an entire bottle of Scotch,” Gil reported.

That same year, a team donning red “Ve Ri Crass” shirts won the “Ronald Reagan” award for leaning furthest to the right: the crew of “15 drunk students and one not-so-reluctant proctor” managed to cling onto their raft after falling into the river multiple times and “battling a dog who had made off with an oar.” 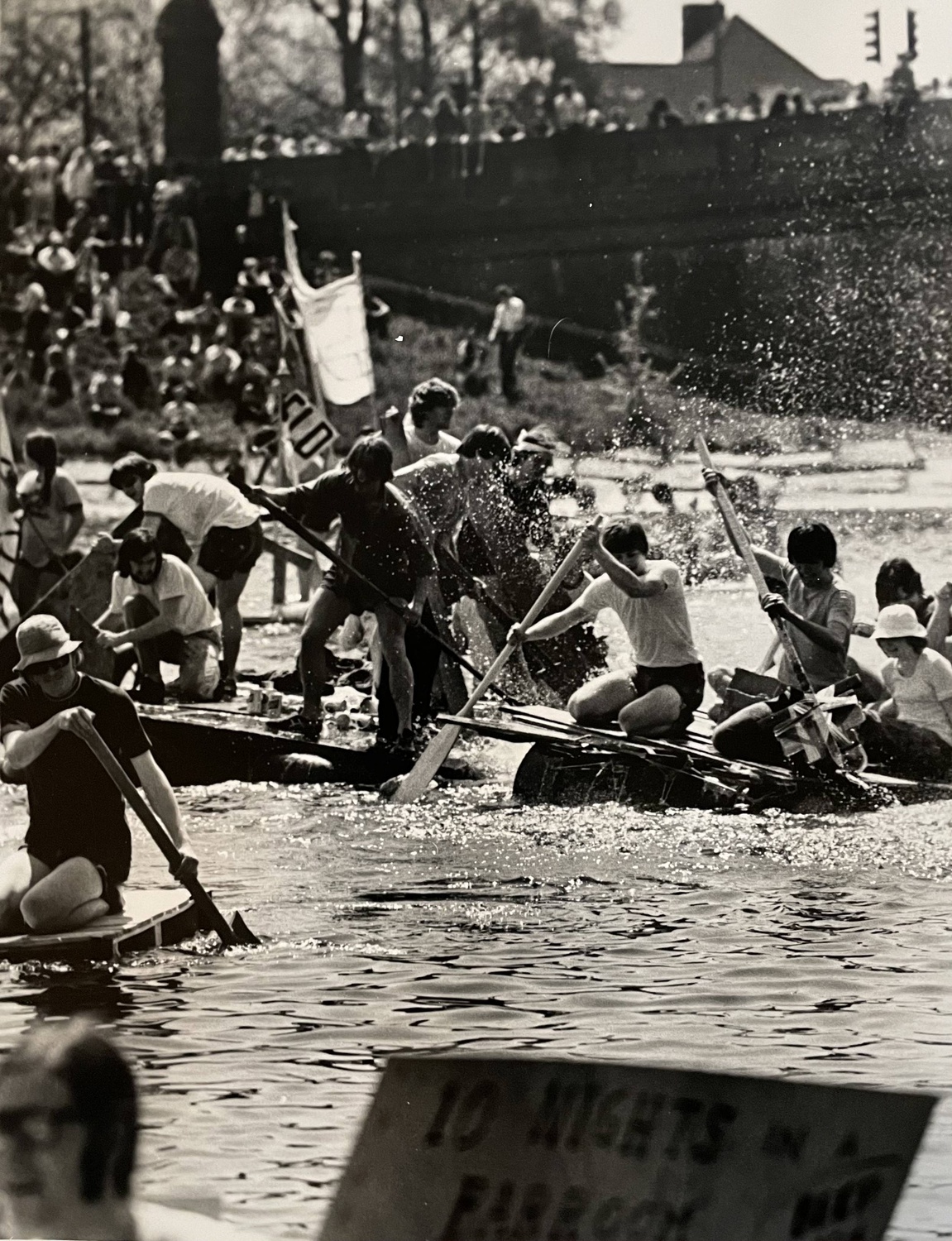 During the inaugural race in 1971, the “most unsportsmanlike boat” award celebrated creative malpractice. Lee, the co-founder of the race, remembers that a group from Harvard Business School won the award.

“The raft had a long, long, long, long rope, and they stationed a group of very strong Business School students down near the bridge at the finish line, who basically pulled the boat the entire distance,” he says.

As the years went on, roughhousing became a tradition. Lee recalls no instances of spectators or participants throwing objects at the original 1971 race, adding that “the idea that the head of Adams House was sitting on the bridge to judge who is coming over first, I think, caused people to be on better behavior.”

Six years later, Kulash remembers that the race was still “very light-hearted” but involved “a lot of trying to sink other people’s rafts, throwing things like eggs and water balloons at other competitors.”

Larger houses often organized larger boats that had the capacity for “warfare concepts.” “Mayhem and sabotage were actually an important feature of the event,” Wilson says.

In their early years, the races attracted a decent crowd. Lee remembers having at least 12 rafts in the first year — others may have raced but never finished — and a sizable group of spectators that he thinks “enjoyed themselves,”, especially in the beautiful weather.

The year that Wilson raced with Kulash, Wilson recalls the event remained just as popular as the original race, with at least a dozen rafts and “quite a few people watching. "I think partly that warfare made it more interesting,” he says.

However, in its final years, the races generated less excitement. By 1989, Mendez does not remember having many spectators — generally, just the friends of the participants.

Still, the event’s purpose remained the same. In 1971, coming off the heels of political unrest and student activism on campus, the students experienced “many, many issues beyond the norm,” Lee says. He envisioned the raft race simply as “something that was just fun for the community.”

Even as the event’s popularity dwindled almost two decades later, Mendez remembers the races as a bonding experience. “Yes, it was for fun, but it was just one more thing to have pride in your house and come together from different groups within the house,” she says.