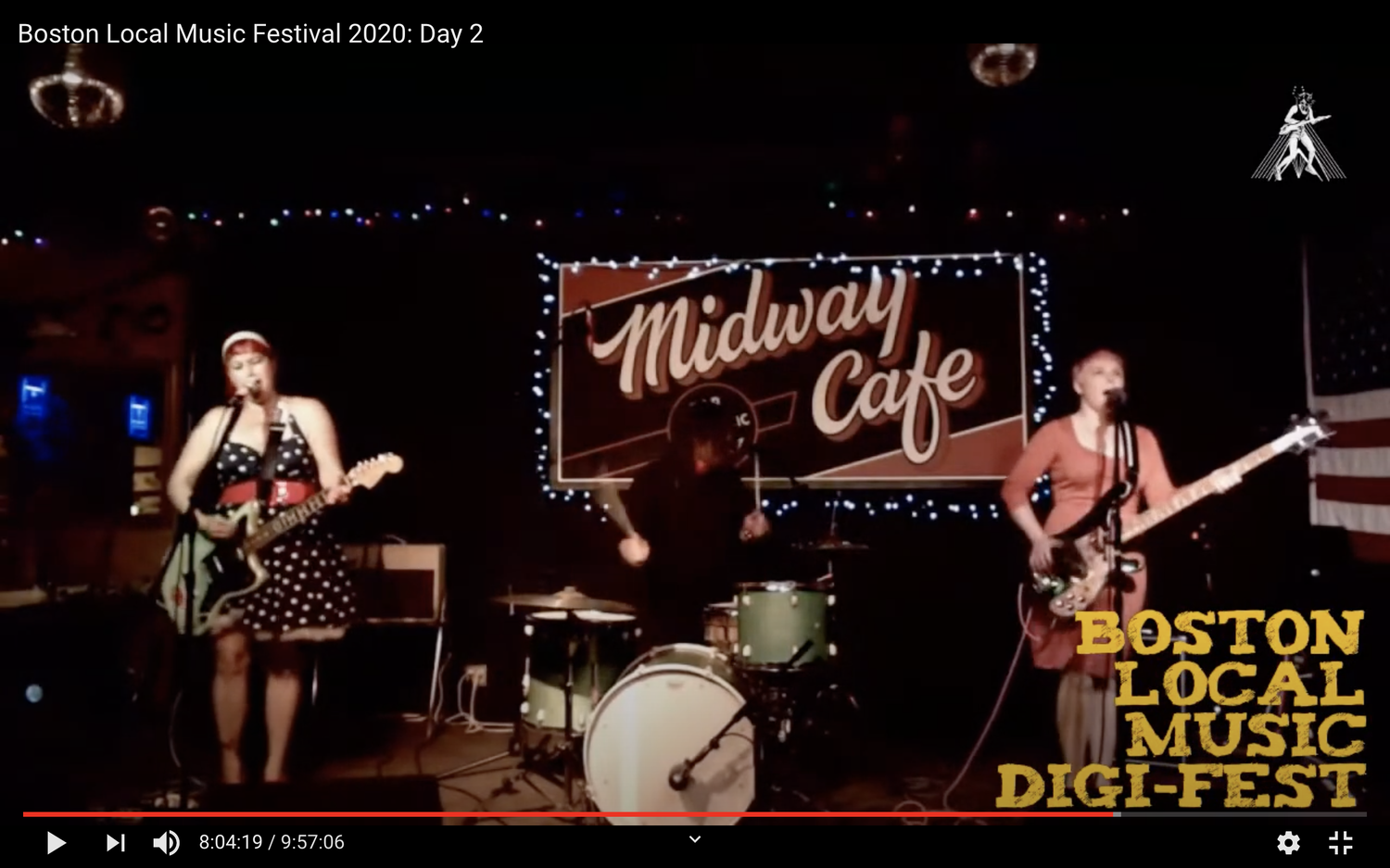 With a flourish of the cymbals, The Knock Ups, Shae’s feminist punk rock band, begin their set at the Boston Local Music Festival. By Courtesy of Maliya Ellis
Advertisement
Advertisement

Keeping Local Music Alive, One Livestream at a Time

This year’s Boston Local Music Festival comes at a time when local musicians are threatened and  increasingly important. “Sharing art is a way to connect with each other, now more than ever, especially considering our stages are dark and will likely be for a long time,” Sickert’s band says.
By Maliya V. Ellis

Gretchen Shae flips her red ponytail, steps up to the mic, and starts playing her electric guitar as though her life depends on it. With a flourish of the cymbals, The Knock Ups, Shae’s feminist punk rock band, begin their set at the Boston Local Music Festival.

The sound quality is good, the visuals decent. With a little imagination, I can almost pretend I have a front-row seat. And then I lift my eyes from my computer screen and remember where I am: a coffee shop in Connecticut.

Like most large public events, this fall’s Boston Local Music Festival, only in its second year, had to be reimagined for a virtual format due to COVID-19.

The festival aims to introduce potential fans to up-and-coming groups in the Boston area. Last year’s inaugural event was held on City Hall Plaza, one of Boston’s largest public event spaces, and featured three stages and a beer garden. “Everybody loved it. The people that came really were blown away,” remembers Jen Matson, one of the event organizers.

This year’s festival showcased a new kind of live music: Facebook and YouTube Live. The 30 participating local bands played from several local music clubs and venues, but to a virtual audience. Applause came in the form of likes, cheers in the form of comments.

But despite the festival’s new format, its intent has remained the same: to connect local talent with new fans — a goal that has proven perennially challenging.

Heather R. Timmons is the founder of Tiny Oak Booking, a small company that books bands at local venues and festivals, including the Boston Local Music Festival. In her experience, local bands have always faced barriers breaking into the Boston music scene, even pre-pandemic.

“The hard thing is, there’s a big gap between the smaller bands and the bigger publications and venues,” Timmons says. “There’s not a nice connection between all the resources in the city to help build bands up one step at a time.”

The challenges local musicians face have only been amplified by COVID-19. With music venues facing lockdown orders, live performances have become nearly impossible.

“We would have shows three weekends out of the month. Sometimes every weekend. But sadly, it doesn’t look like that anymore,” Shae says. The Knock Ups finally played an outdoor show in Worcester last Friday — their first since February 29.

Aside from cancelled shows, many bands have been unable to rehearse together. Shae had to resort to a back-up drummer for Sunday’s performance, because the usual band member “is not comfortable leaving her house.”

In the absence of regular gigs, musicians have had to rely on live-streams or other creative solutions to keep up their craft.

Walter Sickert, lead singer of band The Army of Broken Toys, began “Bunker Buds,” a music and talk show named for the often bunker-like feeling of quarantine. They see their show, live-streamed every day on Facebook, as “weird and wonderful” and a “tiny spot of good in a world of chaos,” they wrote in an email to FM. The show regularly attracts 1,000 viewers, according to the band, and was recently nominated for a Boston Music Award.

Sickert performs a special episode of Bunker Buds at the Boston Local Music Festival, and I tune in to watch. The scene, aglow with red light, is certainly weird and wonderful — among the miscellany in the background I spot a plush monkey, a porcelain doll, a skeleton, and an animatronic cat with green eyes. Sickert sits in the center, holding a guitar and wearing sunglasses with LED hearts over the lenses. 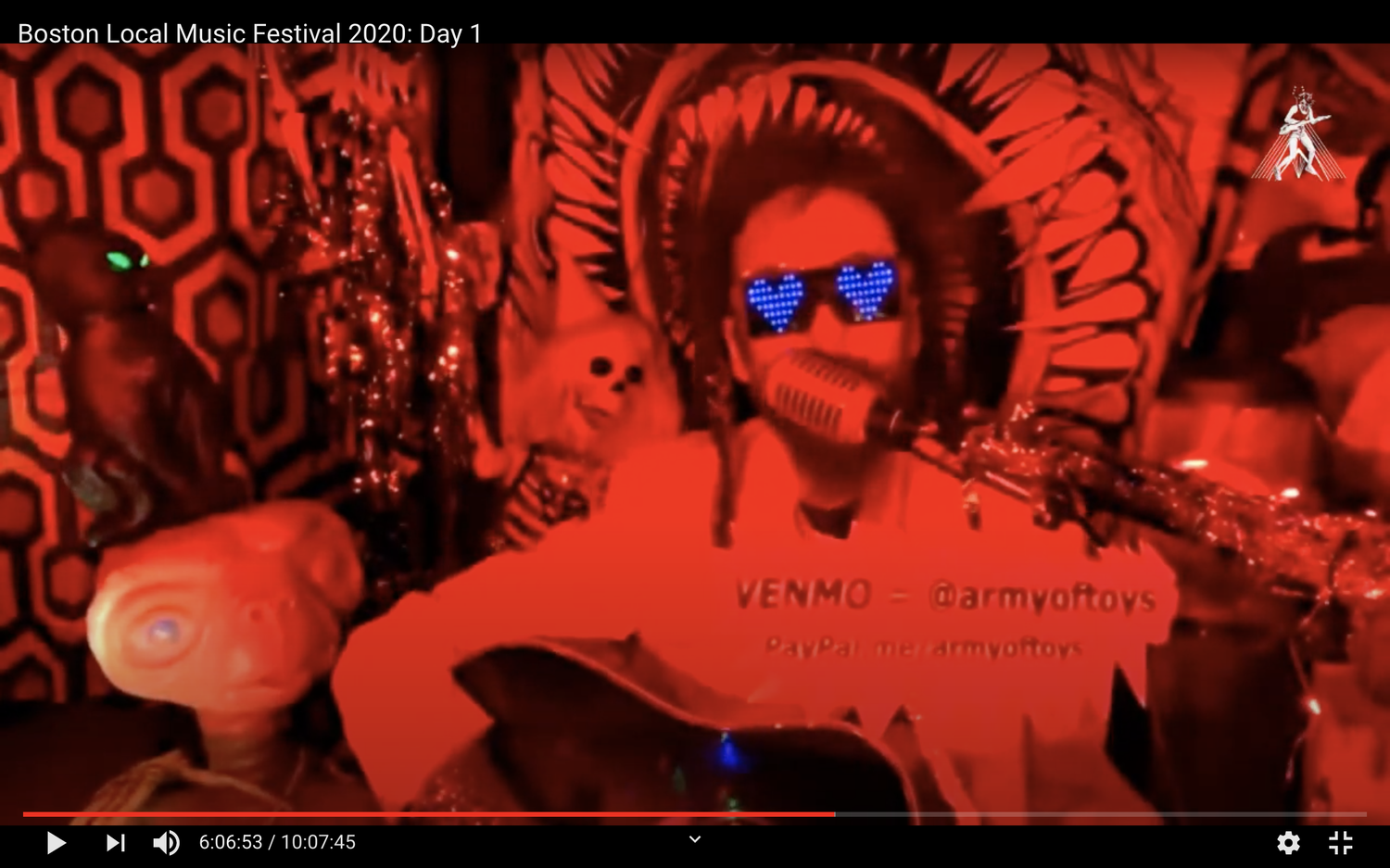 Sickert performs a special episode of Bunker Buds at the Boston Local Music Festival, and I tune in to watch. By Courtesy of Maliya Ellis

The claustrophobic backdrop and Sickert’s position, staring directly into the camera, convey a surprising intimacy, perhaps impossible at a live show. They strum and sing with a raspy, soulful voice, and, in between songs, pull out a rainbow-lighted megaphone for an “affirmations” segment. “You can change the world,” they boom in a Wizard-of-Oz voice. “You can!”

Shae and The Knock Ups have also tried to perform with a compelling intensity, despite the virtual format. “We don’t just stand and play and be locked to the microphone,” she says. “I pretend that unless I’m singing, the mic is on fire and I need to get away.”

As I watch, Shae strides to center stage, takes a breath, then doubles over dramatically and plays the final chord, letting it linger as if waiting for applause to die down.

This year’s Boston Local Music Festival comes at a time when local musicians are threatened and increasingly important. “Sharing art is a way to connect with each other, now more than ever, especially considering our stages are dark and will likely be for a long time,” Sickert’s band says.

In a new reality where distance is integral to safety, the music festival, though virtual, strives to infuse human connection. “It’s about community, and creating spaces where people can share things they’ve created in a safe environment,” Timmons says. “Music as a whole brings people together, no matter what format, or where.”