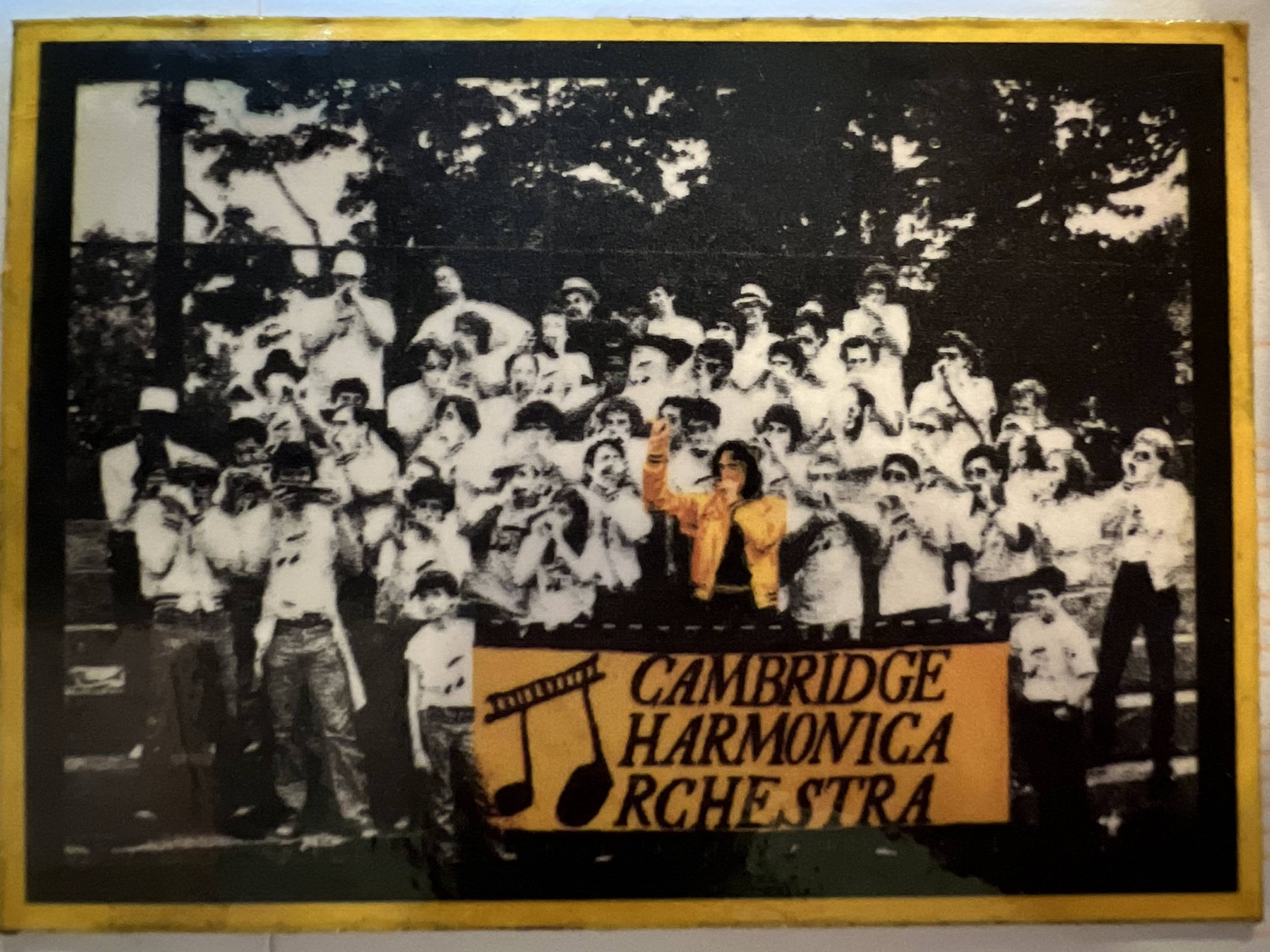 The Cambridge Harmonica Orchestra, a short-lived but memorable ensemble of local musicians which ran from 1981 to 1986. By Courtesy of Otis Read
Advertisement
Advertisement

The Cambridge Harmonica Orchestra, a historic gem of the Cambridge music scene, had its glorious debut more than 40 years ago. Well known for their vibrant yellow jackets and laid-back attitudes, this group of musicians hopped between bars and music fests, bringing the blues harp to Cambridge and beyond.
By Mila G. Barry

The year is 1981. It’s mid-June. Burgeoning summer beckons Cambridge residents from their hibernation against the spiteful New England winter. The Cambridge River Festival, an annual weeklong celebration of art and music, is in full swing, and today it culminates in a parade. Painted floats pack the streets, kids traipse down Memorial Drive, and people of all ages line the sidewalks to watch the festivities. This year, a new group brings up the rear of the parade: the Cambridge Harmonica Orchestra.

The orchestra, a historic gem of the Cambridge music scene, had its glorious debut more than 40 years ago. Well known for their vibrant yellow jackets and laid-back attitudes, this group of musicians hopped between bars and music fests, bringing the blues harp to Cambridge and beyond.

The group reached peak popularity in the mid ’80s, with a crowning performance at a club in Boston called The Tam. Forty-seven members packed the bar for a night described by the Boston Globe as “harmonica heaven.” NBC broadcasted the event.

Unfortunately, enthusiasm waned in the years to follow, and the CHO disbanded in 1986 due to the logistical challenge of booking gigs and keeping members involved.

So how did this short-lived band of roving players come about? And what is a harmonica orchestra in the first place?

The CHO was conceived in 1981 as a response to the city government’s call for new additions to the River Fest. Founder Otis Read wrote up a proposal, received a $200 grant, and had to recruit enough harpists, or harmonica players, to make it happen. “I had no idea that I would be able to pull it off,” Read says.

Drawing on his background as a working musician, he reached out to the other harmonica players he knew. The eccentric group of hippies and rock-and-rollers, pros and amateurs alike from around Massachusetts and Washington, D.C., reached about 350 members at its height. The group included musicians like James Montgomery, whose band opened for Bruce Springsteen and the Allman Brothers.

“I don’t think there was anybody that would have said no,” Montgomery says. “We [were] going to get together with 30 wacko people and have some fun.”

The Orchestra had periodic gigs with a portion of its extensive membership attending each performance. Practice sessions, mostly casual, were held in a garage space in Brookline.

“We’d have a monthly gathering of people — all sorts of people smoking weed and playing,” Read says. “It was just chaos, and it was wonderful.”

Though Read came up with the idea for the CHO, music director Pierre Beauregard was equally crucial to its function. He chose their repertoire, mostly blues and some New Orleans-style Mardi Gras tunes, and he arranged the pieces specifically for the Orchestra. CHO harpists split up lead, rhythm, and counter-lead parts and were often accompanied by bass harmonica, drums, accordion, and washtub bass.

Read says Beauregard’s musical leadership brought character to the CHO. One of his favorite moments from the group’s performances was when Beauregard would announce a breakdown during a solo, spurring a full-on polyphony.

“We’d be playing a song, and there would be a chorus, and Pierre would say, ‘Everybody take a solo,’” Read says. “The whole band would just go crazy. The drums and the bass would be pounding along.”

Wish you could have heard the Orchestra for yourself? Luckily, this eclectic part of Cambridge’s past has been immortalized on Youtube. Hear a recording of a live performance here, or check out their Christmas cover of “Joy to the World.”

— Magazine writer Mila G. Barry can be reached at mila.barry@thecrimson.com.