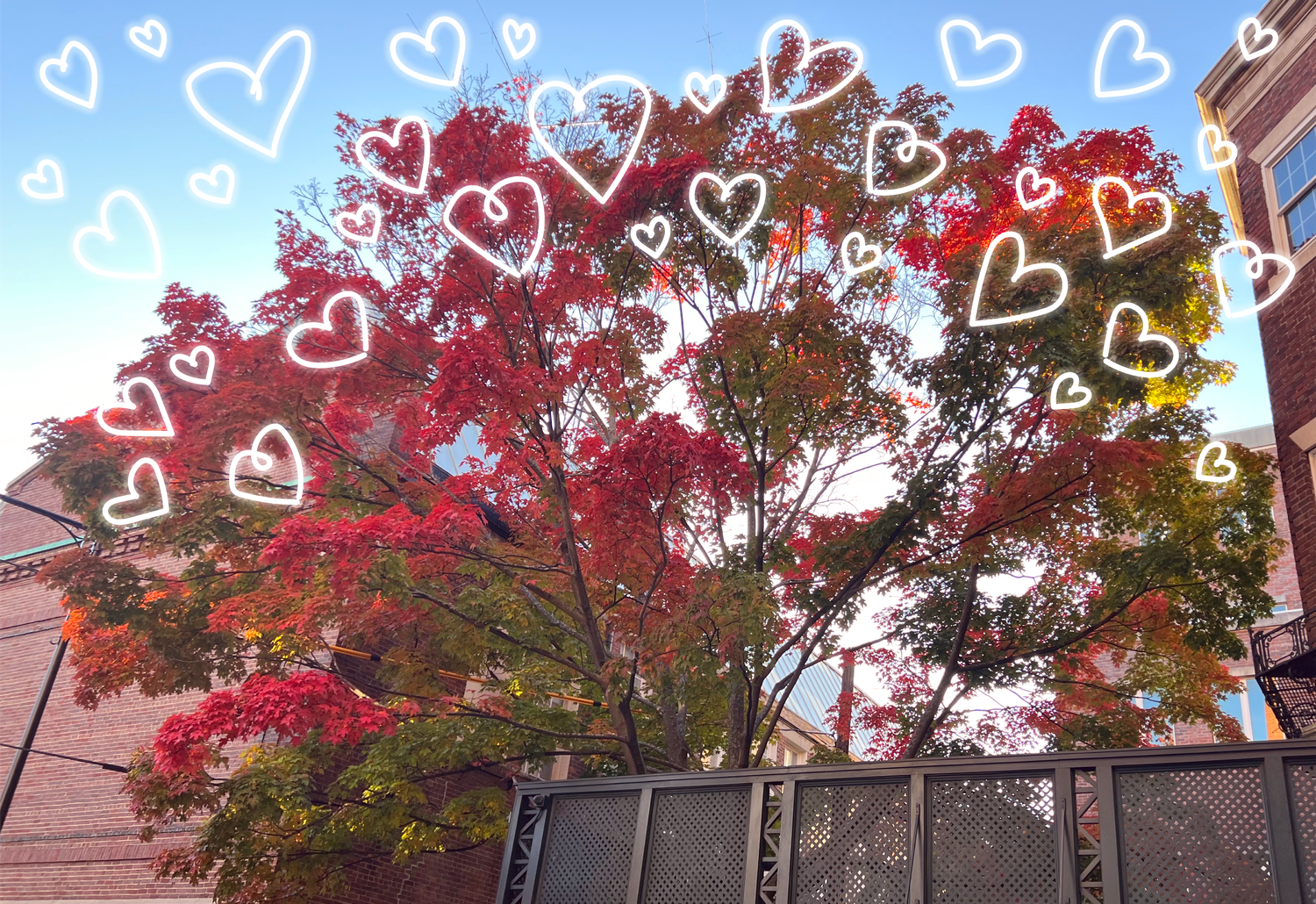 You blushed — your leaves were turning red as the weather got colder. You dropped a leaf down to me and I held it like a hand. We agreed that what we had was real — no situationship, no post-party hookup. We agreed not to see other people.
By Chase D. Melton

It all began with a punch. One windy autumn night, a mysterious card with a stamped bull insignia was slipped under my door. I read the note. Wednesday, 7 p.m., 1 Plympton St. Cocktail attire.

I showed up at the A.D. on time. I knocked, and a man who looked like the type to peel the crust off a peanut butter and jelly sandwich opened the door and asked me for my last name. He seemed impressed when I answered: WASPington.

“I knew your brother,” he said.

The hour passed by in a haze of Harvard introductions and clinking beer bottles. I met four guys named Sailor and befriended a taxidermied deer head. When the conversation died down, the president brought us out to the courtyard.

That’s when I saw you.

I’d seen all the tweets, but nothing compared to the real thing: There you were, leaning against the brick wall, a sly devil; tall, dark, and handsome. We locked eyes and it was like drinking from a cold spring. I looked away and it was like dying of thirst.

Two weeks later, I’d made it to round two. This one was less formal — a low-key, boozy kickback in the courtyard. I wore my finest salmon-colored quarter-zip. When I entered, chairs were arranged in a circle around a fire pit. Beers were distributed; eager punches sucked up.

That night we had our first conversation. I took the chair closest to you; at one point I leaned back against your trunk. You blushed in response; your leaves were turning red as the weather got colder. You dropped a leaf down to me and I held it like a hand. We agreed that what we had was real — no situationship, no post-party hookup. We agreed not to see other people.

During the two weeks between rounds, I couldn’t wait to be on the other side of that brick wall. One day I thought about scaling it, but the barbed wire on top deterred me since I was wearing Burberry slacks and I was running late to de Blasio’s speech at the IOP.

It’s hard to tell your friends that you’re in love with the tree in the A.D. courtyard. The follow-up questions are where it gets most awkward — people want to know who pays for dinner, how we “do it,” who’s on top. I tell them that’s our business, but they have a point. Every night we spend together, I feel like we’re creating something entirely new.

As Héloïse of Celine Sciamma’s “Portrait of a Lady on Fire” once wisely wondered, “Do all lovers feel they’re inventing something?”

Bad news, though. Last night, no third-round invitation came. I think I’ve been cut. I should be more worried — my dad said that if this happened he’d do to me what he did to my childhood dog Sparky (donate me to the Cornell Agricultural School). But I don’t care. All I can think about is you.

I have an idea.

Next Wednesday night. 10 p.m. 1 Plympton St. No attire. Just you. Me. The forklift that I am licensed to drive because Dad doesn’t trust non-WASPingtons to move his Egyptian sculptures between tax-free airport holding zones. I’m busting you out of there.