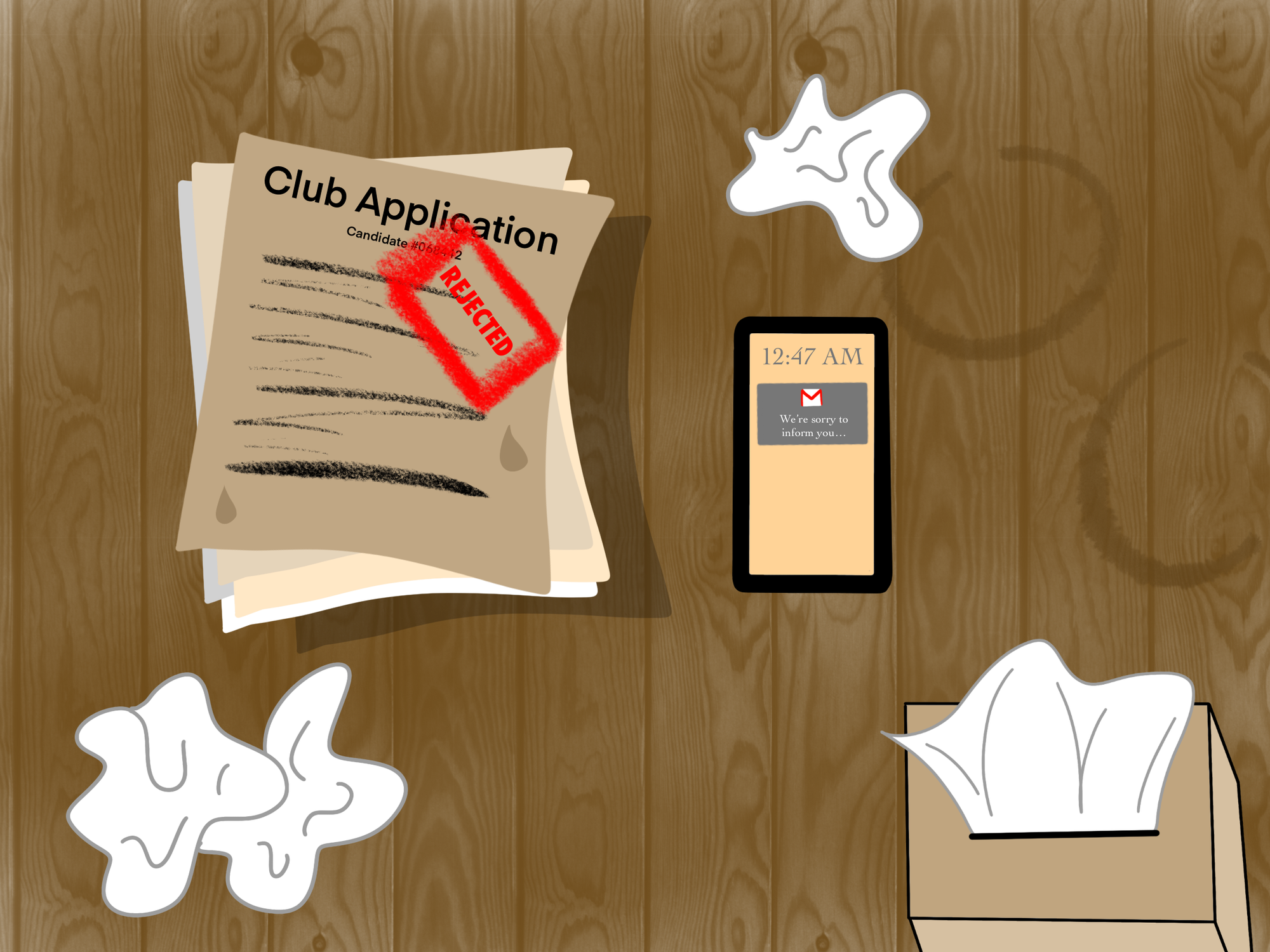 Is it vulnerable or honest about the reality of being at this school? Or is it playing to an aesthetic standard of what a Harvard student is supposed to be: personality, friendships, and academic success, all in one? These performances feed into a perception, however misguided, of students at Harvard and other elite universities as universally capable and flawless super-students, without even the possibility of failure.
By Elias J. Schisgall

For much of my life, I wanted to be a professional actor.

I had been acting as long as I can remember: school plays, acting classes, the whole nine yards. It was a central, if not the central, aspect of my life, and pursuing it professionally just felt natural. But after one pandemic, some substantial self-reflection, and a fortuitous rejection from the University of Michigan’s School of Music, Theatre, & Dance, my plans had changed. Driving this shift — beyond not wanting to consign myself to a life of auditions ad infinitum — was the realization that I couldn’t handle it at that caliber. That I just wasn’t good enough.

One might think coming to terms with my deficiency would have been a serious blow to my self-esteem. But in truth, I found it liberating. I had unburdened myself from a self-inflicted and fierce pressure to excel. Finally armed with an honest and rational evaluation of my middling skills, I was actually excited to continue acting in some amateur capacity.

In other words, I looked forward to having a hobby.

Hobbies fill leisure time with the rewarding experience of making art, engaging in a craft, or being active. But the value — or properly put, the joy — of hobbies lies not in their end result, be it a painting, a wooden spoon, or a seven-minute mile. Rather, it exists in the activity itself. In the New York Times, Tim Wu described this joy as the “gentle pursuit of a modest competence, the doing of something just because you enjoy it, not because you are good at it.” Free from the pressures of excellence, we can take pleasure in the wide range of available human activity in a low-stakes, experimental way.

In my mind, college felt like the perfect setting to sample it all. Like every new freshman last fall, I marched eagerly into the student activities fair, signing up for email lists, collecting club merch, and marveling at the expansive range of options. It felt like nothing was off-limits. Naturally, I got myself on a theater email list, and ended up going to a couple auditions.

But callbacks rolled around, and nothing had come of my efforts. In retrospect, it was probably a good thing that my acting career that semester had ended. Certainly, experiencing this denial within weeks of coming to college stung. It registered that I’d had my first acute feeling of failure at college. But I was also unprepared for what might have come had I actually started acting at Harvard: demanding schedules, intense commitment, dedicated competition. Of course, Harvard students are highly skilled, and self-select into student organizations in the disciplines they’re best at. They often have professional experience in their craft, be it acting or otherwise, and produce rigorous, high-quality work. Against this background, it felt as though I’d have to hold myself to a pre-professional, if not professional, standard of work — a far cry from the experience I was looking for.

I ended up joining — and then backing out — of several clubs that semester. Many of Harvard’s student organizations, it became clear, required several hours out of a week or an already high level of skill or experience. I started missing meetings or forgetting about applications. Deadlines came and went. From the other end, I felt a pressure to commit more and more to the handful of groups I wanted to take seriously, crowding out the possibility of activities with genuinely low commitments. As the year progressed, I felt the scope of my engagement narrowing toward activities I felt confident I could succeed in, excluding opportunities to try new things. Underneath the stress and fatigue from an overfilled schedule was an intense fear that I would fail, that I wouldn’t learn quickly enough or couldn’t produce work of a given caliber. So I bailed, and that felt like failing too.

If the pursuit of excellence can deter us from embracing failure on a semesterly basis, the demand for productivity all but prohibits us from doing so on any given day or week. Any given hour should be spent getting ahead (or catching up) on work, networking, thinking about one’s professional future — something of value. Especially at Harvard, this way of thinking is often necessary, if nothing else, to meet the demands of intense coursework. I’ve found myself, at the end of many long days, rounding up all the hours where I could confidently call myself “productive.” The resulting figure looms in my mind as a measure of worth. It’s important, it seems, to take the skills we’ve got and put them to use: reading, studying, or just doing something that we can point to and say, I completed this. This was the value of my day.

And it’s not just hobbies. In the age of social media, we face pressure to be — and look — successful even in our personal lives.

Think of one of those glossy, day-in-the-life-of-a-Harvard-student TikToks: wake up at 6:15, run a half-marathon, finish an essay, redecorate your room — all before breakfast. Is it vulnerable or honest about the reality of being at this school? Or is it playing to an aesthetic standard of what a Harvard student is supposed to be: personality, friendships, and academic success, all in one? These performances feed into a perception, however misguided, of students at Harvard and other elite universities as universally capable and flawless super-students, without even the possibility of failure.

Maybe this type of social media behavior is targeted to an outside audience, looking to grow a network or for a rare moment of virality. Or maybe, it’s playing to an even more corporate force: the possibility of brand deals, sponsorships, and influencing. Of course, it’s only natural; companies are always looking for the possibility to connect to the Harvard brand, and students — not unreasonably — are always looking to make some money. But commercializing our social media presence blurs the line between leisure and business, further linking personal life and success.

And we are at the end of this equation: friends and fellow students, told to buy this or download that, all staked on the social identity of the seller. Of course this involves marketing oneself. Excellence and success sell; failure and vulnerability do not. The most effective social media persona is the kind of life the rest of us want to emulate. It says, be me.

What would it mean to be publicly vulnerable, to be open about failure? Harvard College Dean Rakesh Khurana provided one potential model for this last month in an Instagram post outlining his experiences of academic and professional failure: rejections from jobs, schools, academic journals. “There is something cathartic about putting your failures in front of you,” he wrote. Giving a name to these experiences of failure, Khurana correctly observes, it becomes possible to accept them.

I’m trying to be better at failing. I want to do things that bring me joy, even though I know I’m mediocre at them: acting, doodling, Mandarin, chess. Setting goals each day, I try to be realistic about my own capacity for productivity. When I inevitably procrastinate and fail to meet them, I try to give myself grace. I’ve all but stopped posting on most social media, because I know I can’t disguise myself as the prototypical, polished Harvard student.

Even with this piece, I’m worried about failure. This is a radical departure from all the reported stories I’ve ever written at The Crimson, and I can’t help but worry about backing out from fear and failing to complete the Fifteen Minutes comp — or worse, failing to meet a standard, being compared to other, similar works that are not only passable but stellar. But like Khurana says, writing this piece has been cathartic. Surrounded by what seems like a sea of excellence, publishing my experiences of failure feels painful, but necessary. I’m practicing failing every day. And I feel more successful than ever.