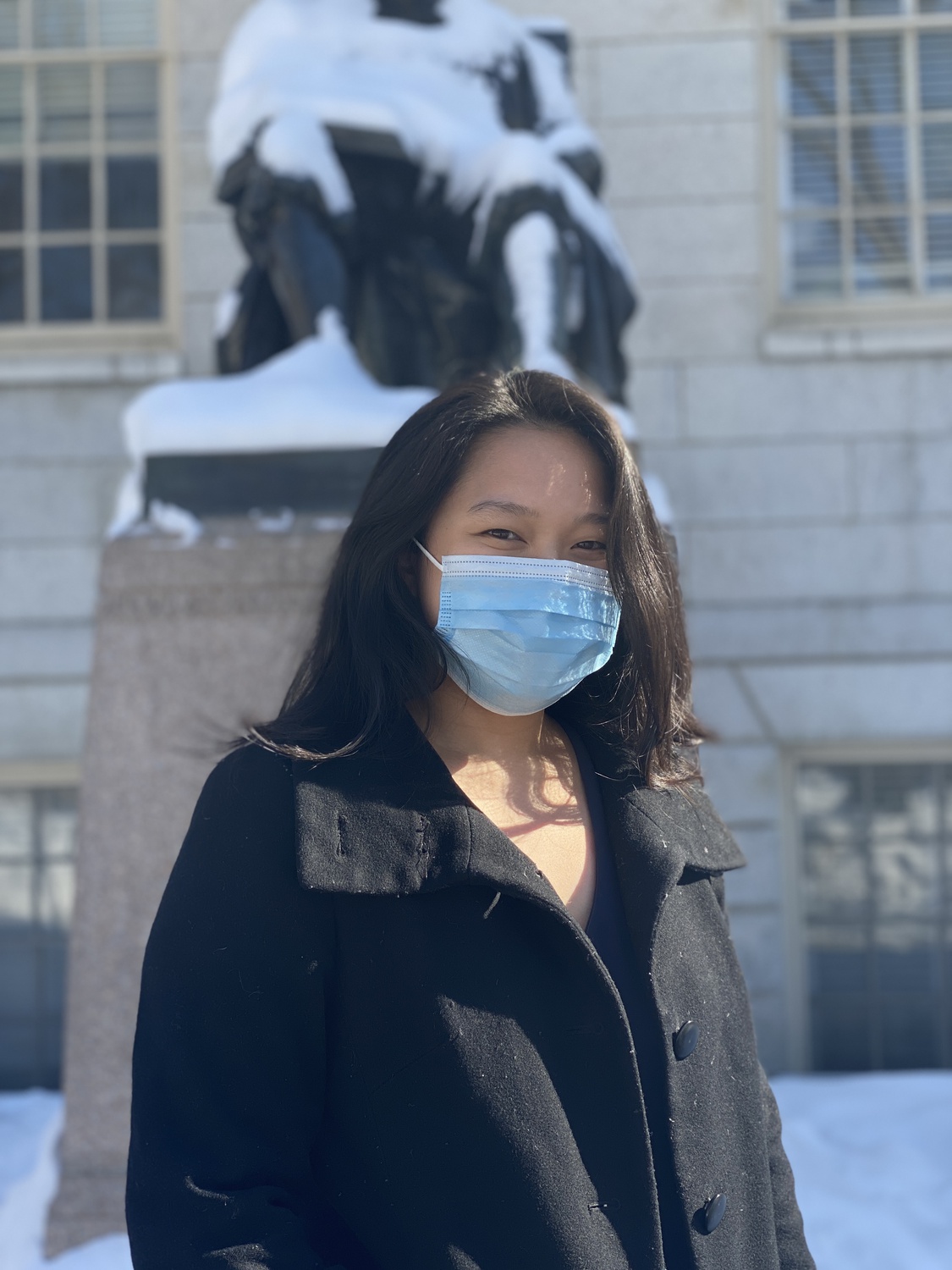 Allison P. Pao '21, an author of the petition appealing Harvard administration to reverse their decision to not offer Gen Ed 1076 next academic year. By Angela Dela Cruz
Advertisement
Advertisement

The Heart of Education

“Undoubtedly — I can't say this in stronger terms — this course would have met the highest level of Gen Ed committee evaluation,” he says. “There are other courses that were nowhere near this threshold of quality that you could cut for funding reasons. This is not the one to go.”
By Francesca J. Barr and Sophia S. Liang

"I used to liken it to fish,” says Katherine K. Merseth, a lecturer at the Harvard Graduate School of Education. “Harvard College students are incredible fish; they can swim upstream and downstream and at ease and over rocks. But they don't know there's water.”

Since 2011, Merseth has worked to make her students aware of the “water” — the education systems they have excelled in and often taken for granted. Her course, General Education 1076: “Equity and Excellence in K-12 American Schools,” was designed to expand Harvard students’ “very myopic view” of the historical, political, social, and economic roles that education plays, according to Merseth. Students review case studies, develop policy proposals, and visit a Boston-area school, often unlike the secondary schools they attended.

The course has exploded in popularity since its inception. Merseth has gone from teaching 50 students in a year to 160 students each semester and is still unable to keep up with the demand of 400 to 600 students who enter the course lottery annually.

But on Jan. 14, after nearly a decade of teaching Gen Ed 1076, Merseth received an email informing her that her course could not be offered in the next academic year due to budget constraints. When she asked for more information on how this decision was made, Laura E. Hess, director of the General Education program, responded assuring her that “this was not an intellectual decision about the merit of your course or teaching.” Merseth was told that the committee considered “meeting programmatic and curricular needs,” “recency of offering,” and whether or not a course head is a member of the Faculty of Arts and Sciences to decide what was cut.

“The FAS must pay the non-FAS schools for any courses offered by non-FAS faculty,” wrote Amanda J. Claybaugh, Dean of Undergraduate Education, in an emailed statement to The Crimson. “The FAS gives the Gen Ed program funds for this every year [. . .] Unfortunately, this year, those funds were cut by one third, forcing the Gen Ed program to make some very painful choices.”

Hess told The Crimson that Gen Ed 1076 is one of six Gen Ed courses taught by faculty from Harvard’s professional schools that have had their financial support deferred to next year. College spokesperson Rachael Dane stated to The Crimson for an earlier article that all non-FAS Gen Eds will be offered every other year going forward. Hess and Dane declined to provide further comment for this article.

Merseth was devastated to learn of this restriction, and her feelings were echoed by her former students. Nina B. Elkadi ’22, a Crimson staff writer, was first a student in the course, then one of its course assistants, then head pedagogical fellow. Elkadi says she felt the news in her gut. “It’s just really upsetting,” she says, “that what has been such an impactful and important way for students to find their potential career path, or even just something that they hope to keep in their heart moving forward, is no longer going to be offered.”

The day after hearing news of the cancellation, Elkadi joined Allison P. Pao ’21, a former Crimson staff writer, and Meaghan E. Townsend ’21 – both former students and pedagogical fellows for the course – in writing a petition to eight members of Harvard’s administration to reverse their decision.

“We believe that there can be no excuse for delaying this course to the 2022-23 academic year,” they wrote. “It sends the message that education as a field of study can be deferred during a moment when it has never been more pressing.”

Nearly 1,000 students, faculty, and alumni have signed the petition, but the authors say they are still navigating slow and inconsistent responses from administrators. Their scheduled meeting with Claybaugh and College Dean Rakesh Khurana has been postponed to Feb. 11. After the Gen Ed committee refused to meet with the petition organizers, Professor David M. Cutler ’87, co-chair of the committee, addressed the situation in a comment in the Harvard Class of 1987 alumni Facebook group. His comment stated that the Gen Ed committee’s budget for non-FAS courses was cut by a third “even before the COVID crisis,” though Claybaugh had earlier stated that the cut occurred “this year.”

In an emailed statement, Cutler clarified that prior to the pandemic, the Gen Ed committee had been asked to moderate expenses for future years in response to the FAS’s already significant budget deficit and the rising costs of the new Gen Ed program launched in fall 2019. Despite the discourse on social media and the confusion surrounding the timeline and reasoning behind the policy changes, Merseth says she has not received further direct communication regarding the future of her course.

Aman A. Panjwani ’20, who signed the petition, is doubly disappointed by this decision as both a former student in the course and as a former member of the Gen Ed committee . When he sat on the committee in 2019-20, Panjwani saw firsthand the criteria used to review and approve courses.

“Undoubtedly — I can't say this in stronger terms — this course would have met the highest level of Gen Ed committee evaluation,” he says. “There are other courses that were nowhere near this threshold of quality that you could cut for funding reasons. This is not the one to go.”

To the authors of the petition, restricting Gen Ed 1076 to every other year exacerbates what they see as a stigma already surrounding educational studies at Harvard. “It just feels like the field of study I’ve chosen and the career path I’ve chosen is not valued at the College,” Pao says. “This is about a lot more than just one course.”

Paths to studying and pursuing a career in education at the College are few and far between. Founded in 2018, the Educational Studies secondary is one of only a few programs at Harvard dedicated to promoting careers in education. Over 80 percent of students in this secondary have taken Gen Ed 1076, according to Townsend.

“[The Gen Ed committee] didn't think about programmatic or curricular needs,” Merseth says, “because our course, the only course taught about K-12 education, is also a huge gateway course to both the Educational Studies secondary and the Harvard Teacher Fellows program . . . there's so few [alternatives] that it really is impactful.”

Julie A. Reuben, director of the secondary, wrote in an emailed statement, “There are a number of current courses that serve as entry points for students into the Ed Secondary and we are committed to work with faculty at FAS, HGSE and the other professional schools to continue to develop new courses that serve the needs of students interested in education.” In the series of events Cutler describes in his Facebook post, Reuben was consulted in advance and approved of cutting Gen Ed 1076 next year. Reuben responded in an emailed comment that Cutler may have “misunderstood” her involvement in the process. She clarified that when Hess told her about the decision that had already been made, she did not oppose it or try to get the Gen Ed committee to change it, explaining “I don't think it is appropriate for me as the director of the Ed Secondary to tell the Gen Ed program how it should make its decisions.” Cutler later stated that this portion of his Facebook comment had been in error.

Harvard Teacher Fellows, the other main program in education at the College, offers seniors and alumni funding and mentorship opportunities to launch their careers in teaching. The program’s Faculty Director Noah S. Heller explains, “Unfortunately, K-12 teaching is still not a high-status profession.” Surrounded by peers entering fields that offer greater pay and prestige, Heller says, students are implicitly discouraged from going into education.

Dashiell F. Young-Saver ’16, a former student in Gen Ed 1076 currently embarking on a career in teaching, puts it even more bluntly: “It’s a curse on your record to say that you work in a K-12 school, because how could you take such a Harvard degree and waste it?”

The “curse” that Young-Saver describes is supported by The Crimson’s most recent annual Senior Survey, which revealed that 63 percent of the Class of 2020 would enter the finance, consulting, or technology industries after graduation. Only 2 percent planned to work in education.

For Evelyn Wong ’21, Gen Ed 1076 was the gateway that changed her trajectory. Early in the pandemic, she founded the nonprofit CovEducation, a free mentorship service that supports nearly 4,000 K-12 students. For Wong, a neuroscience concentrator, Merseth’s course was critical to Wong’s realization that there are ways to have a meaningful impact on education beyond teaching. Merseth’s support for Wong continued after completing the course; Merseth has been a vocal supporter of CovEd since its inception last March. “CovEd would have never happened if I didn’t take [Gen Ed 1076],” Wong says.

Wong’s experience is just one of many such stories.

Panjwani now works at Schoolhouse.world, a platform founded by Sal Khan of Khan Academy to provide free tutoring to students across the globe. Young-Saver went on to teach AP Statistics and develop Skew The Script, a free and socially-relevant math curriculum. Pao is working on her Social Studies thesis focusing on civics education. Townsend will graduate this spring into the Harvard Teacher Fellows program. Wong still plans to become a scientist, but she envisions weaving teaching into her future work as a professor and into relationships with other students.

Despite their diverse set of experiences, all of these students say they found their start in Gen Ed 1076, and all look back on Merseth’s course as a turning point in their lives.

“At the heart of everything is that class, and Professor Merseth, and our community,” Young-Saver says. “And if you take the heart out, limbs will die.”