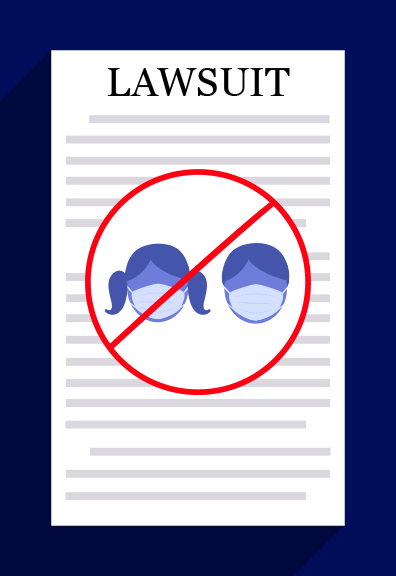 The Battle Against Masking Comes to Cambridge Schools

Several suits filed by Children's Health Rights of Massachusetts challenge mask mandates instituted in school districts across the state — at a time when debates over mask mandates in schools have engulfed the nation, ranging from parent petitions to physical protests and arrests at school board meetings.
By Anne M. Brandes and Kate S. Griem

New Hampshire-based attorney Robert M. Fojo has filed 12 lawsuits challenging school mask mandates in the past five months. His targets have included a Catholic school in Florida, school districts in his home state, and most recently, the Cambridge school district. Fojo filed the Cambridge lawsuit on behalf of the advocacy group Children’s Health Rights of Massachusetts.

Fojo, a Harvard Law graduate, filed the lawsuit on Sept. 19, in addition to four others. The suits challenge mandates instituted by the Massachusetts state education department, the city of Cambridge, the city’s school district, and other school districts — at a time when debates over mask mandates in schools have engulfed the nation, ranging from parent petitions to physical protests and arrests at school board meetings.

Run by a team of anonymous parent volunteers, CHRM was founded in August 2021. “Our first objective is to fight illegal and cruel school mask mandates,” reads the organization’s mission statement. CHRM claims its membership includes teachers, frontline healthcare workers, police officers, business owners, and veterans,” according to its website.

The CHRM lawsuit contends that the Massachusetts Department of Elementary and Secondary Education and Cambridge schools lack the authority to enact mask mandates. In several recent, similar cases, federal and state courts in Arizona, Pennsylvania, South Carolina, and elsewhere have ruled in favor of school mask mandates.

A large part of Fojo’s case centers on a contentious argument that masks are both ineffective for stopping the spread of Covid-19 and potentially harmful to children. Citing a study from the Centers for Disease Control and Prevention conducted in Georgia, the lawsuit argues that “measures like social distancing, classroom barriers, HEPA filters, and forcing students to wear masks did not result in a statistically significant benefit.” Although the CDC report documented that the correlation between in-school mask mandates and lower coronavirus case levels was not “statistically significant” among younger students, the report noted a “21% lower incidence [of Covid] in schools that required mask use among students” than in schools that didn’t.

The lawsuit also cites journalist David Zweig’s New York Magazine article “The Science of Masking Kids at School Remains Uncertain,” using it to make the controversial claim that mask mandates have been consistently debunked. Zweig’s article argues that there is no “evidence of more outbreaks” in countries that allowed students to unmask, including some of America’s peer nations.

The lawsuit challenges State Education Commissioner Jeff Riley’s mask mandate for school buildings instituted on Aug. 25, which Riley recently extended through Nov. 1. The update stipulates that schools with a vaccination rate among staff and students of 80 percent or higher will be able to unmask as early as Oct. 15. Since children under 12 are not authorized to be vaccinated, only middle and high schools could qualify for unmasking.

When asked for contact information of CHRM parent organizers, Fojo responds that “the organization asked me to speak in their stead, so I don’t think that anyone will be commenting from there.”

According to Fojo, CHRM parents decided to sue as a “last resort” after they found school committees unreceptive to their complaints. The parents “don’t believe [a mask mandate] is necessary, and they believe it’s harming their children,” he says.

When asked to estimate the levels of support for anti-masking efforts in general, Fojo replies that although he could not supply any numbers, he’s observed that “the energy is very palpable,” adding that “there are many more parents that support this position than people believe.”

An August 2021 poll by the MassINC Polling Group of registered Massachusetts voters found that 81 percent supported requiring masks for anyone entering a school building, while just 12 percent opposed the proposal.

Fojo’s legal strategy is multi-pronged. To him, one key limitation for mask mandates is statutory authority: “There’s nothing in the statute governing school districts and school committees that enables them to pass these broad health measures,” he asserts.

He also argues that the “broad scheme” of authority granted to the Massachusetts Department of Health in the area of infectious diseases “preempts any action by other local institutions” in that field, including the state education department. According to Fojo, since the DPH has not initiated a school mask mandate, no subordinate institution has the right to do so.

Fojo is also making a constitutional argument that mask mandates “infringe on parents’ fundamental rights concerning their children.” He adds that masks “cause [students] anxiety and stress” and “inhibit social development and social interaction,” among other “psychological, mental and emotional impacts.” Fojo cites negative physical impacts of mask-wearing, too, such as “increas[ing] the amount of carbon dioxide that one intakes” and higher levels of acne.

Those claims have been disputed by several studies. A study conducted by the University of Wisconsin-Madison on children between the ages of seven and 13 in which participants were asked to identify facial expressions from photographs found that “masks are unlikely to dramatically impair children's social interactions in their everyday lives.” Post-doctoral fellow Ashley Ruba, one of the Wisconsin-Madison study’s authors, strongly believes that social isolation among children should be a much bigger mental health worry than mask-wearing.

The CDC notes that CO2 molecules are small enough to “easily pass through mask material,” while Covid-19 respiratory droplets are not. A report published in the International Journal of Environmental Research and Public Health similarly found that “wearing a medical-grade mask does not appear to impact blood oxygen or carbon dioxide concentrations.” The report concluded that “in healthy populations, wearing a mask does not appear to cause any harmful physiological alterations.”

It did, however, acknowledge potential psychological impacts of mask-wearing, noting that these “may contribute to the controversy associated with wearing masks during the COVID-19 pandemic in the United States.”

Another suit seeking to end mask mandates filed in Hampden County by The Family Freedom Endeavor, by contrast to the CHRM lawsuit, was more narrowly focused. The Hampden lawsuit only uses jurisdictional reasoning to substantiate their claim.

In a Change.org petition entitled “No Mask Mandate for Easton Public Schools — Parental Choice!”, CHRM wrote, “as parents, we have to look no further than ourselves to find who has the very best interest of our children in mind.” The group added that there are “countless qualified medical professionals on BOTH sides of the argument. And… their opinions often change!”

In a Sept. 14 update to the petition entitled “Big Update — Lawsuit Pending,” CHRM explained it had been working “behind the scenes” on legal challenges to mask mandates and requested donations for the Easton School District portion of the lawsuit fund.

In the same MassINC poll reporting broad support for mask mandates in Massachusetts schools, 85 percent of Democrats supported requiring masks to enter schools compared to 69 percent of Republicans; a nationwide poll by AP News found the partisan divide may be as high as 80 to 30.

“The masking debate in the United States is uniquely political and tribal in a way that it is not elsewhere,” Zweig says in an interview. “That doesn’t mean that there isn’t dissent or some degree of argument about this in other places, only that it has not taken on the binary left-right dynamic with such vehemence as it has in the United States.”