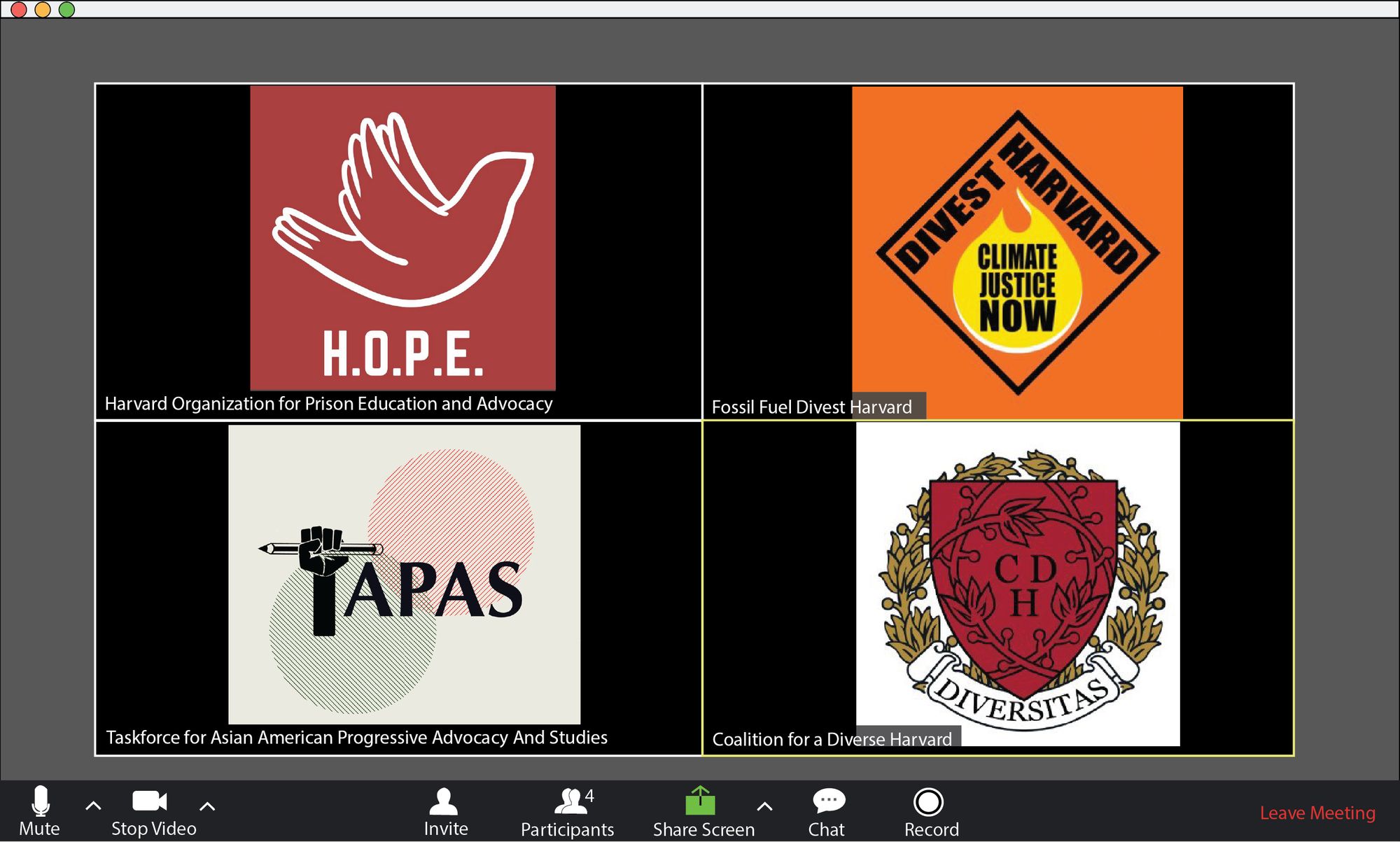 The Power and Powerlessness of Remote Activism During COVID-19

“You’re scattered all over the country, all over the world. You’re literally taken away from the community that you’re trying to organize in,” says Zoe L. Hopkins ’22, incoming president of the Harvard Organization for Prison Education and Advocacy. “The meaning of community organizing just changes completely.”
By Kevin Lin and Elyse D. Pham

“You’re scattered all over the country, all over the world. You’re literally taken away from the community that you’re trying to organize in,” says Zoe L. Hopkins ’22, incoming president of the Harvard Organization for Prison Education and Advocacy. “The meaning of community organizing just changes completely.”

Before the onset of the COVID-19 pandemic, members of HOPE served as tutors at local correctional facilities every week — a program central to the organization’s educational mission. Yet with rising infection rates and widespread panic, those facilities went on lockdown. Even if students had remained in Cambridge, it would have been impossible to continue tutoring.

The pandemic’s disruption of the program requires a “huge reconfiguration of the way that we operate,” Hopkins says. “It really gets at the undergirding goals of our organization — just not being able to do any of the education work as normally anticipated.”

Claire E. Pryor ’22 a member of Fossil Fuel Divest Harvard recounts a similar experience. The organization had been ramping up its efforts and “planning huge things for Earth Day 2020,” she says — the date by which the group had called on Harvard to divest from fossil fuels.

Its plans were upended. “One week before campus shut down, we thought, ‘maybe we need to start thinking about alternative plans for how this can work on Earth Day,’” she says. “And then one week later, it turned out that actually, our alternative plans were going to need to be a lot more alternative than we had realized.”

Fossil Fuel Divest ended up holding a Zoom rally for Earth Day, drawing over 90participants and featuring speakers from a diverse array of fields. But despite the event’s success, finding virtual substitutions for other in-person activities has still proven difficult.

Pryor says FFDH has struggled with “this question of how to keep our campaign really accessible to folks who don’t have internet connection or devices that they can use, or a stable home environment where they can feel comfortable and safe organizing.” The organization normally engages various communities outside of their organizing team with their mission, Pryor claims, and since going remote, they have placed an even greater emphasis on “how we can still be open and continue to involve those folks.”

Moreover, maintaining internal engagement within Fossil Fuel Divest itself is “hard because our work is so oriented around us as a community,” Pryor notes. Usually, meetings are followed by community dinners, and members spend lots of time hanging out with each other. But Pryor says COVID-19 has forced her to recognize that as an advocate hoping to effect change, “the best thing we can do to help the most people is to stay inside and not see anybody else and not talk to anyone. But that’s such a powerless feeling.”

Despite the obstacle that the pandemic has posed to campus advocacy organizations, many activists feel as if it has underscored the relevance of their work. Jeannie Park ’83, a board member of the Coalition for a Diverse Harvard — of which the Harvard Ethnic Studies Coalition is part — notes that “the disproportionately negative outcomes for people of color, communities of color, demonstrate so clearly why Ethnic Studies is necessary.”

“Students need that academic background in order to fully understand what happened,” Park explains. “And also to go on and be the leaders who make the policy decisions and the policy changes so that this doesn’t continue happening.”

Following the suspension of Harvard’s search for Ethnic Studies scholars during the pandemic, Michael J. Williams — also a board member of the Coalition for a Diverse Harvard — says, “We’re looking at having to re-energize ourselves and mobilize alumni and others to push to get it restarted as soon as possible.” For instance, they garnered hundreds of alumni in attendance of their event, “Race and the Pandemic Presents: On the Frontlines,” with roughly 100 people participating in the presentation.

The Taskforce for Asian American Progressive Advocacy And Studies has also found itself both grappling with and addressing the inequalities highlighted by COVID-19. Before its activism turned virtual, TAPAS was planning a discussion about the impact of the virus on Asian American communities. Eric Zheng ’23, a member of TAPAS’s Meta-Coronavirus Committee — created to determine what other committees might be needed to address the pandemic — says that now the organization has “moved it into more of a video project, where people will submit their voices and opinions on anti-Asian racism. We’re putting it into a compilation of videos. We’ve basically made it more adapted to technology.”

TAPAS also led an online panel titled, “Asian American Resistance and Creative Clapbacks in the Time of COVID-19,” which was co-sponsored by Harvard’s Asian American Association and the Boston Chinatown Neighborhood Center Pao Arts Center. Attended by more than 125 people, the panel discussed the history of Asian American arts and resistance and how it has manifested during the current COVID-19 crisis. Co-organizer for TAPAS, Liana E. Chow ’21, notes, “We had so many generations of Asian Americans and Asian American artists there,” including faculty members, professors, and artists from other universities. The remote platform ultimately lent itself to this kind of expanded engagement.

This focus on collaborating with off-campus groups remains consistent in HOPE’s online advocacy work as well. Despite the suspension of their education program, Hopkin says that HOPE has been “working really hard to maintain the coalitions that we’ve been building outside of Harvard’s walls during the pandemic, because a lot of the organizations that we work with are in communities like Dorchester, like Roxbury, like Mattapan, where folks are largely in low income, black and brown communities.”

For Hopkins, HOPE’s work has become especially relevant given that “incarcerated people are hyper-vulnerable to this pandemic, considering that social distancing is impossible in jails and prisons,” she explains, referencing figures from the federal Bureau of Prisons that found that 70 percent of individuals incarcerated in federal prisons who tested for COVID-19 had the disease.

Throughout the past several weeks, HOPE has organized a project to free incarcerated individuals by raising bail funds. “Bail funds are pretty localized. What we did was compile a directory of bail funds that people could donate to in their local area,” Hopkins says. “Then we just did a massive public campaign saying, ‘If you can please click on this link, find your state, and proceed to donate to your local bail fund.’” Hopkins was excited to see the graphic they used widely circulated on a number of platforms.

In light of the pandemic’s exacerbation of social inequalities, Hopkins feels that “in some ways, we started working harder after we were evicted from campus because the kind of work we’re doing just became so much more urgent.” When it comes to carceral justice, the effects of COVID-19 have “reaffirmed for us that doing any anti-prison work is doing life-affirming work.”

Echoing Hopkins, Pryor explains that COVID-19 has increased the gravity of her work with Fossil Fuel Divest Harvard — now she has ten divestment meetings a week. It’s “simultaneously an energizing and empowering thing to do,” she says. The sense of unity and mutual support among her and her team, she says, have been “an antidote to the feeling of powerlessness” that she feels because of the pandemic.

“I can still be doing something to create a better world,” Pryor emphasizes. “That helps me feel grounded every day. And I think that that’s true for many of the people in our campaign.”