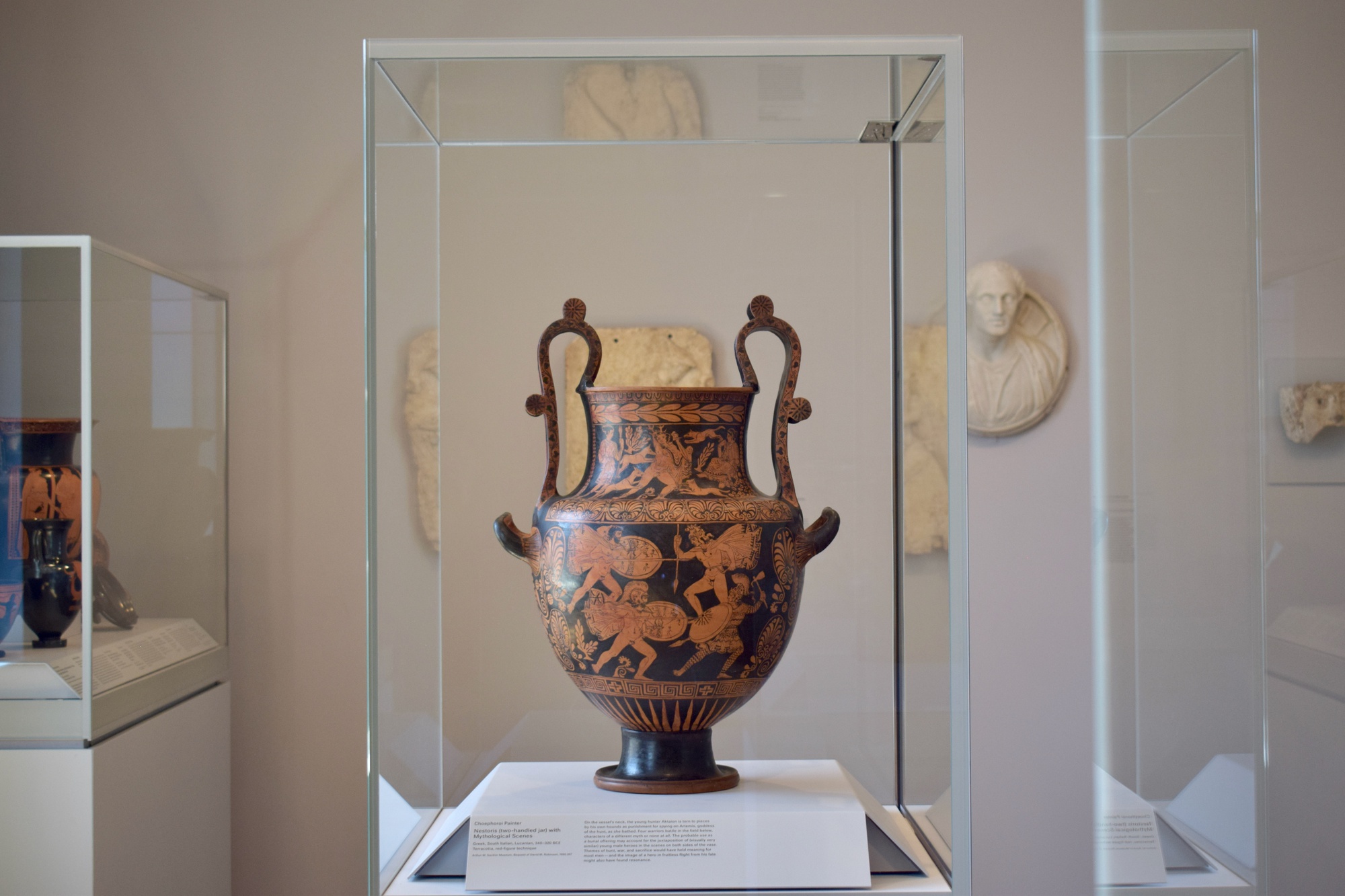 Vases, but Make It Sexy

The room we are in contains, as our tour guide explains, the majority of the museum’s antiquity holdings. We’re here on the official tour that was advertised on Eventbrite as the “Sexy Vases Tour for Parents.”
By Olivia E. Gopnik-Parker

I’m on the third floor of the Harvard Art Museums, staring intently at the black and tan phalluses that pepper an ancient Greek vase decorated with the Return of Hephaistos to Olympos. Suddenly, someone in the room has a visceral reaction: a strained, sustained wail.

Perhaps an odd response to art, except that I’ve entered the room with a cohort of adults, a tour guide… and some babies.

The room we are in contains, as our tour guide explains, the majority of the museum’s antiquity holdings. We’re here on the official tour that was advertised on Eventbrite as the “Sexy Vases Tour for Parents.”

This title, prior to my arrival at the museum, provided me with little tangible sense of the event’s focus. The only preview I had was a brief description explaining that the tour would “welcome hungry babies, crying babies, sleeping babies” and, of course, a number of my own personal questions: Why vases? Why sexy vases? Who decided that parents and ancient Greek eroticism were a natural pairing? How did babies get mixed up in all of this?

The day before the tour I got on the phone with my guide, Renana Kehoe, who doubles as the founder and executive director of Parent Tours. Her company, she explains, “offers tours for parents to attend with their newborn babies at different museums and cultural institutions around the Boston.”

When I asked Kehoe point-blank to explain the unusual impetus behind the sexy vases tour, she responded,“When you’re a new parent, you just really miss talking to adults about adult things.” I wondered, but did not ask, what she meant by “adult things.”

On the day of the tour, Kehoe greets me near the front door with a “Parent Tours” sign and a clipboard. We make small talk until the rest of our tour group shows up — one couple with a stroller and a mother in a baby bjorn. Renana explains to me that two couples had canceled last minute — a common occurrence, she explains, when babies are part of the schedule. Before we embark, Kehoe shows us a picture of her own young son. The significance is clear: Babies will be the centerpiece of our tour, around which the sexy vases merely revolve.

At our first tour stop, Kehoe explains with an air of disbelief that the tour’s Facebook event was taken down for “inappropriate content.” As the tour progresses, I understand her incredulity. Besides the few moments when Kehoe draws our attention to oversized centaur erections, the whole thing does feel more educational than sensual. 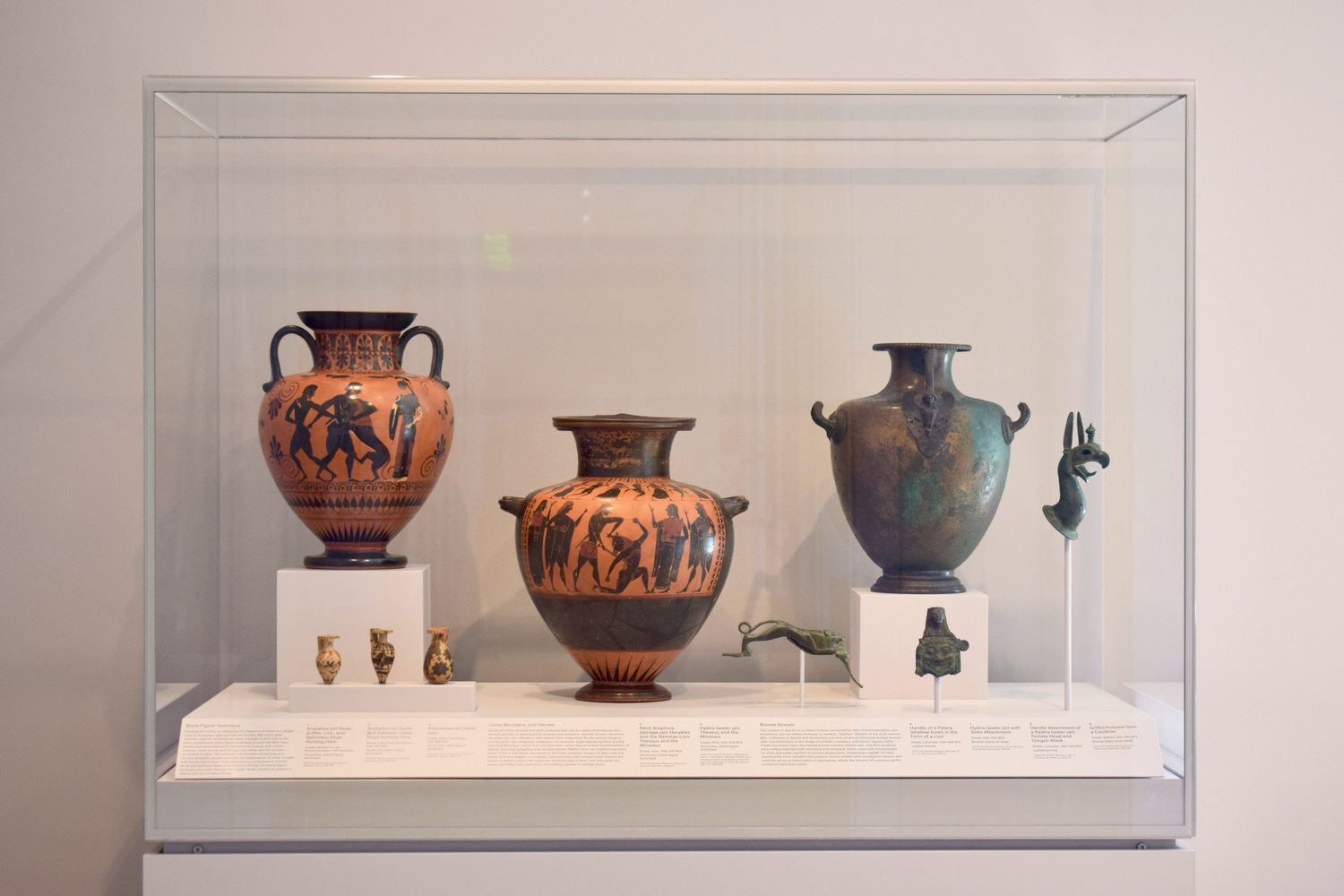 The Greek vases are located on the third floor of the Harvard Art Museums. By Ellis J. Yeo

Kehoe begins by offering a brief primer in Greek history, explaining to us the differing artistic techniques at play. At each stop, she details the mythic lore that inspired each lewd scene. I learn the differences between black and red figure engraving, the importance of the proportionality of the Greek male nude, and even that the Greeks mixed their wine with water so that they could drink more, and for longer (a tip Kehoe seems to subtly address towards me).

As we move through the third floor, I get to know my fellow tour attendees. The couple is attending with their six-month-old. The father is quick to explain to me — when I ask what drew them to these bawdy urns — that he had been a Latin nerd in high school and loves to learn about “this stuff,” signaling his awareness that attending solely for the centaur erections, as it might appear to him I have, would be uncouth. His wife nods enthusiastically at each tour stop, and her vigor extends to consistently answering Kehoe’s rhetorical questions.

The other woman on the tour is more mysterious, rarely cracking a smile at any of Kehoe’s quips. When her baby starts crying in the face of a wine and water mixing pot, Kehoe smiles energetically, encouraging the mother to let the infant holler on.