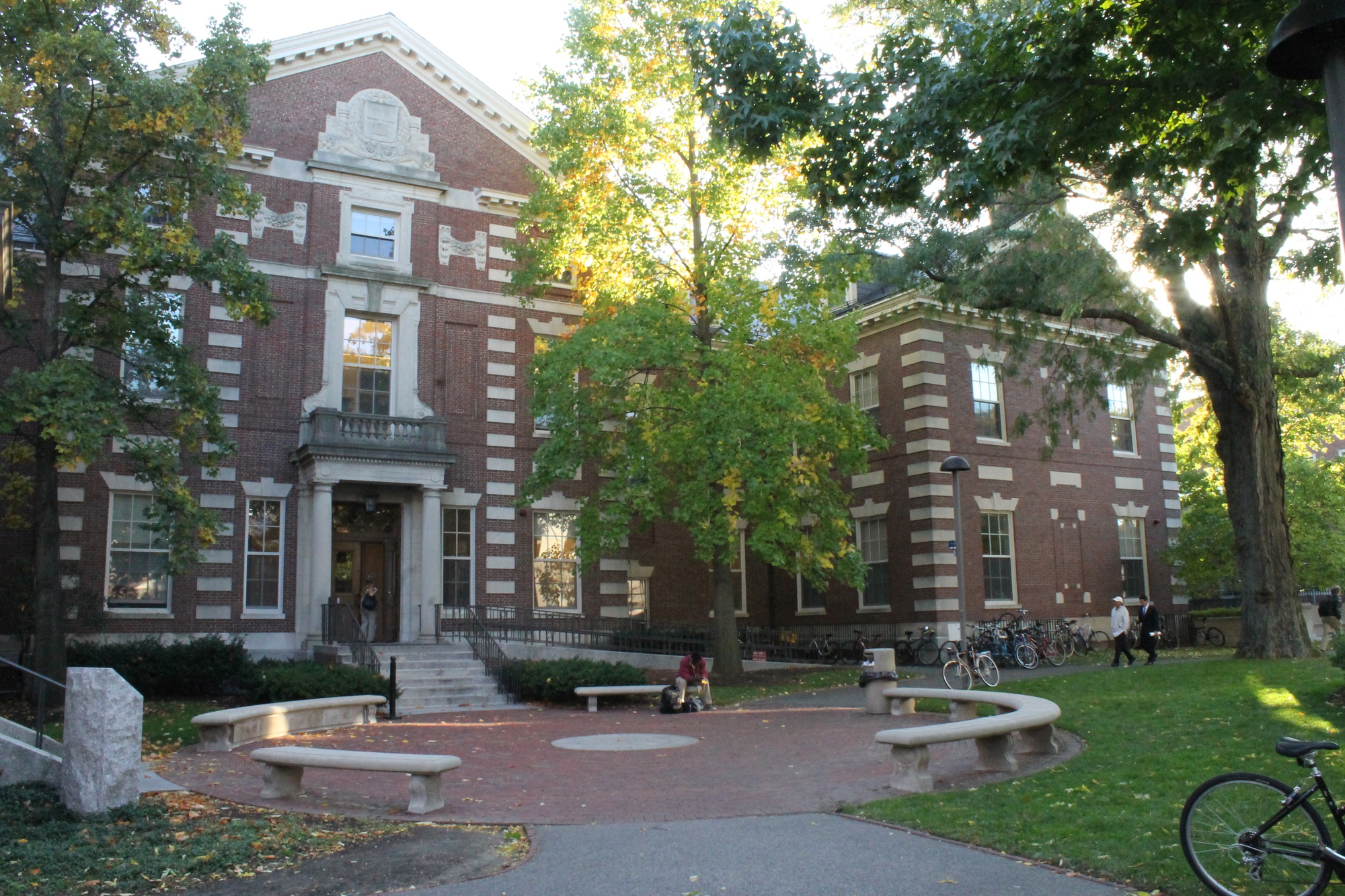 This saga began when the Barker Center was not the humanities mecca it is today, but rather the Harvard Union—a new social club on campus.
By Hillary A. McLauchlin

Students trickle into the Barker Center Café for their latté of choice and a “Fern’s Problem Solver” sandwich. With its eclectic wood furniture and warm lighting, the space promises the most bang for your BoardPlus (in terms of ambiance). Every English concentrator you know raves about it. Daily.

Despite its current art-centric programming and beatnik spirit, the Barker Center for the Humanities’ ornate fireplaces and elaborate antler chandelier provide a glimpse at its storied past. This saga began when the Barker Center was not the humanities mecca it is today, but rather the Harvard Union—a new social club on campus.

“Never in all its history, it is said, have Harvard men been united as they are at the present time,” reads a 1902 New York Times article. The Harvard Union, barely two years into its existence, seemed well on its way to cure the social ills that formed the impetus for its conception as a clubhouse where all Harvard men, regardless of social class, could meet “on equal footing.” Featuring smoke-filled dining and common spaces, a library, and a billiards room (with the option of professional coaching), the Quincy Street clubhouse was open to all Harvard students for a $10 yearly membership fee.

In 1895, writing for The Harvard Graduates’ Magazine, historian W.R. Thayer ’81 first proposed the construction of a university club based on models at Cambridge and Oxford. Thayer cited the growing student population of the University as the cause of a social shift in 1877 during which “‘Society’ and ‘non-society’ men were pitted against each other” in a series of student elections. This discontent extended to the growing number of men, excluded from final clubs and other elite groups, who formed a myriad of smaller social organizations. Thayer believed these groups, including the mysteriously named “Mermaid” literary club, threatened overall unity.

One writer for The Harvard Advocate in 1895 penned an article calling for an improved dining establishment but doubting the Union’s potential as a social club, claiming that “There are too many social clubs at Harvard already and the greater part of them tend directly to develop snobbishness and exclusiveness,” he wrote.

After considerable debate, Thayer’s vision for The Union came to fruition with a $150,000 donation from Major Henry L. Higginson, the founder of the Boston Symphony Orchestra. Higginson proclaimed his egalitarian hope to create a club where “pride for wealth, pride of poverty, and pride of class would find no place.” As reported in The Crimson, the Union building was constructed equidistant from the elite “Gold Coast” student dorms and those in the yard.

Quoted in the Boston Herald at the announcement of the Union, Governor Roger Wolcott “emphasized the effect which such association would have in the breaking down of prejudice and obliteration of animosity.”

The University and Higginson’s attempts at “social reform through architecture” proved a fraught experiment in the early 20th century as membership in the Union began to decline while Harvard final clubs maintained social dominance. The building, though, also provided space for student extracurricular clubs. Its basement housed the offices of The Crimson, then led by FDR, despite concerns over the “editorial integrity” of the space and potential for conflict of interest.

The establishment of the University’s housing system in the 1930s, a precursor to today’s setup, dealt the final blow to the Union, after which Harvard converted the space into a freshman activity and dining center. The building that Henry James had referred to as a “great, grave, noble hall,” became a center of freshman debauchery. As reported in Harvard Magazine, underclassmen threw butter at the ceiling chandelier (narrowly missing an antler ceiling chandelier, a rumored gift from Teddy Roosevelt) to see if it would stick.

With its new freshmen focus, the Union building became a social hub in its own right featuring banquets, lecture series, dances, and the publication of the now-defunct freshman magazine, The Yardling.

According to meeting minutes from the late 1950s, Freshman Union topics of discussion including “beer throwing” at the annual “Smoker” dinner, warranting the committees’ recommendation that “[...] the supply of beer either be cut down comparably or be cut off earlier when things start looking explosive.” Other contentious discussions included whether or not “Bermuda” shorts would be permitted in the space.

After a $23-million-dollar renovation in 1996 and the designation of Annenberg as the freshman dining hall, The Union became the Barker Center for the Humanities. As reported by Harvard Magazine, debate over the building’s use reignited after the formation of the Committee to Save the Great Hall of the Freshman Union. A member of the group, H.A. Crosby Forbes ’50, decried the renovation and considered it “an act comparable to homicide.”

While the space never became the democratic social center that its founders envisioned—and exclusivity in social life remains a point of campus discussion—the Barker Center has carved out its own distinctive space at Harvard. The Barker Café dabbled once again with egalitarianism with a free coffee program, brought to an abrupt end in 2009. Perhaps with BGLTQ open mic events in the Café and its commitment to providing a space conducive to artistic expression, the Barker Center of today promotes an ideal of inclusivity that goes beyond that of its predecessors.

“Yea, this is the House of Fellowship/Binder of bonds that ne’er shall slip,” read Charles Warren, class of 1889, at the dedication of the space in 1901. “Symbol of Harvard Loyal, House of Good Fellowship—Welcome to thee!”