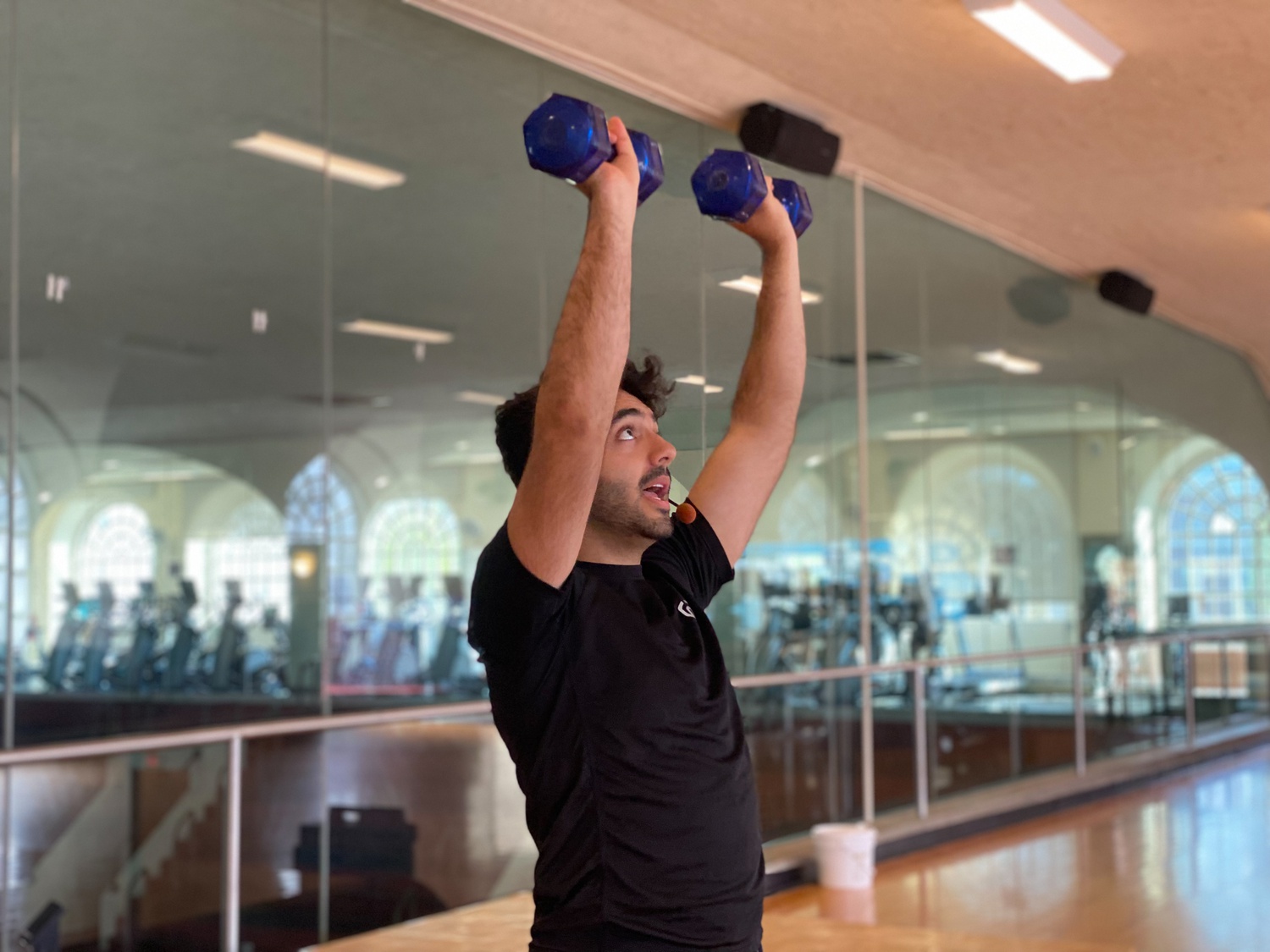 Matine Khalighi is on the Move

Freshman Matine Khalighi is one of only three undergraduate fitness instructors and teaches seven to nine classes per week.
By Huong T. Le

Matine Khalighi ’25 was only 14 when he decided to become a certified fitness instructor.

“I was a chubby middle schooler, so my mom would drag me to the gym to attend her classes. I had a lot of fun with group fitness and was the youngest person working out with adults in their twenties, thirties, and even forties,” Khalighi says.

Now a freshman at Harvard, he is one of only three undergraduate fitness instructors on campus and teaches seven to nine classes per week across the Harvard Recreation facilities. 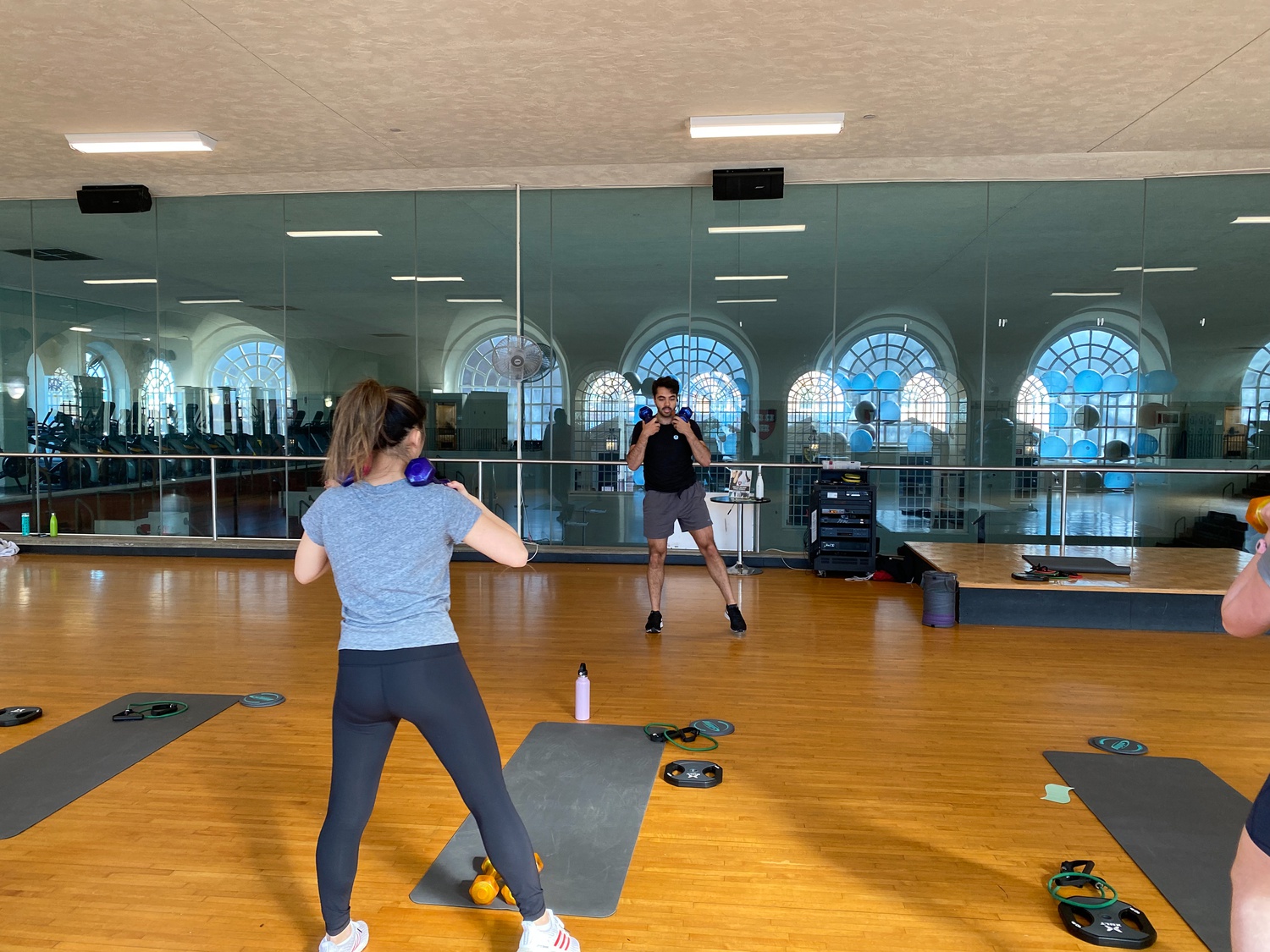 The summer before high school, Khalighi decided it was time for him to learn how to teach fitness classes. But he struggled to find a certification program that would take him on, since most general fitness programs are restricted to adults. He eventually signed up to train under the Les Mills BodyPump instructor training program.

“I had to reach out to the manager of my fitness gyms, other nearby gyms, and even the HR Director of Les Mills to ask for enrollment permission,” he says.

After attending many training sessions, auditioning at local gyms, and substituting for other instructors, Khalighi eventually led his first general fitness class a few months later. Now, with six years of experience under his belt, he confidently walks people through various strength, cardio, HIIT, and core conditioning sessions at Harvard.

Since the start of the school year, Khalighi has been juggling fitness and teaching on top of a heavy course load. Despite his busy schedule, fitness is still a core part of Khalighi’s college routine. “I don’t look at fitness as part of my extracurriculars. It’s an important part of my health, confidence, and lifestyle,” he says.

Before teaching a class, he makes a mental outline of what he wants his students to focus on.

“I want to be strategic with what I am pushing them to do, so they can see the progression from their hard work from last week,” Khalighi says. “At the same time, I'm also cognizant of how much I should push them every week.”

He acknowledges that regularly teaching fitness classes can strain the body and therefore strives to strike a balance between his job and health. “I have to figure out which days am I pushing hard and which days am I just the instructor facilitating a group,” he says. “[It’s important to] give your body also the grace that you’re not going to get stronger overnight, and it’s going to take some time before you start seeing the results.” 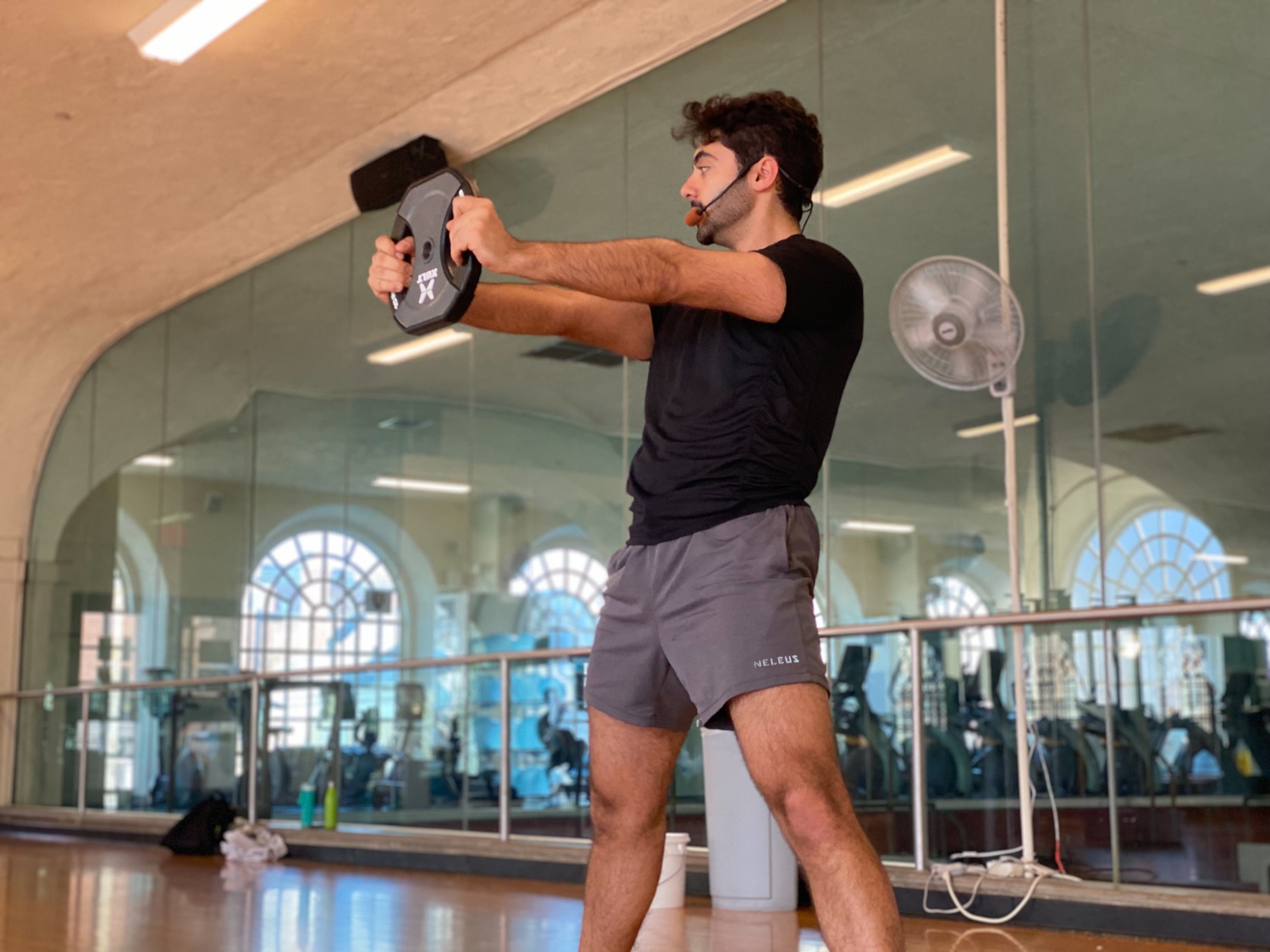 Khalighi has been a certified fitness instructor since the age of 14. By Sophia C. Scott

In addition to getting to challenge himself physically, a major reason he enjoys the job is the opportunity to empower others to improve their fitness. Every week, Khalighi strives to foster a competition-free community in his studio space, where everyone can come together and challenge themselves regardless of their body type or strength level.

According to Khalighi, the most rewarding part of the job is seeing the excitement in the studio and hearing people cheering each other on as class progresses. His Monday classes at the Hemenway gym are usually the liveliest, he says, as they are attended by his regulars who come back every week.

Besides the communal aspect, Khalighi says teaching fitness has had a huge impact on his and others’ mental wellbeing. He sees fitness as an opportunity for both him and his students to focus inward instead of comparing themselves to others.

“At Harvard, it’s so easy to be bogged down by so many things, but when I enter the studio, I leave whatever upsets me at the door,” Khalighi says. “The feeling everybody feels after working out is very good. You feel strong. You open up so many mental spaces.”

Khalighi intends to continue leading fitness classes throughout his four college years and even beyond his time at Harvard.

“Getting to where I am right now does take a long time and preparation, but it’s very rewarding,” he says.