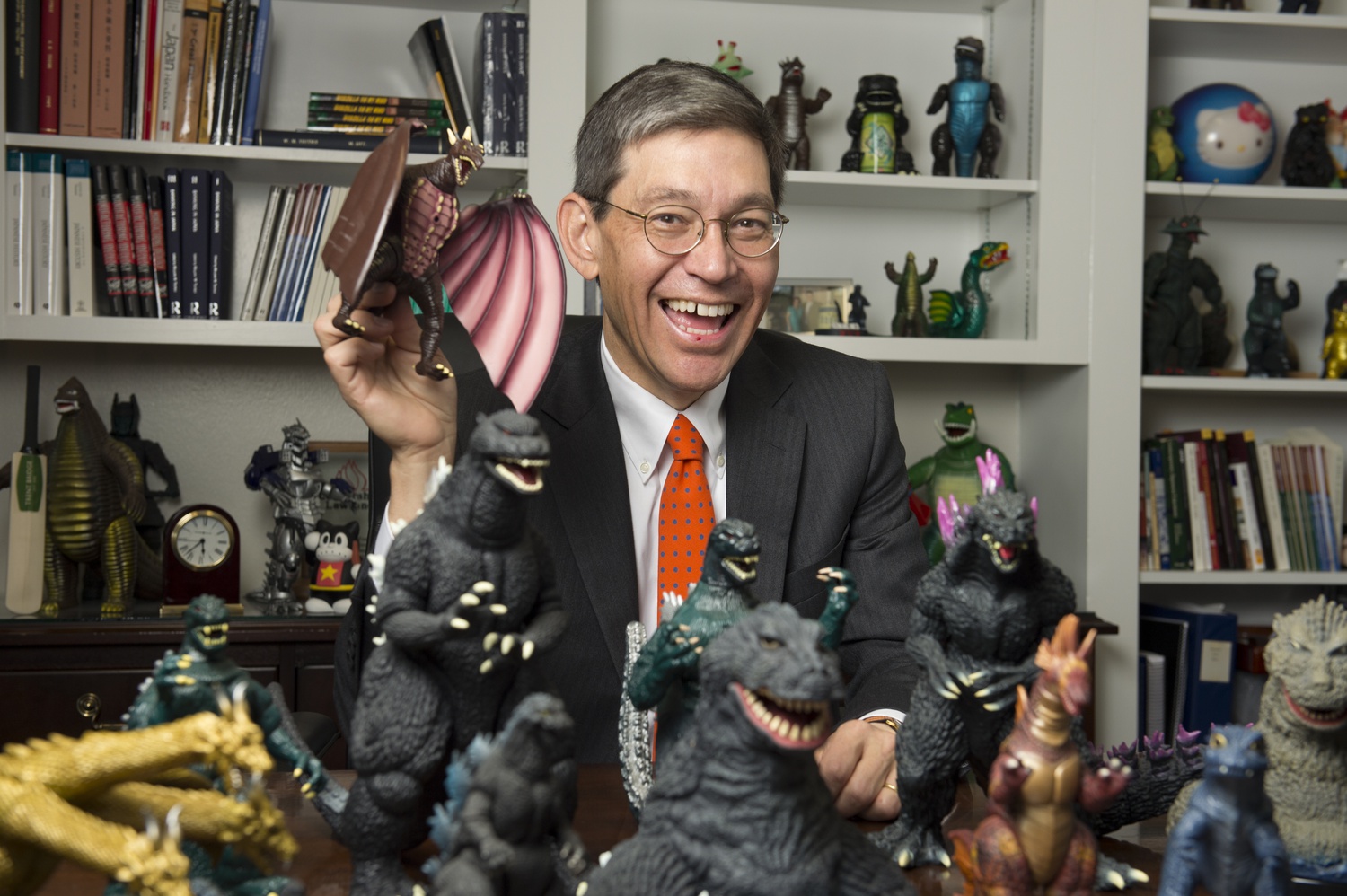 What do Hello Kitty, Astro Boy, and Pokémon all have in common? Godzilla paved the way for them to cross the sea from Japan and make waves in the United States, says William M. Tsutsui ’85, a visiting professor of Japanese Studies and East Asian Languages and Civilizations at Harvard. For Tsutsui, Godzilla has been a source of inspiration for almost his entire life.
By Dannie C. Bell

William M. Tsutsui ’85 saw his first Godzilla movie when he was seven or eight years old. He remembers it very clearly: it was a Saturday afternoon, and he was lying on the blue shag carpet in his parents’ bedroom watching the “big old TV set” when the Creature Double Feature came on. There he was — Godzilla walking through Tokyo. “I just fell in love,” Tsutsui says. “I wanted to be the monster, I wanted to be big and huge and mean and gigantic, and knock down buildings and drag my feet through Tokyo.”

Growing up in a small town in central Texas, Tsutsui did not meet many other Japanese American families. Before the film came out, the only thing his friends really knew about Japan was Pearl Harbor, for which Tsutsui was extensively taunted. However, he and his friends all agreed that Godzilla was “pretty cool.” Godzilla became something about Japan Tsutsui felt he could be proud of, a foundation of his identity as a Japanese American.

Teaching a course on Japanese monsters has been a lifetime ambition of Tsutsui’s. Previously, he channeled his passion for Godzilla into his 2004 book, “Godzilla On My Mind: Fifty Years of the King of Monsters,” written in honor of the 50th anniversary of the series. It traces the history of the 30-plus Godzilla movies made over the course of more than half a century. Tsutsui surveyed Godzilla fans across the country about why they loved the movies so much. The overwhelming response was: Godzilla is heroic. He is admired for the universal values that he represents, and is seen by many as a strong character who stands up for what he believes in, and usually wins. “It’s crazy sometimes to think that this is the star of one of the oldest and longest-running film franchises in world history — a radioactive lizard from Japan portrayed for many decades by a man in a rubber suit,” Tsutsui says. “It is phenomenal that people have come to identify with this creature so deeply.”

The idea for his course “Japanese Monsters” began with his interest in Godzilla, Tsutsui notes, but Japan has a rich folkloric tradition of monsters. Today, Japanese monsters “are everywhere,” he says. The course covers monsters of Japanese legendary and literary sources, like The Tale of Genji, as well as international icons like Hello Kitty, “which is pretty monstrous to me.” All in all, Tsutsui says, there is “a lot of opportunity to explore Japanese history and culture from unexpected angles.”

Given two picks for his favorite Godzilla movie, Tsutsui would go with “Gojira” as the first. The original film, released in 1954, had a somber political message. A warning to humanity about the dangers of nuclear warfare, it channeled anxiety in the wake of the bombings of Hiroshima and Nagasaki, and addressed traumatic memories of World War II. Godzilla was a prehistoric creature that had survived on the bottom of the ocean until provoked by an atomic bomb to terrorize unsuspecting civilians. The harmful effects of nuclear weapons were visually evoked through the appearance of Godzilla. Tsutsui says the monster’s rough skin has been said to resemble the scars from radiation that survivors of Hiroshima and Nagasaki had. “Audiences who went to that movie often came out in tears,” Tsutsui adds.

When “Gojira” came to the U.S. as “Godzilla, King of the Monsters!” in 1956, it was the first Japanese movie to have success at the American box office. Before then, Japanese films that had been subtitled and released were shown in art house cinemas and, while some were critically acclaimed, they were never popular. Godzilla got the masses interested in Japanese culture. Hollywood distributors found that they could source quality materials from Japan very inexpensively and make a good profit, as they later did with Astro Boy, the first anime series to play in the U.S. “All the rest of the Japanese pop culture that we have absorbed since then really flowed in this slipstream, beginning in the 1950s,” Tsutsui says.

Some have described the process through which Godzilla was brought to America as “censorship” or “whitewashing,” terms that Tsutsui does not deem entirely inappropriate. The distributors edited it substantially for American release, cutting out “all of the political commentary.” They chose not to use subtitles because “kids don’t like reading their movies,” and dubbing would be cheesy. Instead, they decided to insert new footage shot in Hollywood featuring movie star Raymond Burr as an American reporter in Tokyo narrating the attack of Godzilla.

“What they did was extraordinarily clever and very sophisticated,” Tsutsui says. Even the endings of the two versions of the movie are pointedly different. “Gojira” ends in a threatening manner, because although the monster is defeated, the movie hints that more Godzillas could come back again if nuclear testing continues. “King of the Monsters,” on the other hand, contains a “sunny, Hollywood happy ending,” Tsutsui says, in which the monster is destroyed so that everyone can be safe and happy forever after. “The critical edge of the Japanese film was lost in the transition,” Tsutsui adds, “and since that original film wasn’t released in America until 2004, it took people a long time to discover just how good that original Godzilla film was.”

Tsutsui’s second favorite film is “Godzilla vs. Hedora.” Ripe with psychedelic wackiness, it is truly a gem of the early 1970s. At the same time, it is a foreboding reflection on pollution and the threat to the environment posed by industrial forces. Even as stunts like Godzilla flying on his tail make the movie “a little bit crazier” than previous films, it is very much a wake-up call.

Godzilla has continued to morph over subsequent decades. In Tsutsui’s opinion, the changes in the Japan-made Godzilla movies reflect changes to Japanese society that have occurred since World War II. Back in the 1950s, when the first film was made, Japan was vulnerable and trying to recover from World War II. “There’s sort of a darkness that hangs over the movie, a kind of uncertainty, and fear, really,” Tsutsui says. By the 1960s, however, as the Godzilla series was “pick[ing] up steam,” the economy was growing rapidly and there was a new sense of confidence in Japan. 1964 brought Japan’s re-entrance into the world community through the Tokyo Olympics. At that point, the Japanese people did not want to see monsters tearing a hole through their capital city. Thus, Godzilla was remade as a hero, a defender of Japan's prosperity and something more humorous than terrifying. In recent decades, Godzilla has been remade yet again. Tsutsui suspects that Godzilla has even performed the role of a “conscience” for Japan, knocking down the symbols of regained prosperity to keep the Japanese people humble.

The beauty of Godzilla, Tsutsui attests, is that he is so flexible. Over the decades, the character has been continuously reborn. In the 2014 film “Godzilla,” he defends the U.S. against a threatening species of creatures from outer space. In the most recent film from Japan, “Shin Godzilla,” Godzilla’s lingering presence is an ominous sign of government inaction. The movie is a “very powerful critique of Japan’s unresponsive political class,” says Tsutsui, and speaks to the desire for younger, more engaged leadership.

To Tsutsui, the Godzilla series is about resilience — the resilience of a monster that keeps coming back, but more importantly, the resilience of Japan. “Japan is a society that has proven itself to be remarkably sustainable and agile,” Tsutsui says, even when faced with tremendous challenges, including the atomic bombings of 1945 and the natural disasters of 2011. “The Japanese have found a way to roll with the punches successfully,” he says, “and Godzilla symbolizes that powerfully.”

— Staff writer Dannie C. Bell can be reached at dannie.bell@thecrimson.com