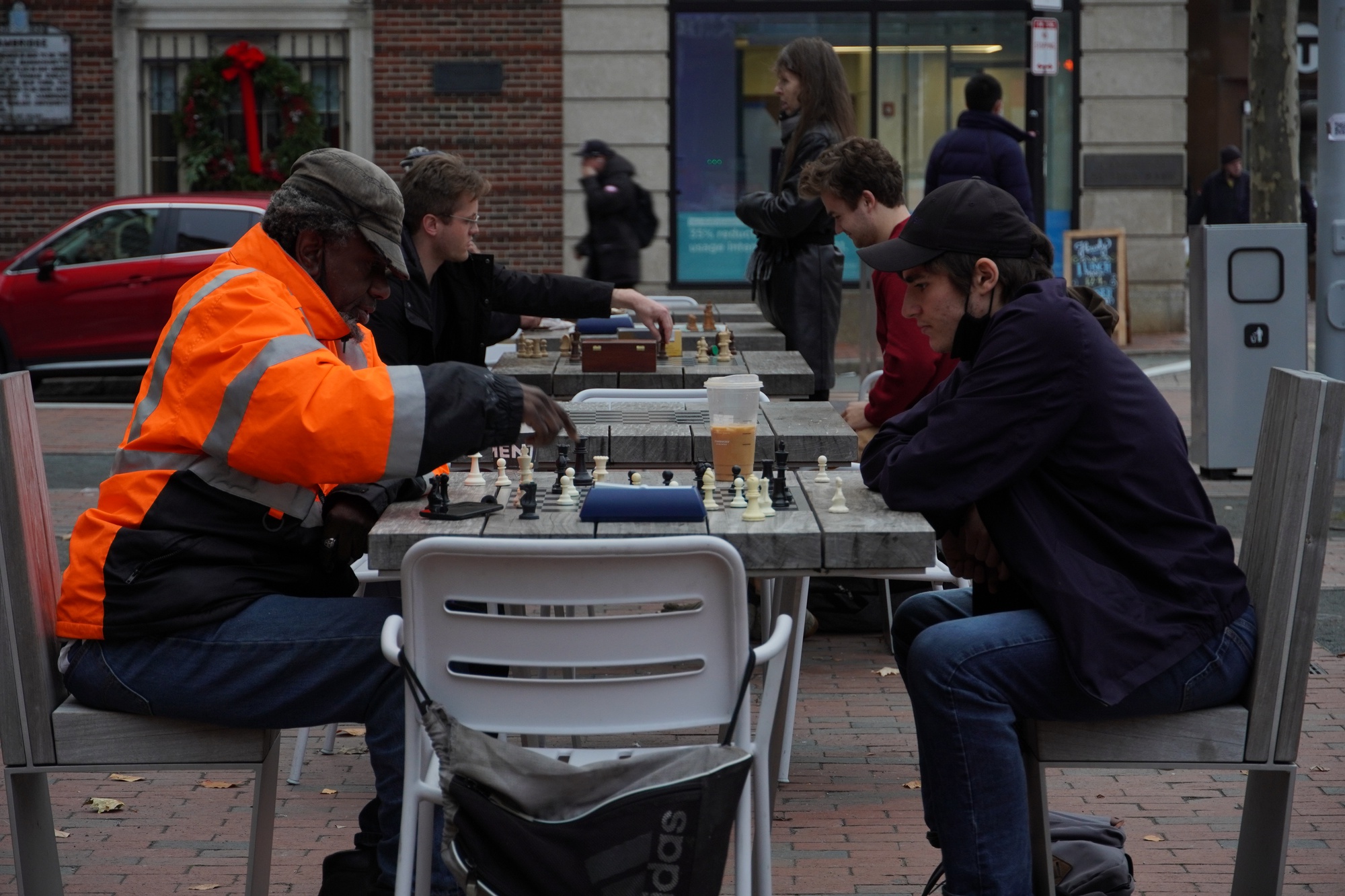 “If you sit down and you’re terrible, no one is going to play with you. If you’re good, then you’re in.”
By Garrett W. O’Brien

In speed chess, whoever controls the clock controls the game. Many games begin with a flurry of moves and rapid tapping of the seesawed chess clock that counts down the five minutes each player has to checkmate their opponent. The defenses and openings found in every chess book are second nature to the group that gathers outside the Smith Campus Center on any given night. Their boisterous laughs, fraternal camaraderie, and brown paper bags contrast what most think of as high-caliber chess that is played in marble rooms in Europe in the movies. The skill level, however, is not too far off.

Edwin G. Ambrose started playing chess outside the Smith Center 38 years ago when the Red Line was extended to connect Harvard Square with Porter and Davis Square in 1984. In the ’80s, Ambrose said that chess in the Square “was kind of cliquey,” and it took some time to gain respect and to become a regular. The process of earning one’s place in these cliques is still alive today. As Ambrose puts it, “if you sit down and you’re terrible, no one is going to play with you. If you’re good, then you’re in.”

The Harvard Square chess scene has been home to novices and masters alike. Current International Master Marc Esserman ’05, who currently holds an astounding 2438 rating (putting him among the top 150 players in the U.S.), spent much of his college years refining his skills on these tables. Today, Ambrose says that ranking doesn’t really play into who matches up with whom; however, players generally know who to target as their competition. Ambrose says that his rating lies around 1900, giving him a Class A ranking and placing him in the 95th percentile of all players nationwide. Despite his impressive credentials, he doesn’t fancy himself as one of the best players who play outside Smith — either a testament to the level of play or Ambrose’s modesty.

The group that plays at the tables is about 40 strong, made up of lawyers, doctors, students, retirees, and even a hustler here and there (I learn this after getting burned a few times myself). The games get going when the sun sets and quickly multiply as players emerge from every direction. When they arrive, there are no ostentatious introductions — simple nods of the head replace overblown greetings. The length of play and size of the group depends on the weather. When it’s nice out, games often continue past midnight.

Ambrose prefers the tables outside of Smith to tournaments for two reasons: “One, you can’t talk and two, it’s not as flashy as what we do out here.” Thirty-eight years later, Ambrose still isn’t bored with the game that he learned from his father when he was five. He comes back almost every night the weather is bearable: “I like the community. I like the foot traffic. I like to play chess, speed chess in particular.”