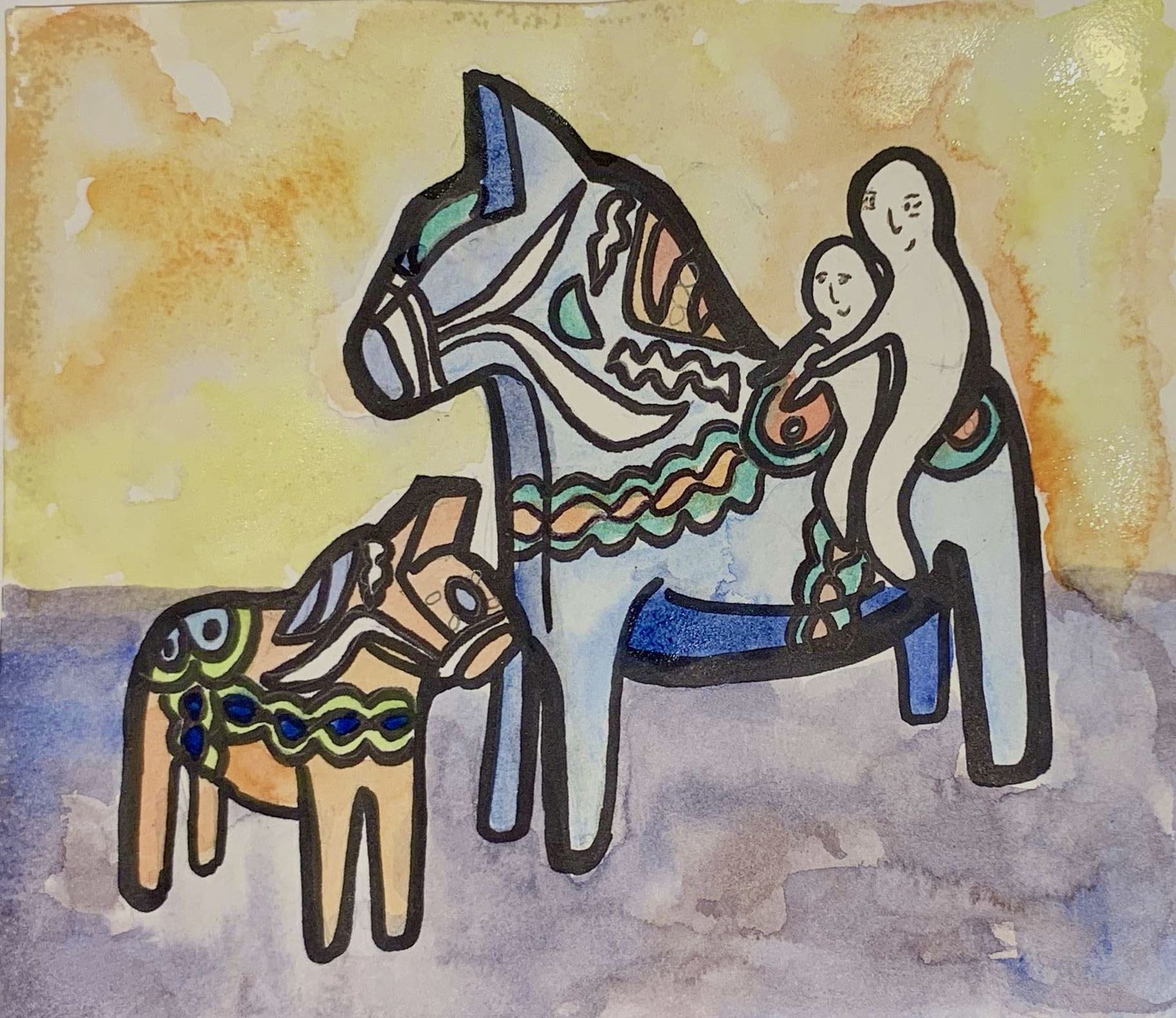 When I was little, I’d hide beneath the wooden coffee table and play with her orange and blue Dala horses, the clacking of their lacquered legs muffled by the cream carpet. By Margot E. Shang
Advertisement
Advertisement

Homecoming: Birgitta, My Mother of Mothers

So I call her double-mother, and for life I owe her twofold, or more. My debt to her is pleated infinitely, like the skirts of the floral chair in her living room. When I was little, I’d hide beneath the wooden coffee table and play with her orange and blue Dala horses, the clacking of their lacquered legs muffled by the cream carpet.
By Roey L. Leonardi

We call my great-grandmother Mormor, Swedish for mother’s mother. It would be more accurate for me to call her my father’s mother’s mother, but Mormor is the name my father called her, the one he passed down to us.

So I call her double-mother, and for life I owe her twofold, or more. My debt to her is pleated infinitely, like the skirts of the floral chair in her living room. When I was little, I’d hide beneath the wooden coffee table and play with her orange and blue Dala horses, the clacking of their lacquered legs muffled by the cream carpet.

Mormor’s name is Birgitta: exalted one. We seat her at the head of the table on Christmas, Thanksgiving, when my grandparents grill hamburgers on a random Tuesday night. She is like a small child, timidly watching as her meal is served first; she is like a bird, the bones of her arms folded like jointed wings. She is our Mother, all of ours, her hair glowing in the halo of battery-powered tea lights.

In 1944, my great-grandfather, Bill Lane, was a navigator for the U.S. Air Force on a bombing raid over Berlin. His plane was one of many: one of many to scorch the earth beneath it and to receive fire in return. But rather than turn back to England as others did, and face long stretches of sea which swallowed greedily and indiscriminately, his crew set course for Sweden.

On neutral soil, the American soldiers were first asked to shed their uniforms. They were then placed in a low-security internment camp in Falun, which just so happened to be the city where Birgitta lived with her four sisters, her brother, and her father. On Saturday nights, the men would sneak out of camp beneath a fence, brush themselves off, and go to dances in Folkets Park. Among those shadowed trees, they wore their plainclothes and twirled Swedish girls and thought of dances back home, of mosquitoes and wilting flowers and high school sweethearts. Certainly not of bombing raids.

One Saturday, Bill danced with Birgitta. Afterward, when he asked to walk her home, she stiffened. Plenty of other nineteen-year-old girls were wooed by foreign soldiers who promised to write and did not. So she gestured to her sister, Dagmar, and shrugged. “You can walk us both home.” And he did.

In his seven months in Sweden, Bill snuck beneath the fence to dances, movies, family dinners. And though she’d been warned to be wary, Birgitta did not doubt him when he talked of life after the war. He promised to send for her, and she knew he would. Perhaps the other American men dreamed of their families at night, their front porch swings, their yipping dogs and white-steepled churches. Bill thought of it all too: home, not as it had been but as it could be, with Birgitta’s blue eyes flashing down on the sidewalks and street corners of his childhood.

He was shipped out before Christmas, leaving Birgitta’s sister with money for a gift. Birgitta still wears that gold ring on her right hand. Two years passed during which they did not see one another. The war ended, and Bill wrote to Birgitta’s father, then her, everything in the proper order. He sent her a ticket to New York on a ship called Drottningholm, first class — a luxury. 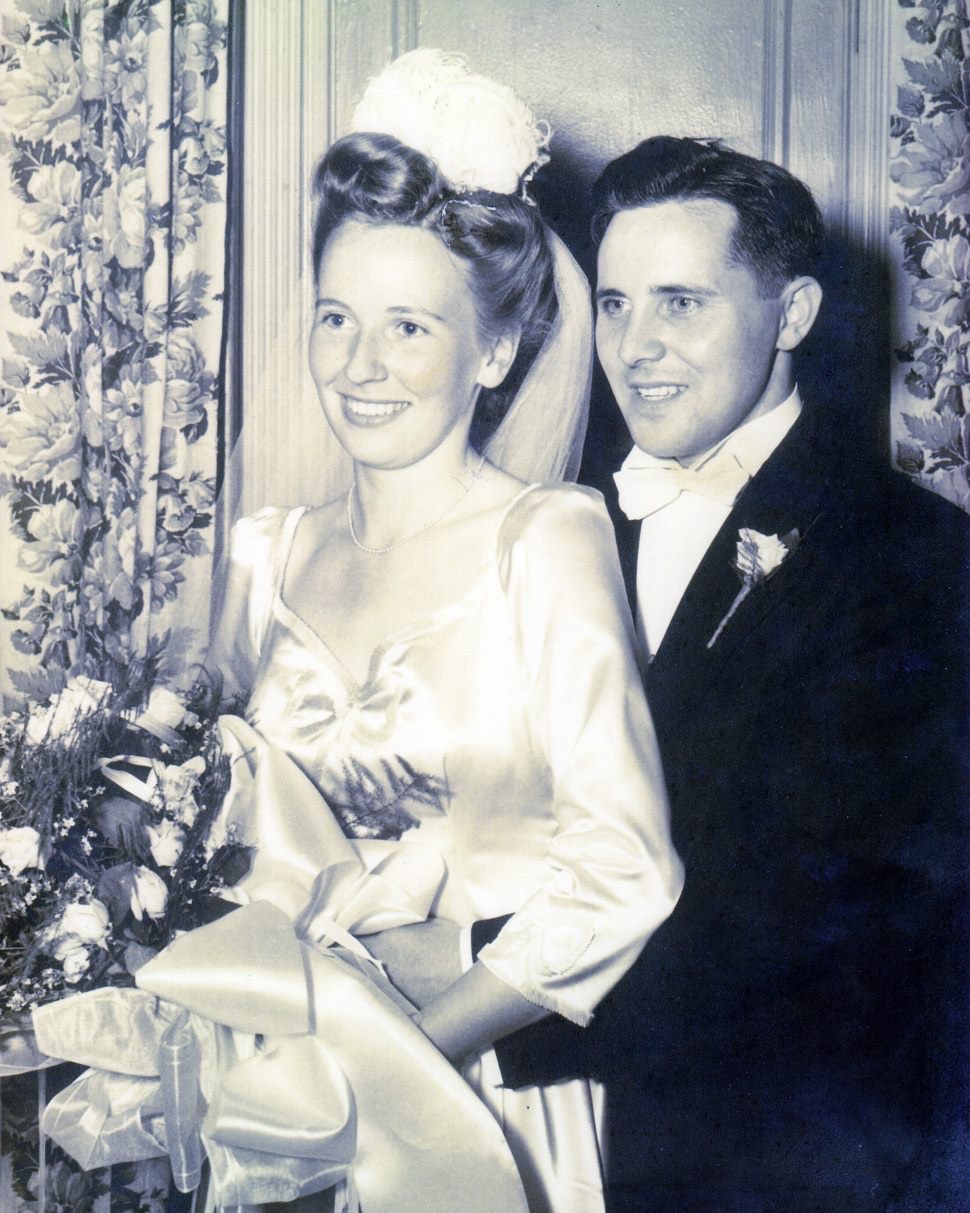 The author's great-grandparents on their wedding day. By Courtesy of Roey L. Leonardi

At port, Birgitta said goodbye to her sisters, not knowing how many years would pass before she’d see them again. She instructed them to stay in the same spot, so she could wave from the ship, but once she boarded they were lost in the crowd. Even now, she remembers her panic. She was 21. She spoke little English. She was suspended above an ocean of black water which gave and took. It took from her childhood and its landscape, and delivered her to Brooklyn, to a ring for her left hand to match the one on her right, to four children who had children of their own, who had children of their own, and so on.

And so I sit at age six on her living room floor and play with her pretty painted horses. I do not know that they come from the province Dalarna, the most picturesque in all of Sweden, where Falun lies. I know my great-grandmother came a long time ago across the sea to marry my great-grandfather. It is the end of a bedtime story, of every princess movie I have seen. I don’t consider how it must have ached. It is inevitable.

At 17, I leave for college and I can feel each bone in her back as she hugs me goodbye. Since my great-grandfather died years ago, she has grown wispy. She does not drive or eat chocolate before bed. She watches Lawrence Welk reruns on PBS and at birthdays she sings in Swedish, and we all mime our way along, laughing with one another.

Her shoulder blades quake and I am shocked at her sorrow. We are strangers in so many ways; the landscape of her childhood is nothing but a postcard to me, and yet it shaped this woman before me. Her courage and her love gave me life, gave me a home in three freckled sisters, saltwater marshes, and my father, her grandson, who married my mother, who wears a little gold Dala horse around her neck. I can see it glinting as I hug Mormor, my mother of mothers, and the longer I hold her, the less bewildered I am by her tears.

I think, This is a woman who knows about leaving-behind. In her mind, I am suspended above a black water ocean. I do not know where I am going, but I know where I come from. I trace back my origin not to my family’s house in South Carolina, not to Brooklyn or to Falun; I come, more than anything, from her.

— Staff writer Roey L. Leonardi can be reached at roey.leonardi@thecrimson.com. This is one of five essays published as part of FM’s 2020 “Homecoming” feature.