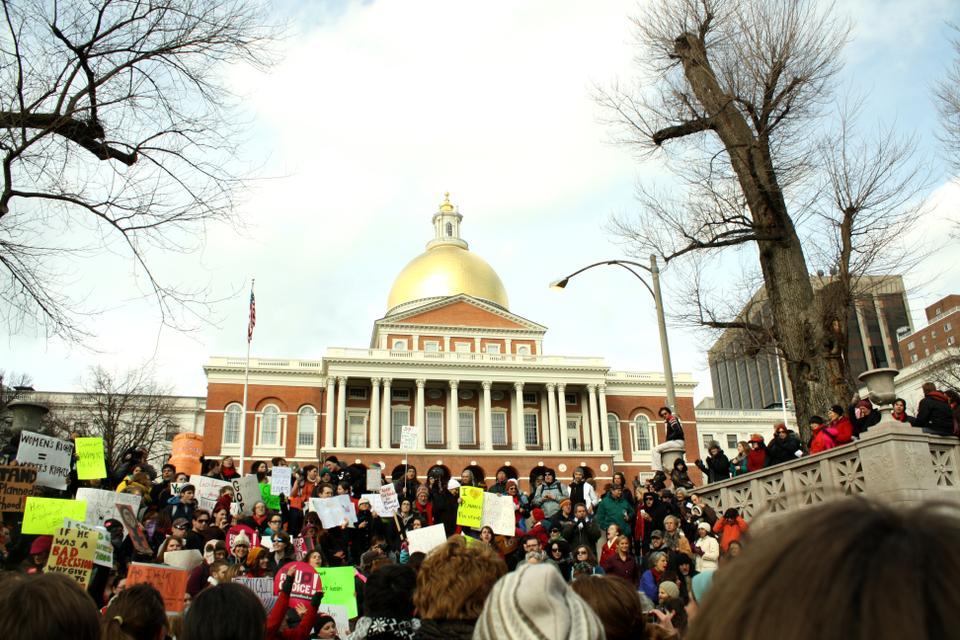 In 2006, members of the Radcliffe Union of Students joined local pro-choice activists in a walk to the Massachusetts State House to rally against Congress' slash of funding for women's health initiatives.
Advertisement
Advertisement

Marching Forward and Looking Back

The recent Women’s March seems to have sparked a greater interest in engaging with feminist issues at Harvard and beyond.
By Norah M. Murphy

In the wake of the election and an increasingly visible feminist presence across the nation, the Radcliffe Union of Students—one of the oldest and biggest feminist groups at Harvard—announced it would be doubling its leadership this year, expanding its board from six to 12 members.

Emma City ’18, a co-president of RUS, says that while many Harvard students identify as feminists, few engage in feminist activism. The recent Women’s March seems to have sparked a greater interest in engaging with feminist issues at Harvard and beyond.

RUS was founded in the 1960s, a decade also marked by activism and political turmoil. Originally, RUS served as a form of student government for Radcliffe College students, and later advocated for the particular interests of female students once the Harvard and Radcliffe student bodies integrated. Five dollars from every undergraduate woman’s term bill helped fund RUS—effectively, all undergraduate women were dues-paying members of the group.

As Radcliffe and Harvard gradually merged during the 1970s, RUS shifted focus, remaining a stronghold of feminist thinking, organizing, and support. A RUS newsletter published in 1978 states that the organization was designed “to promote the interests of undergraduate women in the Harvard community,” with delegates representing Radcliffe students in an elected body.

One of the organization’s priorities in the 1970s was the preservation of the Radcliffe name as the women’s college merged with Harvard.

“To the extent that there still was a Radcliffe identity, it was bound up in RUS,” says Shane Snowdon ’78, whose college experience was largely dedicated to feminist activism. Snowdon was a member of the first class admitted in a gender-blind selection process. “There was a lot of interest in taking on a Harvard identity and shedding the Radcliffe identity, and it seemed like Radcliffe was going to disappear,” she says.

Even though it was no longer a governing body, RUS played an active role in advocating for women’s causes. In a 1976 letter to Radcliffe students, RUS president Barbara Norris ‘77 wrote that “a well-organized committee system has shown to be the most effective way of dealing with the many problems that still exist for undergraduate women at Harvard University.”

The group’s projects during the 1970s included advocacy for a Women’s Center on campus and the development of a Women’s Studies program. Harvard College offered few, if any, courses focused on the experiences of women, leading many female students to seek out Divinity School courses and demand more course offerings.

Sometimes RUS tackled more controversial issues. In 1976, the group gave $1,000 to University Health Services in order to fund emergency abortions for students. That decision was met with mixed reactions from the UHS administration, in part because the abortion fund was drawn from the $5 dues included in every female student’s tuition.

Radcliffe women consistently advocated for women’s rights issues. Students Organized for Security, a group that developed from RUS members, endorsed a Take Back The Night march as early as the late 1970s, and such marches continued—a photo of RUS members in 1991 shows them leading a march with banner in hand and protest signs raised high.

RUS is no longer the student government-advocacy group hybrid of the 1970s, but today is the most generally focused feminist group on campus. While the board of RUS will only expand to fit six more members, City encourages any student interested to come to RUS’ events.

“A lot of people are feeling like...they’ve lost their voices,” said City. The expansion of RUS’s board aims to “give more people the opportunity...to feel like they’re taking a more active role.”