Fifteen Minutes sat down with Emma Donoghue to get to know more about the writer and her new book “The Wonder.”
By Kathleen A. Cronin

Critically acclaimed Irish author Emma Donoghue, best known for the novel and subsequent movie “Room,” spoke at Brattle Theater on Friday night. As fans lined the sidewalk outside, Fifteen Minutes sat down with the writer to get to know more about Donoghue and her new book “The Wonder.”

FM: Is there a common theme that runs through all of your works?

ED: No, no. I mean, there are a few things that show up, you know, like threads in the cloth, I suppose. In the books I’ve published since my kids came along 12 years ago, I’ve written quite a lot about motherhood, but before the kids came along, not at all. A lot of my works have lesbian themes, but not all of my books. I would say gender shows up in all of my books, but they’re not all totally focused on women protagonists. Children show up in a lot of my books. Ireland, history, and I quite often take a historical incident and sort of flesh it out using fiction—again, not always.

FM: What makes “The Wonder” different from your other books?

ED: I’ve never written a full-length historical novel set in Ireland, and I have to say, I so enjoyed this opportunity to get back to my home culture and really delve into its damp roots, you know?

FM: You said in an interview with Scott Simon of NPR that you prefer to set your stories in a myopic or claustrophobic setting. Could you elaborate on that?

ED: Well, the books I enjoy are often written with a huge, kind of epic sweep. I love people like Neal Stephenson, who will be zooming all over Europe, or they’ll be in the near future, and they’ll be describing entire civilizations not yet invented. I love their ambition and their bigness. And yet when I sit down to write, I seem to get very close up and shortsighted and almost slow time down and study it minute by minute... You just need to play to your own strengths as a writer.

FM: How does your LGBTQ+ identity affect your writing, and on the flip side, how do you think your writing affects your relationship with the LGBTQ+ reader?

ED: Oh, interesting. I think it probably helped turn me into a writer... When I was growing up in Dublin, my dad was a professor, and I was good in school, I had no major family problems, I was one of eight children, so it all felt very kind of solid and stable, and there was nothing that made me feel like the other or the outcast or anything. But then at 14, when I realized I was a lesbian, that was the thing for me, that was the little wedge between me and my society, and I think everybody needs a little wedge like that to make them... a slightly more interesting person. But also to make them start questioning things and analyzing things. And it makes them able to empathize with all those who are marginalized or abnormal or outcast. So I’ve written a lot about not just queer people, broadly defined, but I’ve written a lot about freaks and slaves and just anyone who’s far on the outside. So I think it was hugely beneficial; it really woke me up.

As to how it affects my relationship with our community… When I began, I would have expected that community to kind of want to keep me on a leash as a writer, because, as a lesbian reader in the 1980s, I was desperate for positive role models. So again, I would have expected that community to try and restrict what I wrote, but they never have, you know? I have some readers who come up to me and say, “I hope maybe you’ll do more books with lesbian themes,” so they clearly like some of my books more than others, but they are just hugely appreciative of writers having the freedom to write whatever they like. They’re so grateful if you’re not in the closet, basically. They don’t then try to limit what you write about. So I feel very supported by that community. 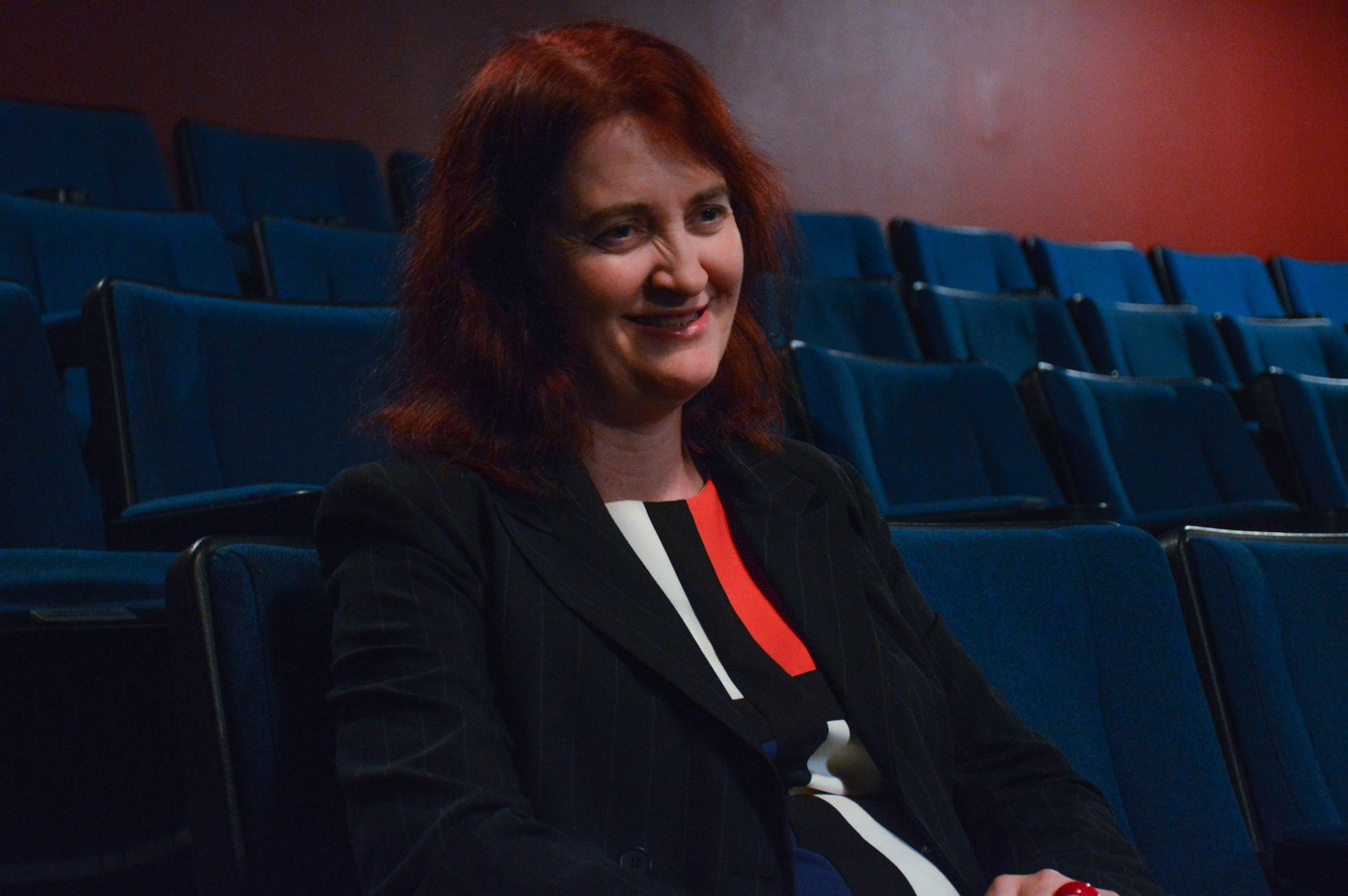 Critically acclaimed Irish author Emma Donoghue in conversation with Fifteen Minutes at Brattle Theater Friday. The Mount Merrion, Dublin native, who is best known for her book and subsequent film "Room", was in Cambridge to promote her latest novel "The Wonder". By Megan M. Ross

FM: The little girl in “The Wonder” is thought to be kept alive by a miracle. Do you personally believe in miracles?

ED: No, I’m pretty rational. But on the other hand, I’m fascinated by people who are not rational. I suppose it’s because, when I’m writing my books, I’m drawn to the kind of extreme characters who I probably wouldn’t seek out in my everyday life. The visionaries, the zealots, the obsessives. They just make for very strong story lines, you know? So in this case, I was fascinated by the idea of a girl who’s perfectly intelligent, but she’s been raised in a very fundamentalist religion, and she has absorbed those rules, and she’s taken them to an extreme. So I suppose one thing I was trying to do in the book was to look at whether the most ordinary human emotions—like the wish to protect a child—can take on some of the power of the miraculous, without ever writing a story that is supernatural.

FM: What is one thing you would want a reader to know before diving into “The Wonder”?

ED: Nothing at all. Nothing at all. I’d love to rip the cover off, remove the title, and just press it into somebody’s hands and say, “Read this.” I mean, that’s the irony, that we write our books on the assumption that the reader will know nothing, and we carefully think about exactly when you learn each bit of information. Even the main character’s name—we carefully drop that in. And then we’re obliged to sell our books by putting about half the plot on the book jacket, you know? Paradoxically, we would all prefer the reader to know nothing at all.

FM: In an interview with The Atlantic, you noted Emily Dickinson, more specifically “Wild Nights!— Wild Nights!,” as having great influence on you as a young woman. Why do you think this specific work spoke to you?

ED: Well, I’m trying to remember why that particular one. I mean, I know my mother used to read me or recite to me Emily Dickinson poems when I was really young, so she’s probably the first poet that I became close to. But also, Emily Dickinson’s own story is so odd, and her poetry is so odd. When you put the two together, it’s one of these incredibly distinctive literary characters. And it’s funny, even though I’ve ended up the kind of writer who really [sees writing] as a job, and every book I’ve written has been published... I’m fascinated by Emily Dickinson, who was the opposite. Who wrote so much for herself. And who, when she didn’t get a poem published, just withdrew from the world and didn’t try to publish them at all. So she’s a very mystical kind of writer, where as I’m a very just getting-on-with-it kind of writer. And yet she just absolutely fascinates me, for all of the rich ambiguity she managed to put into her fairly simple seeming lyrics.