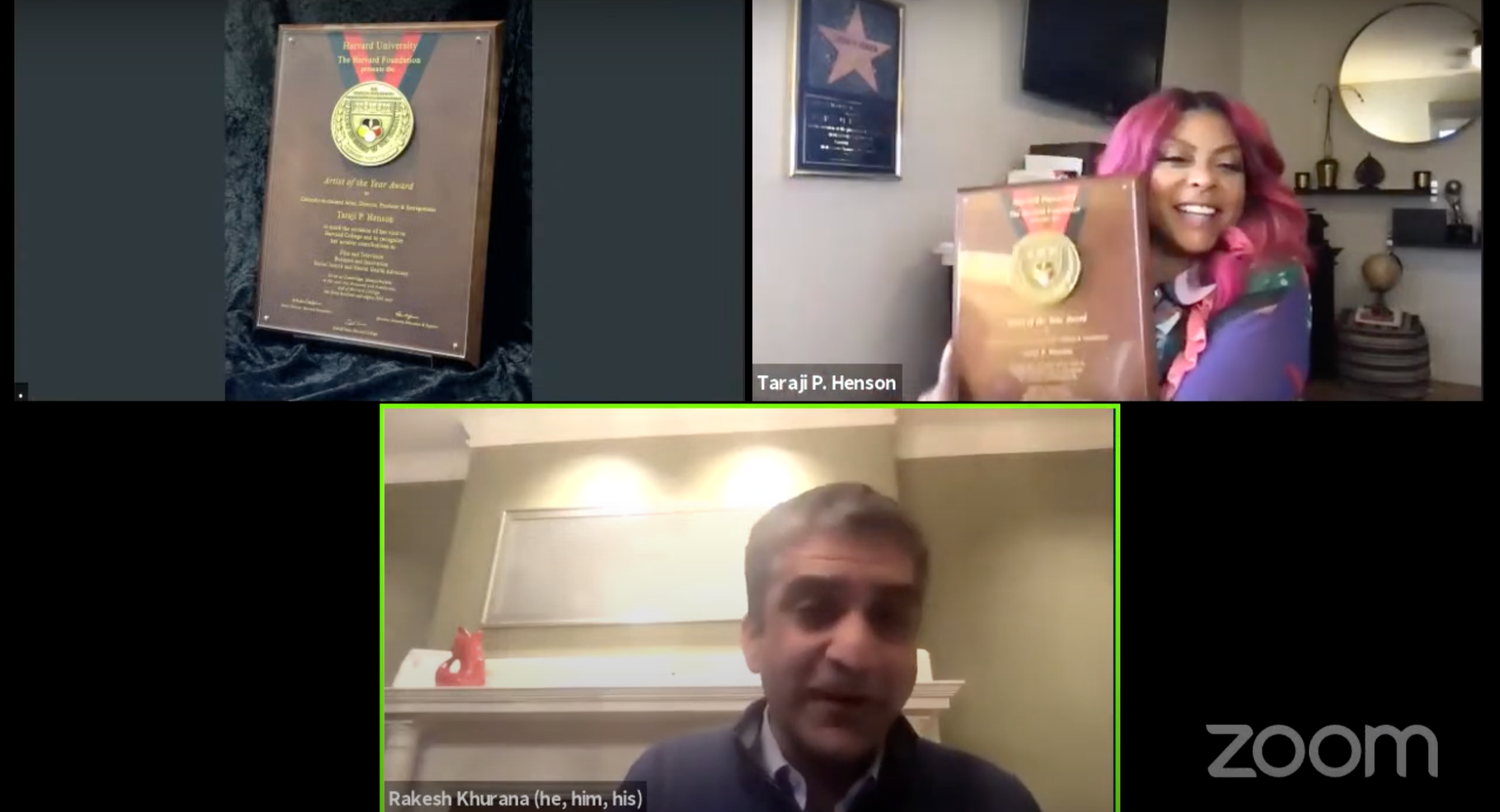 Dean of the College Rakesh Khurana virtually presented actress, director, and producer Taraji P. Henson with the Harvard Foundation's Artist of the Year award at an event April 1. By Leah J. Teichholtz
By Audrey M. Apollon and Leah J. Teichholtz

The Harvard Foundation for Intercultural and Race Relations awarded actress, director, and producer Taraji P. Henson its Artist of the Year award at its annual Cultural Rhythms event earlier this month.

The ceremony, which took place on April 1, concluded the 35th installment of Cultural Rhythms, an event the Foundation holds annually to showcase and celebrate cultural and ethnic diversity at the College. The show features student performances and a celebration of the Artist of the Year. Past honorees include Shakira and Denzel H. Washington.

During the ceremony, Robin M. Johnson, director of the Harvard Foundation’s Office of Diversity Education and Support, said the Foundation honored Henson for her contributions to both the entertainment industry and public conversations around race and mental health.

“You have inspired us to break the silence, to quiet the inner critic, to resist the doubters and detractors, to speak our truth, to be our authentic selves, to find healing and hope, and to spark, cultivate, and fully experience joy in our lives,” Johnson told Henson.

Henson, who has starred in the Oscar-nominated film “Hidden Figures” and the television show “Empire,” said at the event she believes it is important to support other women, even in the competitive entertainment industry.

“I don’t compete with women. I compete with myself,” Henson said. “Women are my allies, and I wish that we could all get to this place.”

Derrick T. Ochiagha ’22, a student leader of the event along with Mariana Haro ’23, said another reason the Foundation honored Henson as Artist of the Year was for her work in empowering Black voices, especially those of Black women.

“She’s really helped carve out a new kind of role for Black women in television, and I think that’s something that really spoke to us,” he said.

Dean of the College Rakesh Khurana called Henson an “inspiration” and virtually presented her with the award, which she held up to her camera for the Zoom audience of roughly 200.

In a typical year, Cultural Rhythms is held in Sanders Theatre. Harvard Foundation senior director Sheehan D. Scarborough ’07 wrote in an email that the challenges of Covid-19 — in addition to ongoing racism and xenophobia — made the Foundation “completely rethink” its approach to the show this year.

“Every year, we witness the tremendous talent that is alive in our community, but Cultural Rhythms is about so much more than talent,” he wrote. “In the face of challenges generations in the making, these performances are acts of cultural preservation, of self-preservation, and of resistance.”

The event also featured student performers, including the Kuumba Singers of Harvard College and Remka Y. Nwana ’23, who delivered her spoken word poem “I Know Who You Are.”

In an interview after the event, Nwana said she decided to perform because she is passionate about uplifting marginalized voices.

“My whole goal in life is to speak out for the voices that have been silenced and unheard,” Nwana said. “The theme of Cultural Rhythms this year, which was about fighting injustice and stereotypes — I felt it was centered around the stuff I like to go after in my poems.”