Get H-Ype About the CEB’s Harvard-Yale Spirit Week 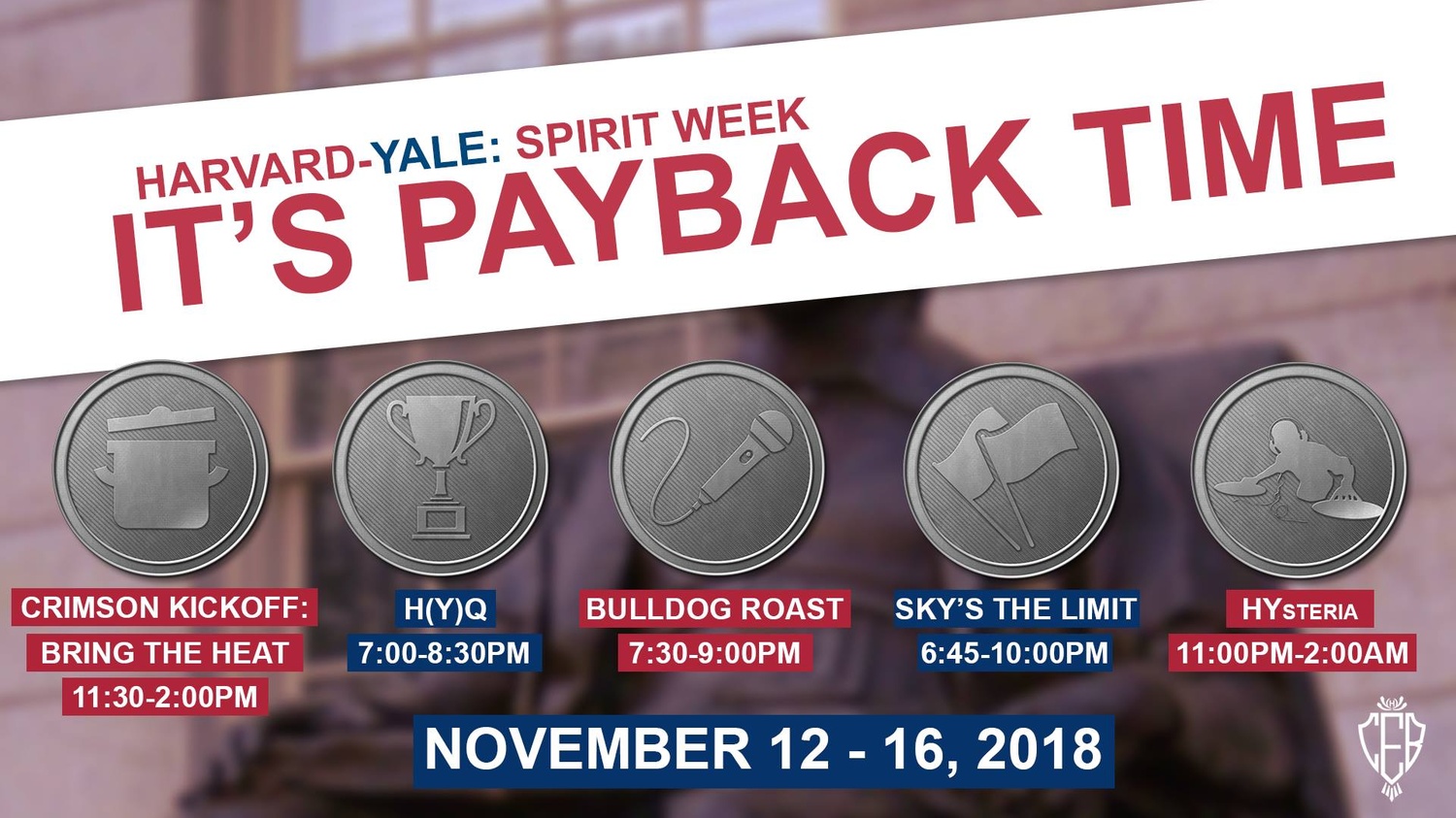 By Courtesy of College Events Board

In case you didn’t know, there’s a football game this Saturday against some random school. For real, though, get hype for The Game because It’s Payback Time! Check out the Harvard-Yale spirit week events the College Events Board has planned for us — spoiler, so many chances to win free stuff.

HUDS needs your help in choosing its new dhall chili recipe! The tasting will be located in the Science Center Plaza between 11:30 a.m. and 2 p.m. where you can vote on your favorite recipe. You can even submit your own family recipe and oversee its preparation in Annenberg if it’s selected! Don’t miss your chance to pick up your CEB spirit week punch card — which lets you rack up premium swag if you attend multiple events — and see the Dance Team perform.

Bring that big Harvard brain of yours to Emerson 105 at 7 p.m. and join fellow students in a HQ-style game show for the ages. Top performers from the first round of competition will have a chance to compete on stage, and the grand champion will win both an individual prize and a prize for his or her House! Houses with the highest attendance and best spirit will also receive prizes, including a photo booth for formal, a PlayStation, and a Lizzy’s Ice Cream & Doc Popcorn study break.

This event is titled “Bulldog Roast,” and thankfully, the roasting is just verbal. Located in the Smith Campus Center’s Harvard Commons at 7:30 p.m., comedy groups on campus such as On Harvard Time and the Harvard Stand-up Comic Society will be competing for the best verbal beating of Yale. And don’t forget about OEB Professor Andrew Berry’s iconic “Why Harvard is Better than Yale” lecture. As if these events weren’t enough to convince you to attend, there will also be free food!

Thursday - Jump on It

We don’t know about you, but The Game’s got us jumping with excitement. Sign up for a free trip to Sky Zone Trampoline Park and show off those trampoline dodgeball skills of yours. You’ll be notified if you’ve received a spot by lottery — and then you can bounce the night away. Snacks and Harvard-Yale t-shirts will also be provided! Oh, how we love freebies.

Yes, The Game’s been around for that long. In an epic ending to spirit week, the official Harvard-Yale party will be hosted in Annenberg Hall from 11 p.m. to 1:30 a.m. With DJ MATIC repping Harvard and Boola Juice bringing the beats for Yale, it’s bound to be a spirit-filled time. There’s free admission with a valid Harvard or Yale ID, so head over if you like fraternizing with the enemy...

Clear your calendars and join CEB for this fun week of camaraderie, prizes, and spirit. This is your chance to make this Game the best one yet!