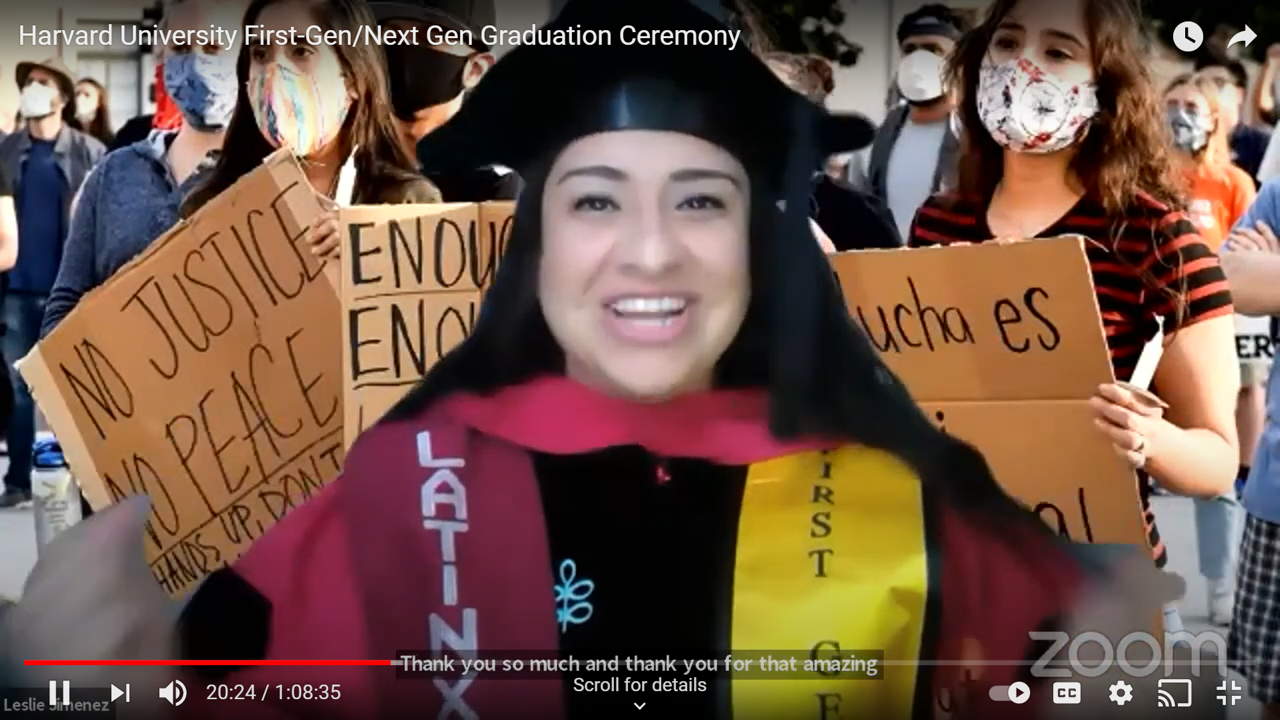 Leslie Jimenez, a doctoral graduate from the Harvard Graduate School of Education who works on the NextGen Leadership Team, spoke about her experience as a first-generation student during Harvard's inaugural First Gen/Next Gen Graduation Ceremony on May 23. By Leah J. Teichholtz
By Leah J. Teichholtz, Crimson Staff Writer

Harvard held its inaugural First-Gen/Next Gen Graduation Ceremony on May 23, a special commencement celebration honoring the achievements of graduating students across the University who are first generation, low income, undocumented, DACA or TPS recipients, or mixed-status.

Attended by more than 100 graduating students, the ceremony was jointly hosted by the Office for Diversity, Inclusion and Belonging and the Next Gen Initiative, which aims to improve existing resources for FGLI students across Harvard’s 12 schools.

Amanda K. Sharick, project lead for the Next-Gen Initiative, said that while students value Harvard’s general commencement, there is “something more” to a commencement celebration around the shared identity of being FGLI.

“It’s the most beautiful thing to be affirmed by someone who understands,” Sharick said. “That’s the reason why a separate space is needed — to affirm, to acknowledge, and to celebrate in community.”

Sherri A. Charleston — the University’s first Chief Diversity and Inclusion Officer — offered a welcome address to the virtual crowd, in which she called on students to continue to be leaders once they graduate from Harvard.

“Remember what you chose to do here leaves with you and it goes beyond this great institution into the world,” Charleston said. “And it will ripple backwards throughout future generations of Harvard students.”

Physics and Chemical Engineering professor Vinothan N. Manoharan, faculty advisor for the Next Gen Initiative, congratulated graduating students and said they represent the “next generation” of scholars, organizers, and inventors.

Several FGLI graduating students across various schools of the University also spoke about their experiences during the ceremony.

Nathan J. Nakatsuka ’12, an M.D.-Ph.D. student at Harvard Medical School, said what he has appreciated most about studying at Harvard over the past 12 years is the “incredible diversity” of University affiliates.

Emily Romero Gonzalez ’21 — a former co-director of the student-run immigration advocacy group Act on a Dream — said although she has faced a number of obstacles during her time in the College as a FGLI student and DACA recipient, she is “filled with pride” in these communities at Harvard.

“Harvard was never built for students like us,” Gonzalez said. “Throughout my four years here, I grappled with the reality of Harvard’s exclusionary history and the lack of resources for my many communities. But despite this, we have never failed to advocate for what we deserve, even during the hardest of times.”

Graduate School of Design graduate Charmie Kapoor said in an interview following the event that the ceremony felt like a “haven” for FGLI students to share personal stories about their experiences at Harvard.