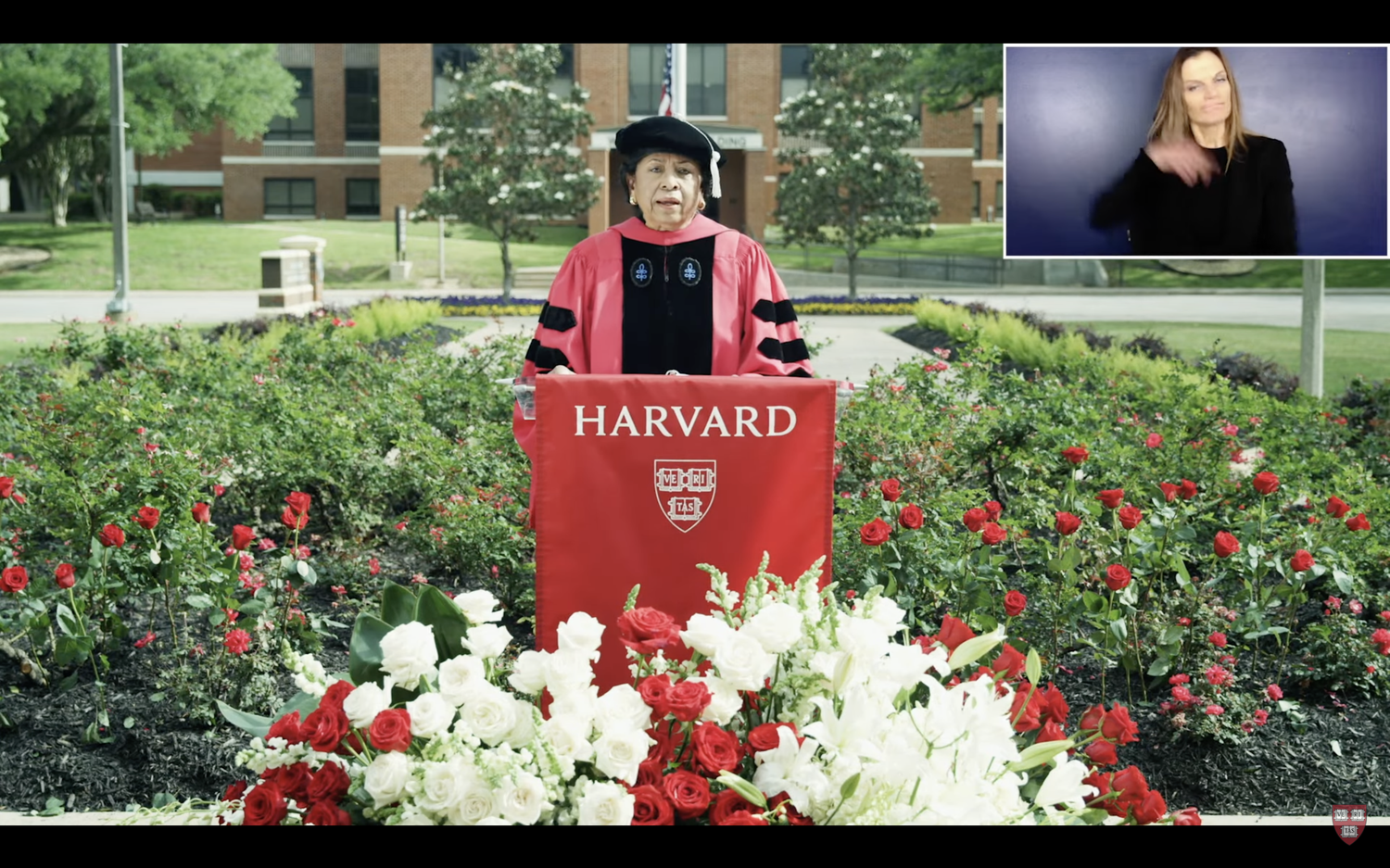 In the ceremony’s principal address, Ruth J. Simmons, the president of Prairie View A&M University, drew on the story of her segregated upbringing in Houston and called on Harvard and its graduates “to be a force for inclusion.”
By Jasper G. Goodman and Kelsey J. Griffin, Crimson Staff Writers

Harvard awarded 2,440 degrees across the Faculty of Arts and Sciences at its second consecutive virtual Commencement ceremony Thursday, including 1,292 degrees to the College’s Class of 2021.

A sunny Tercentenary Theatre, where Commencement is normally held, sat empty Thursday. The University elected to postpone its in-person graduation in favor of an online ceremony due to Covid-19, even as other area schools have held socially distanced ceremonies in recent weeks.

University President Lawrence S. Bacow opened the ceremony with recorded remarks from his office in Massachusetts Hall, noting that “this is where I used to come to work.”

“I haven’t done that for 440 days and counting — but who’s counting?” Bacow joked.

Harvard's ceremony honoring the Class of 2021.

In the ceremony’s principal address, Ruth J. Simmons, the president of Prairie View A&M University, drew on the story of her segregated upbringing in Houston and called on Harvard and its graduates “to be a force for inclusion.”

“I call on all of you to declare that you will not give sanction to discriminatory actions that hold some groups back to the advantage of others,” Simmons told graduates. “I call on you to be a force for inclusion by not choosing enclaves of wealth, privilege, and tribalism such that you abandon the lessons you learned from your Harvard experience of diversity. ”

Simmons received a Ph.D. from Harvard in Romance Languages and Literatures in 1973 and went on to serve as the president of both Brown University and Smith College, in addition to Prairie View. At Brown, she became the first Black president of an Ivy League institution.

Towards the end of her speech, Simmons asked graduates what they “are prepared to do to acknowledge and address the historic biases and inequities that so many continue to experience.”

“Will your actions point us in a more uplifting direction?” She said. “For, just as we recount the moral bankruptcy of those who cruelly enslaved others, we also tell the story of those who were equally guilty because they refused to challenge the practice of slavery.”

“Just as I ask Harvard to use its voice on behalf of minority institutions that have been unfairly treated across time, I ask you to add your voice to the cause of justice wherever you go,” she concluded.

She reflected on feeling like an outsider during her time at Harvard, envious of peers who could see themselves in the University’s history and traditions.

“Few things that I could see at Harvard at the time represented me,” she said. “Perhaps it is the memory of that feeling that moved me to remain in university life to make that experience easier for others who felt excluded.”

“The need to make universities more aware of how first generation and underserved communities reacted to the stultified tradition in many universities shaped my conviction about the importance of individuals feeling fully embraced and respected as learners, erasing vestiges of disparagement that inevitably accrue in an unequal society,” Simmons added.

In her address, she called on universities like Harvard “to acknowledge the limitations imposed” on historically Black colleges and universities like Prairie View “by the legacy of underfunding and isolation from the mainstream of higher education.”

“While universities like Harvard had the wind at their back, flourishing from endowments, strong enrollments, constant curricular expansion, massive infrastructure improvements, and significant endowment growth, HBCUs often had gale force winds impeding their development,” she said.

Gómez shared an anecdote from her first day of kindergarten, when she clung to her mother’s leg for fear of having to “confront this new world” all by herself.

She said the Class of 2021 now bears the responsibility of creating a new normal after the Covid-19 pandemic and of enacting change to combat racism, xenophobia, and classism.

Gómez charged graduates to work to dismantle oppression, pointing to police brutality, unequal access to healthcare, and violence against Asian-Americans as notable challenges of their generation.

“The generations to come are looking up to us as we put out fires and lay the foundation of a world that they will be proud to be a part of,” she said.

In the face of this “large and crucial task,” Gómez acknowledged graduates may want to cling to the familiarity and comfort of Harvard, just as she held onto her mother years ago.

She urged her peers to recall her mother’s advice that “no matter how scared you are in the moment, you overcome your fears and you keep pushing.”

In a speech entitled “Four Lone Names,” Bish reflected on how the Class of 2021 can fulfill the legacies of their ancestors, and how he can honor the four enslaved individuals who lived at Harvard.

“I imagine they say to us that we, the living, stand under a unique duty to the deceased,” he said.

Citing Harvard’s history as the place where the idea of “intersectionality” arose and the home of the country’s first school of public health, Bish called on graduates to use their intellect to “forgo the spirit of disempowerment” and work to achieve greater fairness.

“The work we have to do — in this decade — is too precious for your timidity,” he said. “The mountains we have to climb are too steep for soft shoes.”

Vish called on the Class of 2021 to live lives worthy of the service of the four enslaved at Harvard — named Bilhah, Venus, Titus, and Juba — and to be not only “the bearers of great privilege, but the breakers of powerful yokes as well.”

Singer and bass player Devon N. Gates ’23, a dual degree candidate at the College and the Berklee College of Music, performed the song “Stand By Me” from a recording in Sanders Theatre. The ceremony closed with a virtual rendition of the song “Fair Harvard” by the Harvard Choruses and the Harvard Band.

Harvard has pledged to eventually hold in-person Commencement ceremonies for the Class of 2020 and the Class of 2021, both of which celebrated graduation online due to the pandemic.

“One day, you will celebrate your graduation on campus with classmates and friends in familiar places — and that day cannot come soon enough,” Bacow said during his welcoming remarks. “For now, delight in the company of those who have cheered you on and cheered you up.”