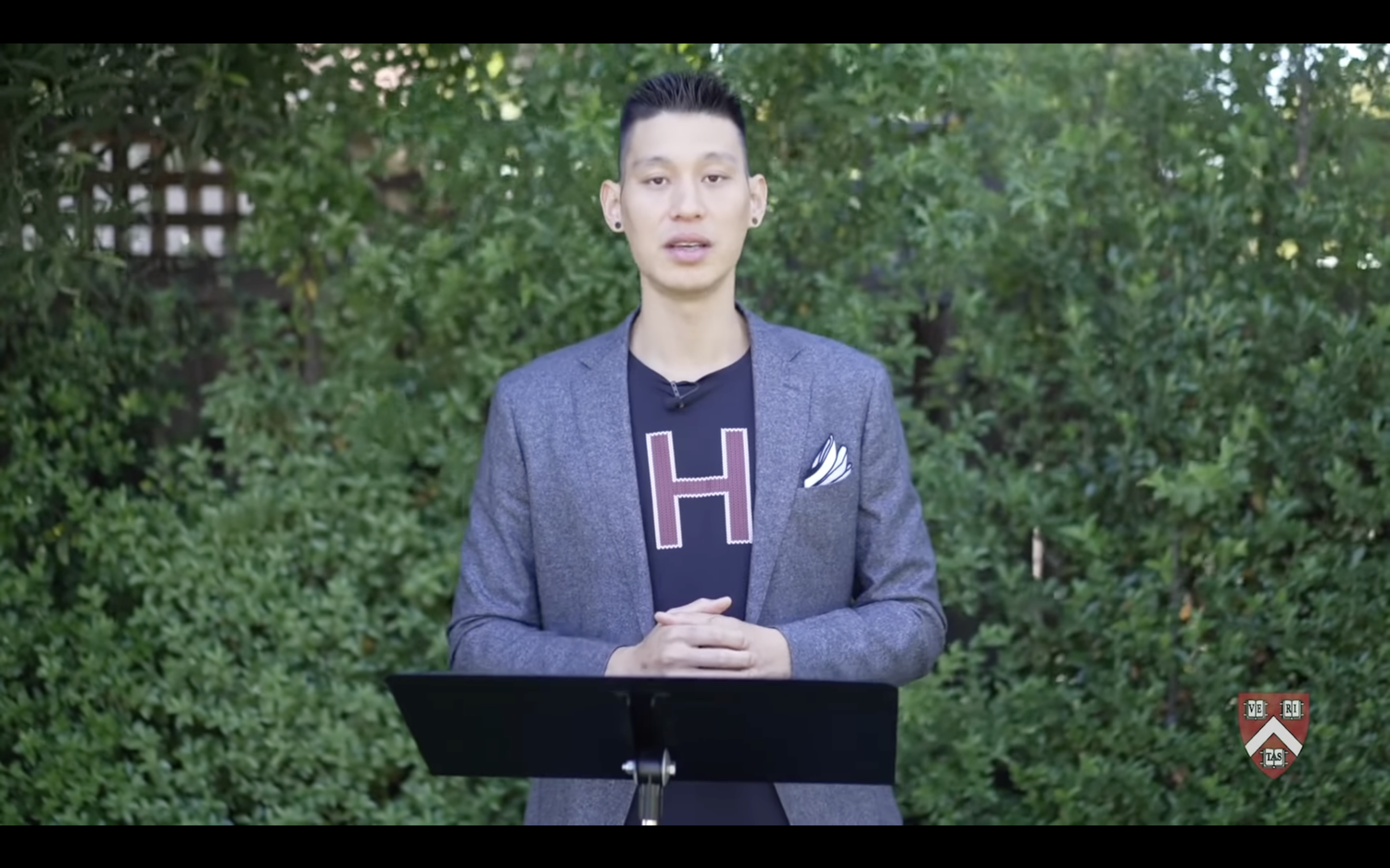 ‘When I was first asked to speak at Class Day, in true student-athlete fashion, I tried to turn down this extra writing assignment,’ Jeremy Lin ’10 quipped in his Class Day address Wednesday.
By Alex Koller and Taylor C. Peterman, Crimson Staff Writers

Professional basketball player Jeremy Lin ’10 encouraged the graduating Class of 2021 to seek community and embrace their identities in the pursuit of success during Harvard College’s virtual Class Day Wednesday.

Lin is known for being the first American of Chinese or Taiwanese descent to play in the NBA and the first Asian American to win an NBA championship. He shot to global fame in 2012 when he led the New York Knicks in a winning run known as “Linsanity.”

Harvard announced in February it would postpone Commencement Exercises and hold virtual ceremonies for the second consecutive year due to the Covid-19 pandemic.

“When I was first asked to speak at Class Day, in true student-athlete fashion, I tried to turn down this extra writing assignment,” Lin said in his address. “But I get it. In a year all about diversity and inclusion, you needed a token. So here I am, your token Asi—athlete.”

At one point, the camera shifted to reveal Lin wearing shorts — casual attire he quipped as another example of him “breaking barriers.”

Lin also reflected on what his Harvard degree has meant to him as a professional athlete.

“I want to say that having a degree from Harvard has done absolutely nothing for me. Seriously, it hasn’t helped me at all in my chosen profession,” he said. “If anything, it was just a quick, easy way to spend $200,000 and feel superior to Cornell grads.”

“Still, I’m really glad I have it, and I’m really proud to be a part of this community,” he added.

Lin said his reputation as “the Asian basketball player” when he first gained notoriety puzzled him, but that he eventually came to realize his heritage as a strength, not a weakness.

“I’ve come to understand that my identity is part of my superpower,” he said. “Even though I will always be more than an Asian American basketball player, just as each of you are more than your backgrounds, who I am and where I come from is woven into everything that I do. That’s the cold, hard Veritas.”

Lin implored the Class of 2021 in his speech to not undervalue the importance of community when achieving success.

“I hope that you will take your identity and whatever background and life experiences you have to help change the lives of those around you,” he said. “Because after being at the top of the world during Linsanity, I can tell you that success without community is absolutely meaningless.”

Khurana lauded seniors for their resilience in the face of immense uncertainty this past year.

Incoming Harvard Alumni Association President Vanessa W. Liu ’96 welcomed seniors to the HAA, and Olivia S. Farrar ’21 delivered the Harvard Oration, analyzing the Class of 2021’s journey through the lens of Edgar Allan Poe’s theories about what makes a “great story.” She argued against Poe’s belief that an author should only begin writing a story once they know its ending.

“I don’t think a good author has to know the ending before they start writing. None of us could have predicted the pandemic. But I think very few of us could have predicted the people we would be today — pandemic or no pandemic,” she said. “That’s how true writing and living goes. It’s setting forward, stepping out of your door or into an unknown cadence of words and sentences, and hoping that your feet and your fingers find the way.”

“And if the degree we are each being awarded shows anything, it’s this — we did find our way,” she added.

Marie A. Konopacki ’21 delivered the Ivy Oration, joking about the day Harvard sent students home due to the pandemic, the trials and tribulations of Zoom classes, and the mystery identity of last year’s planned Yardfest headliner.

“We remember March 10, 2020 — the day Harvard told us they were sending us home — like it was yesterday,” she said. “Well, actually, some of us only remember that morning.”

“I will miss some parts of this odd digital education we got. My typing speed has never been faster and my eyesight has never been worse,” Konopacki said. “Breakout rooms put me face-to-face with incredible people I never would have met.”