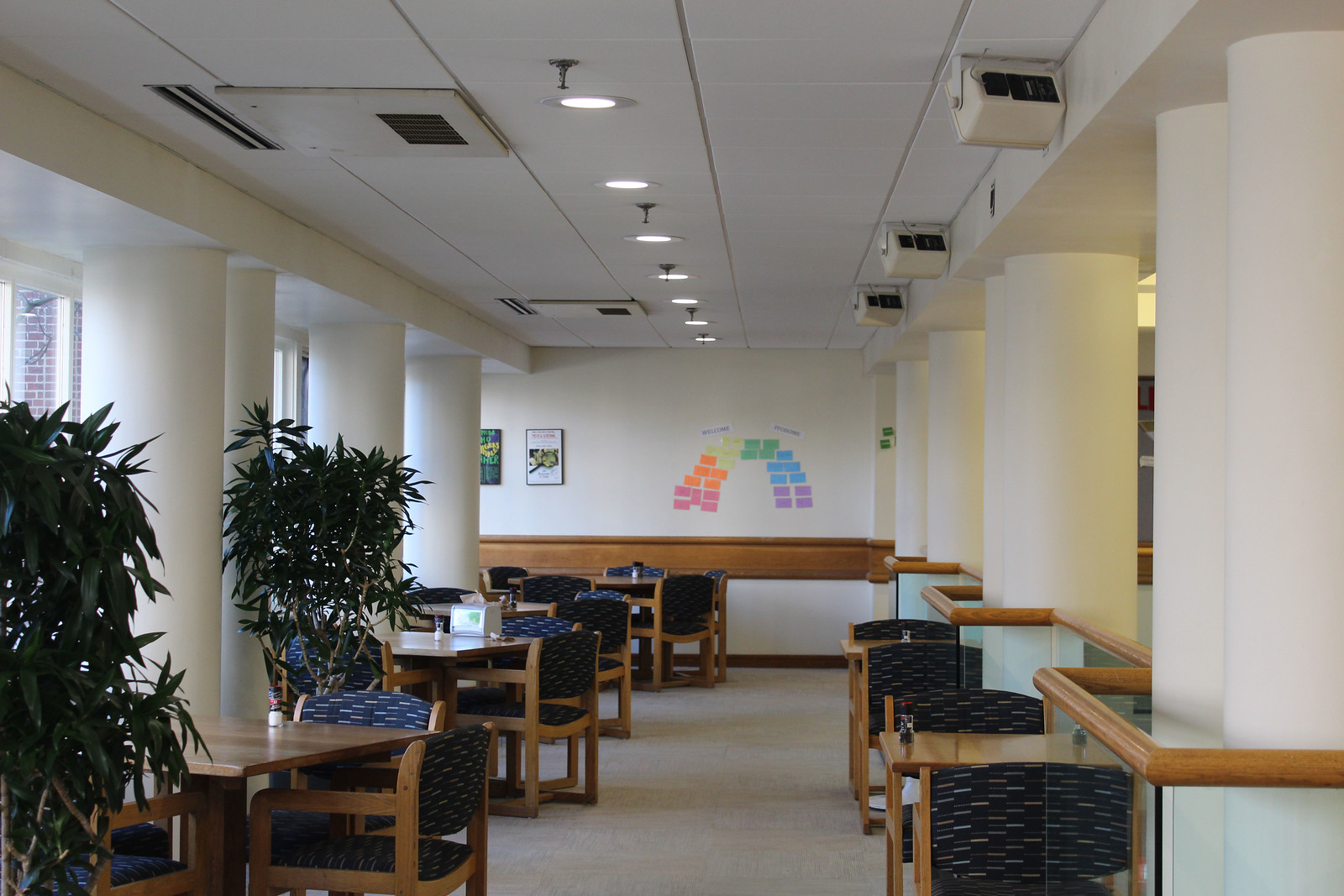 By Mirac M. Suzgun
There are two kinds of people walking around on campus: those who live in Pforzheimer House, and those oblivious to how great it is.
By Lucy Liu

There are two kinds of people walking around on campus: those who live in Pforzheimer House, and those oblivious to how great it is. Pfhomies spend their three years as upperclassmen basking in a paradise of singles, “pf” puns, and enviable amenities (namely, a guinea pig room and a spfa). Home is where the heart is, and if your heart is drawn to things like dog-sledding trips and Adams dhall swipe, you should start hoping for Pfoho. 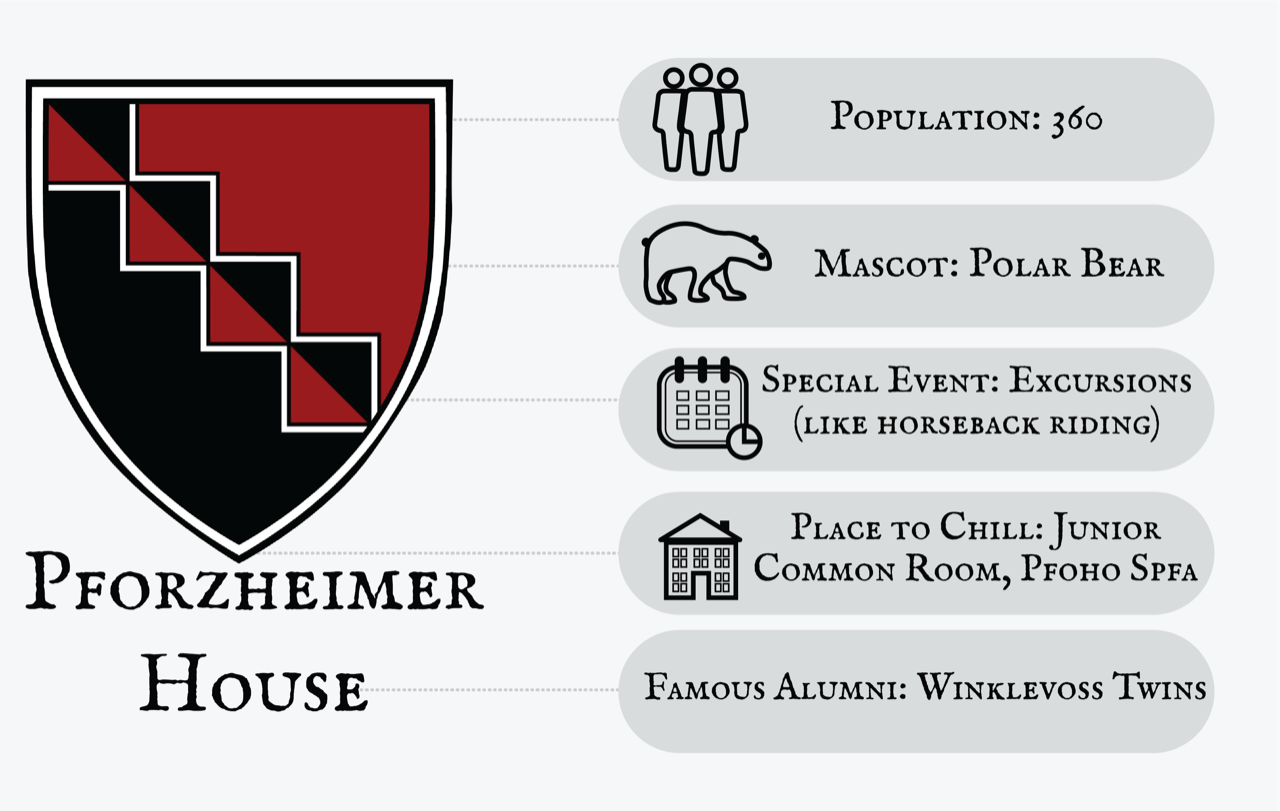 The expansiveness of the Quad translates to luxurious housing options for its students. “We basically guarantee people singles sophomore year,” says Francisco “Frankie” Matos ’20, House Committee co-chair. “90 percent of people in Pfoho will get at least n housing sophomore year, if not n + 1. Other houses can’t guarantee that, even for juniors.” 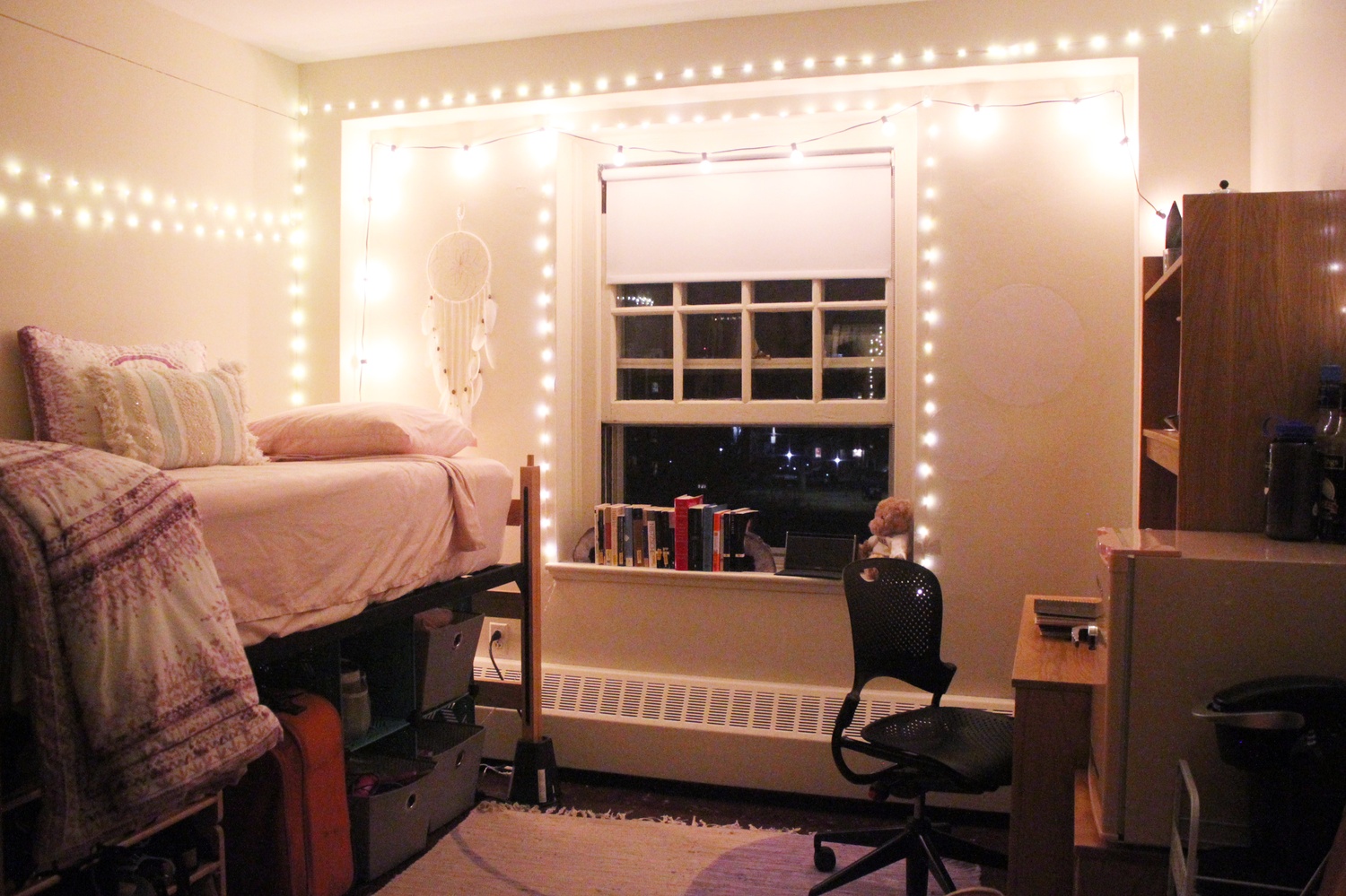 Pfoho sophomores enter a lottery for housing preferences once they join the house, then rank the rooms they are interested in after receiving their lottery numbers. Besides hallway singles and typical suites (with singles!), sophomores are eligible for some fancier n+1 housing options, too, like rooms in the Jordans and duplexes — two-floor suites with ensuite bathrooms — for the luckiest blocking groups. The Jordans are a minute away from Pfoho’s main complex and offer spacious common rooms and kitchens.

Besides student rooms, Pforzheimer is full of other spaces to relax in. A Spfa in Holmes Hall boasts massage chairs, sunlight machines, and candles. Residents who miss their pets can visit Pfiona, Pfoebe, Piper, Penny, Maizy, Mochi, and Alpfalpfa, Pfoho’s guinea pigs, in the Holmes playroom. And when inspiration strikes, head to Pfoho’s art studio. Other spots to hang out include the Quad Grille, Junior Common Room, and dhall.

The dhall is where Pfoho’s warm and welcoming community really shines through. Students gather to eat, socialize, work, and procrastinate together at all hours of the day. “You know everyone in the dhall, everyone talks, they’re friendly, they say hi. Or everybody’s working together,” says Cade Palmer ’20, House Committee co-chair and former Crimson Sports Chair. Pforzheimer’s dhall has a unique two-story layout with long tables on the first floor and smaller ones on the second. 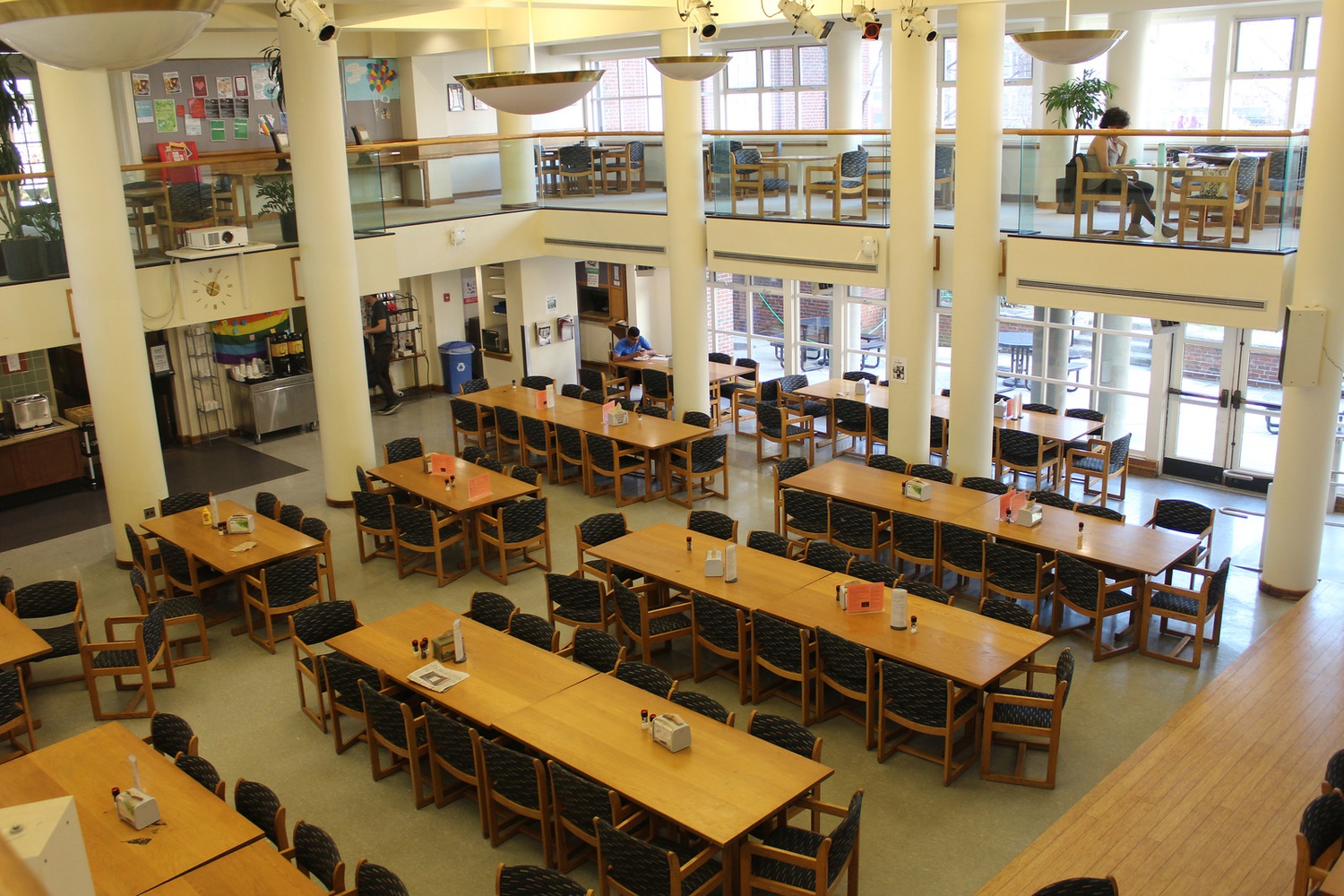 Leslie C. Ramos ’19 says the layout of the the dining hall is such that “people can be very social, but also kind of work when they don’t want to be social. It doesn’t sound like a big deal, but I think it makes a huge difference. A lot of people hang out here.”

Pfoho residents can enjoy dinner in their own dhall, but luckily don’t need to worry about trekking back to the Quad to get lunch between classes. Because of a long-past Pfoho-Adams rivalry featuring football, tug-of-war, and musical theater competition where Pfoho emerged victorious, all Pforzheimer students have swipe at Adams dhall (which normally has restrictions on interhouse lunch).Harvard University Dining Services swiper Anabela A. Pappas said Pforzheimer feels very homey. 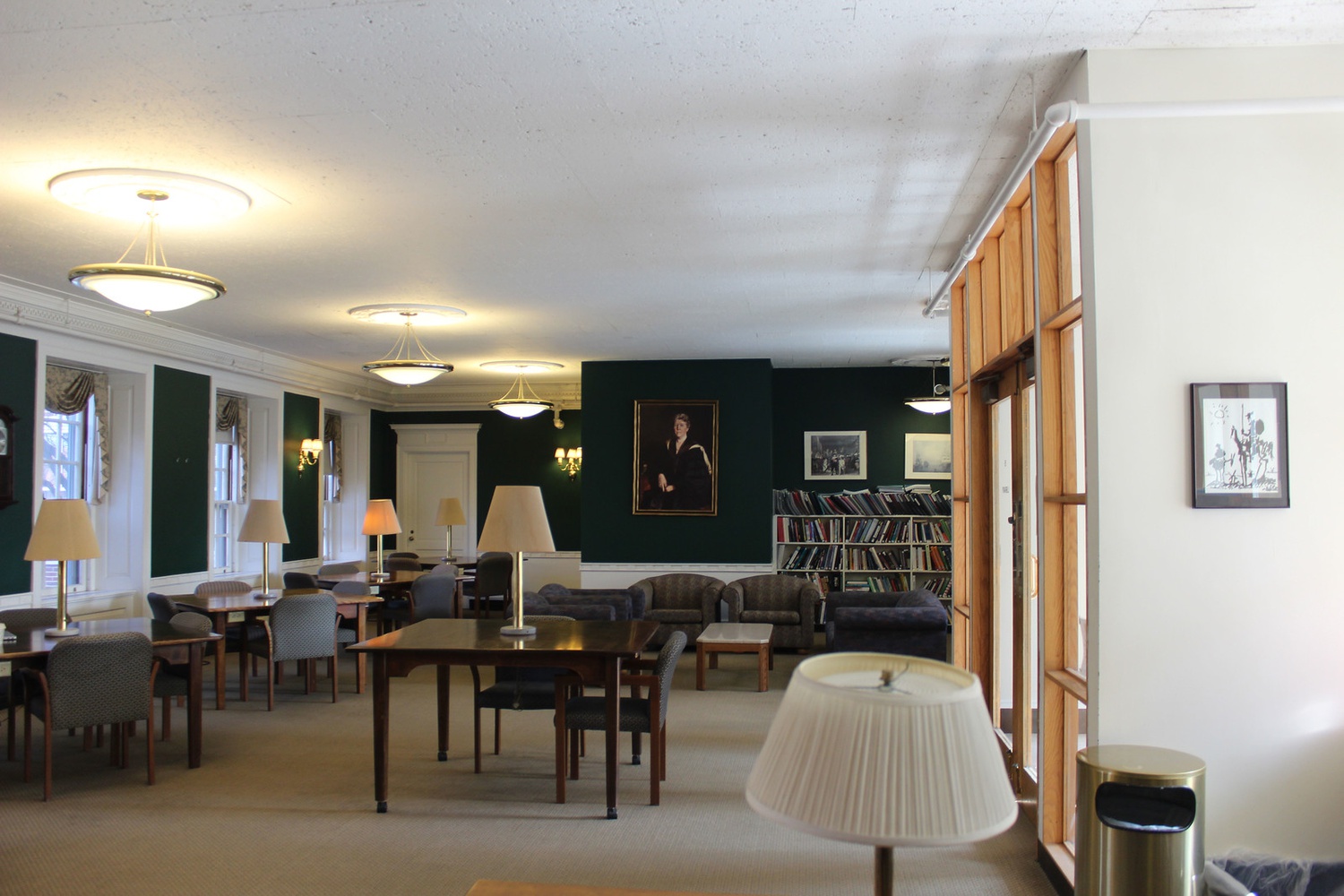 We talked to the HoCo chairs to get more on the inside scoop on what Pfoho is really like:

How would you describe the community here?

What should first-years look forward to on Housing Day?

CP: We have, like, 10 polar bears. Like, people dress up as polar bears and they squad up in the yard.

FM: We literally have 10 polar bears. We are not joking. We have 10. Every other House usually has one suit...Pfoho is one of the only houses able to, like, show up and show out on Housing Day, so we have all 10 polar bears rolling out. 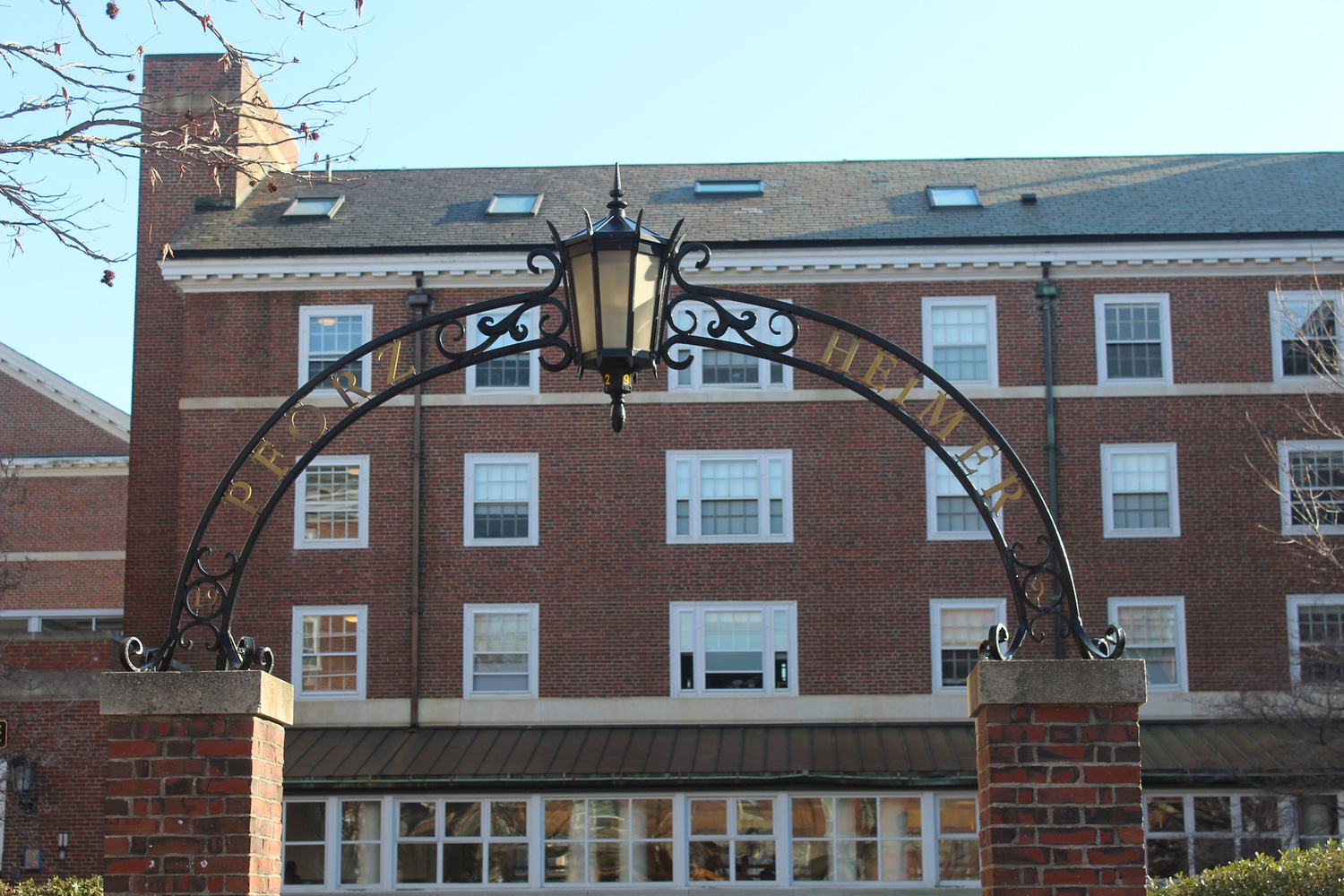