​The Springboard: Alumni in the Arts Recall Studies at Harvard 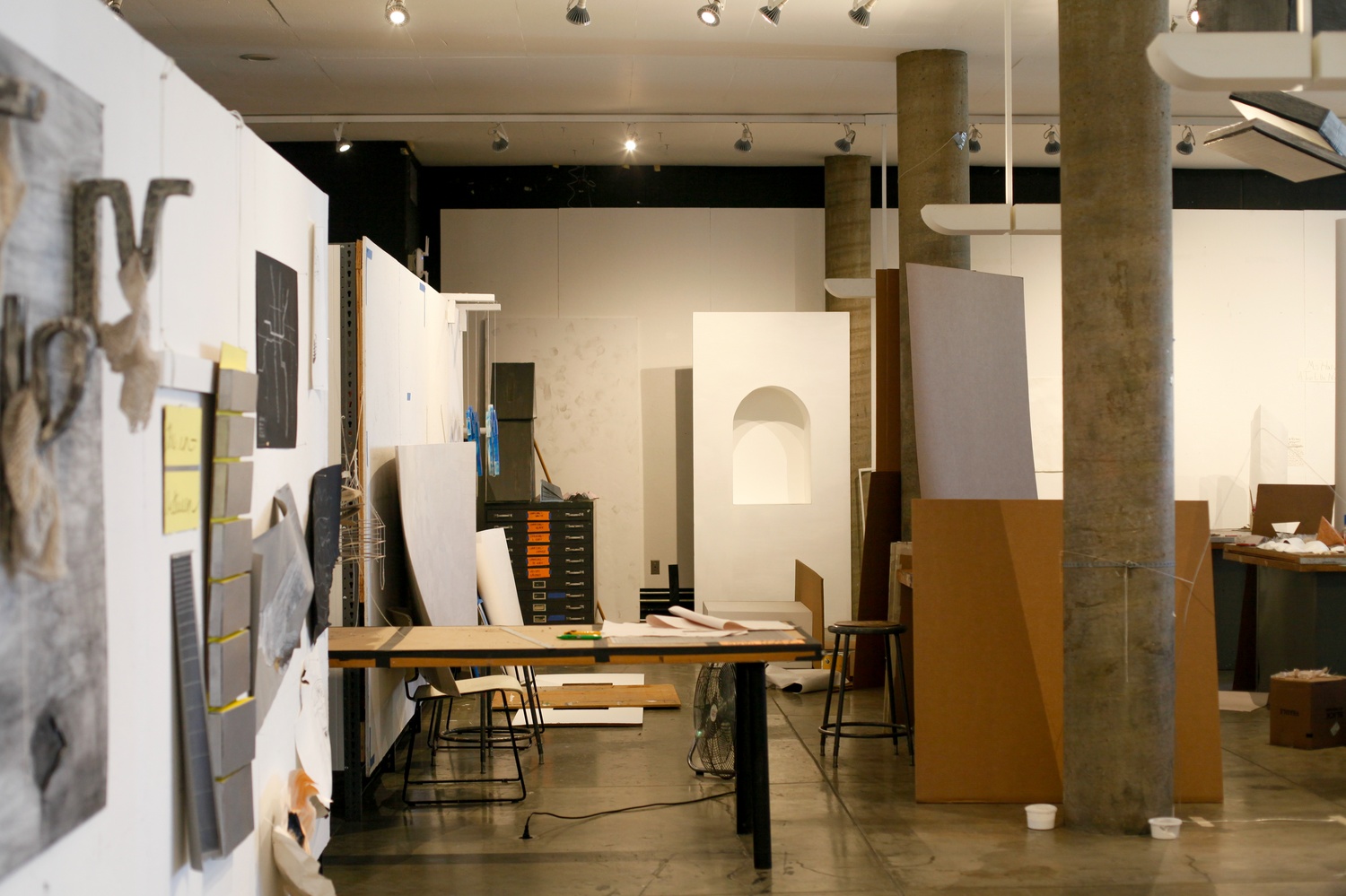 Part of the fourth floor of the Carpenter Center is dedicated to students enrolled in drawing based studio courses. By Katherine L Borrazzo
By Trevor J. Levin, Crimson Staff Writer

Some of Harvard’s most famous alumni are artists who graduated from the College 10 to 30 years ago. Although many of them concentrated in fields outside the arts and recall fewer curricular opportunities in the arts than are offered today, they remember a strikingly familiar vibrant extracurricular arts scene, and many credit academic work—artistic and otherwise—for some of their success.

Greg M. Daniels ’85 was a history and literature concentrator, but he cites creative writing classes as the most useful for his career. “I took two courses with William Alfred, who was a playwright who wrote ‘Hogan’s Goat,’” he says. “He had a freshman seminar on story and a class on playwriting that I took as a senior—very good classes, both.”

Evidently, he learned a lot. After graduating in 1985, Daniels garnered Emmys writing for “Saturday Night Live” and “The Simpsons,” but he is best known for his contributions to three of the most successful comedies in American television: He developed “King of the Hill” with Mike Judge, adapted the American version of “The Office,” and co-created “Parks and Recreation” with fellow alumnus Michael H. Schur ’97.

By writing for the Harvard Lampoon, a semi-secret Sorrento Square social organization that used to occasionally publish a so-called humor magazine, alongside comedian Conan C. O’Brien ’85, Daniels supplemented the limited academic offerings for his career choice as a television writer. “I don’t know how many other [creative writing] classes there were at the time,” he says. “I think there were some poetry and creative prose writing classes, but the playwriting classes were pretty much the choice if you wanted to do dialogue.”

One of Daniels’s “Parks and Recreation” colleagues, Dan J. Goor ’97, avoided the creative writing curriculum altogether. “Biochemistry was my concentration, so I didn’t do a tremendous number of arts classes, although I did take Introduction to Directing, which was a theater class,” he says. The class was taught by Marcus Stern, who still teaches the class—now titled “Directing”—and serves as head of directing in the Theater, Dance, and Media concentration.

But Goor named a very different academic experience as the most influential of his time at the College. “I wrote a thesis, and I have to say, I learned a lot about writing by writing that thesis,” he says. “Scientific writing is so economical, and the words you use are so important, and so that was a real training ground for writing in general for me.”

Goor identifies one element of writing a scientific paper that proved especially helpful as a comedic writer. “You’re learning how to write in somebody’s voice, and that’s the voice of the scientist, to a certain extent,” he says. Goor would later rely on that skill while writing in the voices of Jon Stewart for “The Daily Show,” Carson Daly for “Last Call with Carson Daly,” and O’Brien for “Late Night with Conan O’Brien.” Goor’s most famous work includes several episodes of “Parks and Recreation,” including the lyrics of “5,000 Candles in the Wind,” the show’s eulogy for the miniature horse Li’l Sebastian. He also co-created the series “Brooklyn Nine-Nine” with Schur.

Like Goor, Colleen A. McGuinness ’99, who produced and wrote for “30 Rock” and “About a Boy,” took Stern’s class, “Introduction to Directing.” It was her sole curricular experience with theater, despite heavy involvement with the Harvard-Radcliffe Dramatic Club, Hasty Pudding Theatricals, and the Harvard-Radcliffe Gilbert and Sullivan Players. “There was no theater concentration at the time, and [taking electives] was something you could do to supplement, but you couldn’t concentrate in that,” she says. “I certainly would have been thrilled to take more film directing classes and screenwriting, if they’d had it. When I was there, that wasn’t really the focus. I’ve seen the book now, and it seems like there’s a lot more courses being offered in those areas.”

McGuinness, an English concentrator, did take one creative writing class, a nonfiction seminar with memoirist Natalie Kusz. “It was a little challenging, because it required a lot of thought and time, like any good creative writing class would,” she says. “What I was impressed with was how serious all of the students in the class were. All the other students took their writing very seriously. Everybody seemed to have something to say, so once we read each other’s work and offered comments, everybody’s notes were thoughtful and helpful.” McGuinness says the class helped her refine her storytelling. “[It] helped me filter out what might actually be interesting to a larger audience,” she says.

For Alec J. Nevala-Lee ’02, another kind of class looms largest in his artistic development. “I took a couple classes in Latin and Greek prose composition,” Nevala-Lee, a classics concentrator, says. “You’re writing essays, basically, in Latin and Greek, so [you’re] internalizing grammar from the inside and thinking more systematically about how sentences are put together.”

Although Nevala-Lee’s “The Icon Thief” trilogy of novels is in English, he says his experience writing in ancient languages was particularly impactful. “It really did change my writing style,” he says. “It kind of alters your brain in ways that you don’t really appreciate at the time. My writing now has been shaped in really profound ways by one or two classes I took.”

Benjamin D. Scheuer ’04, whose one-man musical “The Lion” won the 2015 Drama Desk Award for Outstanding Solo Performance, believes his coursework benefited his artistic pursuits less directly. In some ways, he found Harvard’s creative offerings lacking. “The music program, I found, was more theoretical than performative, and I’m an instrumentalist and a performer,” he says. “Harvard did not offer instruction in or facilities for recording, which was disappointing to me as an undergraduate. Similarly, songwriting is extremely important to me…. That’s my job; I write songs. There was certainly no instruction in songwriting, and I think that would have been wonderful.” Scheuer expresses hope that the Theater, Dance, and Media concentration will address some of the curriculum’s shortfalls in artistic practice.

But as an English concentrator, although he did not take a creative writing seminar, Scheuer studied aspects of the arts that he says have helped him in his professional endeavors. “Studying poetry and literature and the structure of theater in English class has certainly proved valuable,” he says. “I like to put three-act structure into two-minute songs, and you get that by studying Greek theater.”

W. Couper Samuelson ’02, who has served as producer and executive producer for dozens of films, including the Oscar-winning “Whiplash,” learned other industry tips from his academic pursuits. Samuelson, a double concentrator in history and literature and romance languages and literatures, did not have room for many arts electives, but he managed to take “Visual and Environmental Studies 50,” an introductory filmmaking class. “I got in by the skin of my teeth, because it was mainly for VES concentrators at the time,” he says. “I had to go to [the professor’s] office three or four times to convince him that I was capable, or at least committed, and then he let me in.”

Samuelson believes getting into VES 50 was itself an introduction to the production process. “In a weird way, that was a good lesson for how life works,” he says. “If you want something, you might have to fight to get it.”

He also believes his concentrations have served him well in the filmmaking industry. “I think fundamentally, storytelling and the sort of critical thinking that comes with it, is something that comes out of reading Jane Austen novels and thinking critically about them, and also reading historical texts and primary sources as literature,” he says.

Samuelson reflected positively on his general experience with the liberal arts, especially as a means of exploration. “I, in general, think that a liberal arts education is valuable if you want to work in the arts,” he says. “There are some people who know exactly what kind of art they want to do when they're 17 years old, but I think that’s a pretty slender demographic of people.”