The Real Lady Whistledown Spills All 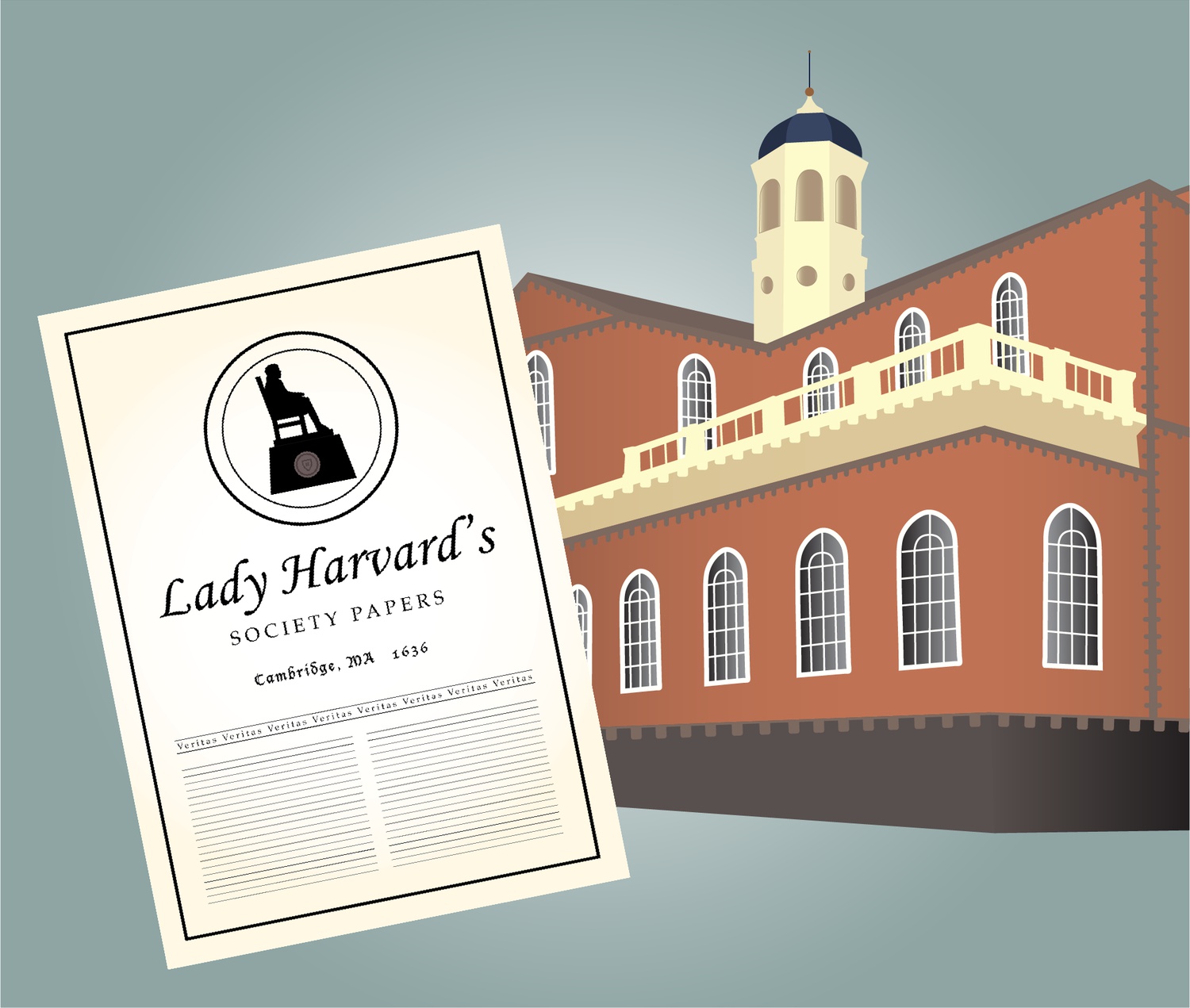 We all know that the Harvard Alumni Network is vast, but who would have thought that it includes Julia Quinn — aka Julie Cotler Pottinger ’92; aka the author of the novels that brought us the Bridgerton series (and, sigh, Simon Basset). The original tell-all Lady Whistledown agreed to be interviewed for Flyby, spilling her Harvard hot-takes, Bridgerton Season 2 anticipations, and much-needed relationship advice.

AAK: What dorm did you live in?

AAK: What did you think of Mather?

JCP: [silence] I was not looked upon well by the housing lottery gods, let’s just put it that way. It wasn’t a random lottery when I was there. It was a transition year. It went completely random the year after us. The year before us, it was this thing where you wouldn’t necessarily get what you wanted, but you would put your top three and you knew what your lottery number was. My year was a transition year where they didn’t tell you what your lottery number was — you had to try to, like, game the system. Yeah, we were this total transition year. And, yeah, we ended up in Mather. But my boyfriend was in Dunster so I guess that helped — and I married him!

Good to know that the Class of 1992’s Housing Day was just as wacky as ours will be.

AAK: What was your favorite class at Harvard?

I can’t say I knew who E.O. Wilson is, but my editor quickly let me know that the man is a legend.

AAK: What activities were you involved in on campus?

JCP: I was a Peer Contraceptive Counselor — do you still have that? We would go into freshman dorms and teach about how to use contraception, and we would also man a hotline! I worked for CityStep; I wasn’t a dancer, but I worked behind the scenes. I also worked for the Let’s Go Travel Guides. It was through Harvard Student Agencies (HSA), and they produced Let’s Go Europe and other travel guides. One summer I went to Crete and Cyprus, and then the next summer I worked in the HSA office selling the advertising for the books!

AAK: What was your favorite study spot?

JCP: I guess Lamont Library because I worked at the circulation desk, and interestingly enough, some of the closest friends I am still in touch with are the people that I worked with at Lamont, not necessarily the people I lived with! There was nothing super special [about Lamont]. I was actually looking at it — my son’s a junior in high school — so we were going through Harvard’s digital tours. We went into Lamont, and I was like, “There’s a cafe in there now?! What?” [laughs] We did not have that, but I really enjoyed working there. We had a lot of fun; sometimes we’d bring in a board game and play it at the desk while we were checking out books. And the people who were studying, every now and then one of them would wander out, and be like, “Sooo, who’s got Kamchatka right now?” A bunch of Harvard geeks, you know — they can’t resist playing Risk.

AAK: What were your favorite restaurants in the Square?

JCP: I was at Harvard Square recently, and it’s a very different food scene now, but The Border Cafe I still love. Definitely love the Border Cafe. The Hong Kong! We would order the potstickers for take out.

Looks like we’re not the only one’s mourning the loss of Border Cafe...

AAK: Did anything from your time as an undergrad at Harvard inspire parts of your Regency novels?

JCP: Not in terms of content, but I would read Regency Historical romances for fun, and that would be what I would read when I wanted to relax. But they were hard to find! I would have to go all the way to the Waldenbooks at Kendall Square because the COOP and the Harvard Book Store didn’t sell them — that was kind of a pain. When I was back on campus for my 25th Reunion, they had a big display of all of the authors in the COOP, and so they had mine in there, and I took a picture like, “Hey, Mom, I’m finally in the COOP!” 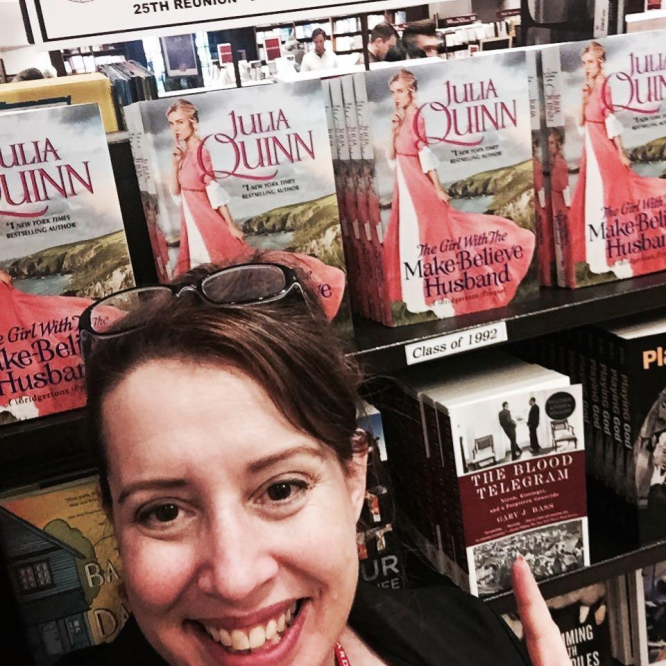 Julia Quinn featured in the COOP at her 25th Reunion! By Courtesy of @juliaquinnauthor Instagram

AAK: If Lady Whistledown had come to Harvard when you were a student… what salacious secrets would she spill?

JCP: Ooh. [silence] [prolonged silence] I can’t tell you any of that stuff! That’s a good question though.

Ok, we’re definitely *not* curious about what went down during Quinn’s time at Harvard now.

AAK: You definitely get asked this a lot, but what inspired you to start writing Regency novels?

AAK: Were you surprised by Shonda Rimes’ interest in adapting your books for Netflix?

JCP: I was totally surprised! No one was doing anything like that, because if Hollywood wanted to do a period piece, they would do yet another Jane Austen prestige piece — which is great because I love all of the Jane Austen adaptations. But I don’t think it’s a surprise that Shonda Rimes would be the person who would have enough vision to give my books, to be like, “Wait a minute, we have all this incredible source material and all these people who already love it, let’s give this a try!”

AAK: Were you surprised by the response to the show? As you know, Netflix recently declared it the most popular debut in its history.

JCP: I was pretty certain a lot of people would like it. I didn’t think it was going to be a flop. I knew that there was a huge contingent of people who liked romance novels who were incredibly excited for it, because we hardly ever get anything like it. I did not think it was going to take off like it did! That took me by surprise, and it certainly took my publishing house by surprise. The books are sold out everywhere. We can’t keep them in stores!

JCP: I get asked this a lot, and it’s as crazy as you’d think to see the characters come to life. But the part that actually surprised me the most was the scope of it. All of a sudden you realize that there are hundreds and hundreds of people working on this project that started out as just one person just in your head, and you think, “How did this happen?” When I met Adjoa Andoh, who plays Lady Danbury, she said to me, “Thank you for keeping me employed!” I told her I wasn’t sure I was the one she should thank, but you’re welcome I guess! There are so many people working there, and on top of it, they’ve formed a tight knit family because they’ve been working together day in day out for months. What’s a little odd is that I’m not really part of that family anymore. I’m sort of like the Fairy Godmother off in Seattle, eight or nine thousand miles away, so that’s a little odd.

AAK: Do you have a favorite character?

JCP: I wouldn’t say that, but the character I’d like to be when I grow up is Lady Danbury. In the books, she’s even, like more. Just more. [laughs]

Don’t we all want to be Lady Danbury?

AAK: Is there anything in particular from your books that you’re especially excited to see on screen in the next season?

JCP: I haven’t seen the scripts for season two, and I can’t guarantee what’s in them. What I hope shows up is the pall mall game, which is like a croquet game. I kind of joke that the Bridgertons make it a blood sport, since they get very competitive with it! I’m really, really hopeful that’s in season two.

AAK: On a more serious note, everyone was very intrigued by how the adaptation explores several issues that are relevant today. How do you feel about how the issues of race and race in history and literature are explored and presented in the show?

JCP: In the books that I wrote 20 years ago, I don’t think I even described the color of peoples’ skin, but it’s certainly implied they are all white. I can’t take credit for the casting. I had nothing to do with it, but I 100 percent, unequivocally, love it. I am incredibly grateful to the creative team for figuring out a great way to do this. I love that they started with a historical nugget, which was that many people believe that Queen Charlotte was of mixed race, and said, ‘Ok, what if this was accepted at the time and what if Queen Charlotte used this position to elevate other people of color to the aristocracy? What would society look like then?’ So they created this slightly alternate universe. The way I look at it is that you can have something which is totally accurate, or you could have something where more people can see themselves in a wonderful, fun story with a happy ending, and I’m going to choose the latter every time. Bridgerton is not a history lesson, it’s a show for modern audiences. The main point of romance novels is the happy ending, and the feelings people get when they read them. I want as many people as possible to get that happy feeling when watching the show.

AAK: Valentine’s Day has come and gone, so I’m wondering what was your best Valentine’s day on campus?

JCP: I did not have a bad Valentine’s Day on campus, I have to confess. I met the guy I married on the 3rd day of freshman week. My friends and I were eating at what was then called the Freshman Union; he was a junior, but he was back early because he was a FOP leader. He wasn’t my FOP leader, but his roommate was. My husband lived in Dunster House, but because it was freshman week and the Dunster dining hall wasn’t open yet, he was eating at the Freshman Union with his roommate, who saw me and they came over and ate with us. And that’s how I met him! So I had four great Valentine’s Days at Harvard.

A story as romantic as matching on Datamatch.

AAK: As a renowned historical romance novelist, do you have any timeless advice for love and romance?

JCP: I don’t know whether this will work for college students, but the smoothest thing my husband ever did for me on Valentine’s day was, when I was visiting family in Denver and he was back in New Haven in medical school, he called up my sister to get the number of a florist so he could send me flowers. And when the flowers came, he sent flowers to me, my sister, my mother and my grandmother. That is something I actually put in The Duke and I. When Simon first brings flowers to Daphne, he also brings some to Violet, her mother. You don’t actually see this moment in the show, but Daphne briefly mentions it, which is actually something I pointedly asked them to put in there! So that would be my tip to people! If you are away from your Valentine, send them, their mother, their sister and their grandmother flowers! You’ll be in forever.