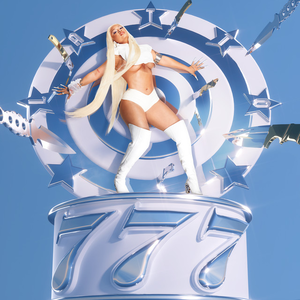 Alyssa Stephens, better known as Latto, has been in the rap game for a while now. She first garnered mainstream attention in 2016 after winning the first season of Jermain Dupri’s competition show “Rap Game.” Since then, the artist has released several albums, which are made recognizable by her trademark fast-paced flows, biting freestyles, and heavy, Atlanta-specific Southern accent. Unlike many rappers from the Southeast, Latto’s words and pronunciations are always clear, and her message is even clearer: She is the Queen of the South.

This new album trades out the braggadocio for a slower pace, some vulnerability, and a more melodic, pop-music sound. While this album is a fun addition to Latto’s discography, some of the featured artists given lackluster performances and the transition into pop-rap does not always succeed.

The album starts strong with some dramatic, powerful beats in “777 Pt. 1” and “777 Pt. 2.” The two part intro announces Latto’s presence at the top and her readiness to transcend boundaries: “Only category they gon' put me in is the greatest.” “777 Pt. 2” has some more dramatic background vocals than what Latto typically uses, but for the most part, these intro songs are consistent with Latto’s career — sharp, vibrant, and fast.

The next two songs on the album were both released as promotional singles for the album. “Wheelie” featuring 21 Savage was released in early March and was an immediate success. Unlike the predictable nature of “Wheelie,” “Big Energy” is entirely unlike Latto’s other projects. The song opens with a funk sample from Tom Tom Club’s 1981 song “Genius of Love,” and maintains a lighter, pop beat for the rest of the song. Latto plays with the popular phrase “big d—k energy,” stripping the specifically male connotation and turning the phrase into a gender-free expression of mutual empowerment with “A boss like you need a boss like me.” The track is her most listened to song by a landslide, and marks her transition into pop-rap.

Next is “Sunshine,” which is perhaps Latto’s highest-profile song to date in terms of collaborations. Featuring both Lil Wayne and Childish Gambino, this song has melodic, gospel threads and feels closely related to Chance the Rapper’s distinctive “Coloring Book” style. But Latto is not a singer, and the heavily autotuned singing is awkward, bordering on unpleasant compared to her typical powerful and distinct voice.

Both Lil Wayne and Childish Gambino give fantastic verses, but their presence on this song speaks more than their content. For Lil Wayne and Gambino to collaborate on an album together sends a clear message: The rap industry believes and supports Latto — and they are willing to put muscle behind it.

Latto returns to her more traditional sound for “It’s Givin,” “Stepper (feat. Nardo Wick),” and “Soufside.” These songs are fast, her verses are smart, and she raps them powerfully. Before the end of the album, though, she jumps up and out of her traditional style. In “Trust No Bitch,” she opens up about being taken advantage of and unsupported, but always coming out on top. The beat is slow and she sings the hook, both new tactics for her. The hook is melodically odd, but not unpleasant, necessarily. The slower beat, on the other hand, allows Latto to have a more complex flow, which makes her message more emphatic and allows her lyricism to shine.

She ends the album with the track “Real One,” which has an effective slow beat but is undercut by an awkward melodic hook. The intention to start the album powerfully and end with a softer, R&B track is admirable, but this song ultimately fails and ends the project with little of the momentum it started with.

The weakest part of this album, though, is about two-thirds of the way through the album with “Bussdown (feat. Kodak Black).” Latto’s vocals are heavily autotuned and somewhat strained, and the slow beat does not work in this song the way it does for others. Kodak gives a sub-par verse, at best, and the song ends with a soft piano outro. There is nothing redeeming about this song, and it pulls the rest of the album down.

Overall, this is not Latto’s strongest album, but it does follow a strategic and historically successful trajectory.

When Cardi B released her 2018 album “Invasion of Privacy,” she was on a very similar path as Latto. After two albums of braggadocio and aggressive songs about sex, money, and musical success, “Invasion of Privacy” brought Cardi into the realms of pop-rap, R&B-rap, and Latin-rap. This album launched Cardi’s career in a way nobody could have expected, and she never looked back. It appears that Latto has the same intention for “777.” By incorporating pop and R&B elements, she opens up her audience significantly. Her mistake, though, was failing to diversify her features. If Latto had traded one of her many male hip-hop features for an R&B singer to help her expand her brand, the expansion might have been more successful. Of course, endorsements from Lil Wayne and Childish Gambino are great for exposure, but Latto needs to make sure that her features are as talented, if not more so, as she is. Lil Durk and Kodak Black are neither.

Aside from just the quality of the artists, Latto’s featured artists have other questionable behavior. During a mid-March appearance on Big Boy’s Neighborhood talk show, Latto said “It’s a feature on my album that it was difficult to clear, and they like trying to drop their nuts on me because I won’t respond to a DM.” So, not only did some of her features not match her talent, one actively disrespected her as a person and professional in a way that male artists typically do not have to endure. Latto, just like Cardi, is no fool. She is strategic and unintimidated by patriarchy.

This album is clearly a stepping stone, but one thing is clear to listeners: Latto’s expansion has begun. She is leaving behind her exclusively Southern rap to embrace a wider variety of styles, with some attempts more successful than others.