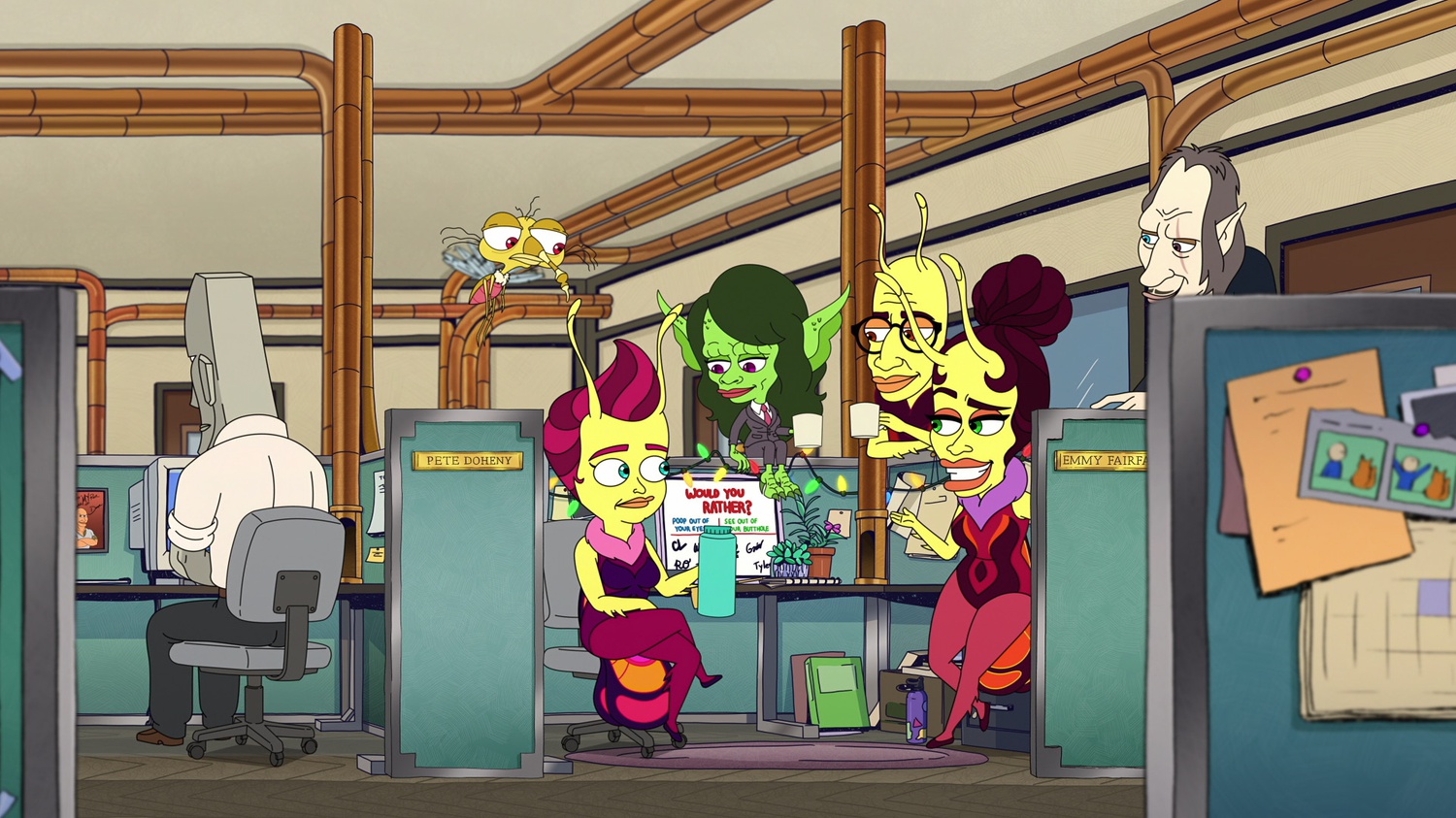 Season one of Netflix’s “Human Resources” debuted March 18 much to the excitement of loyal fans of “Big Mouth,” the show's predecessor. By Courtesy of Netflix
By Sawyer Taylor-Arnold, Contributing Writer

Season one of Netflix’s “Human Resources” debuted March 18 much to the excitement of loyal fans of “Big Mouth,” the show's predecessor. While “Big Mouth” centers on a group of teens experiencing the trials and tribulations of puberty (inspired by creators Nick Kroll and Andrew Golberg’s own adolescent experiences), “Human Resources” follows the fantastical creatures sent to help these teens navigate their emotions, introducing viewers to the whimsical alternate universe they inhabit. With an entourage of Hormone Monsters, Lovebugs, Shame Wizards, Depression Kitties, Anxiety Mosquitos, Logic Rocks, and more, season one of “Human Resources” nimbly straddles the lines between crass humor and surprisingly touching, nuanced explorations of human emotion.

The familiar humor of “Big Mouth” is present in much of its spin-off, which is similarly built on plenty of raunchy jokes and catchy musical numbers. Fans of the former will recognize Hormone Monsters Connie (Maya Rudolph) and Maury (Nick Kroll), in addition to some newer returning characters, like Lovebugs Rochelle (Keke Palmer) and Walter (Brandon Kyle Goodman) who appeared in season five of “Big Mouth.” Viewers may also notice the absence of some well-loved former writers and voice actors like John Mulaney (making only a small cameo in episode six), though this is quickly overshadowed by talented new additions like Aidy Bryant of “Saturday Night Live” and Randall Park of “Fresh Off The Boat.”

The cast of “Human Resources” is also notably more diverse than that of “Big Mouth,” showcasing a spectrum of backgrounds and identities that undoubtedly inform the range of topics explored in season one. There are more depictions of queerness, families and people of color, interracial relationships, and experiences of immigration. Perhaps this is in line with what seems to be an attempt to broaden the current fan base and expand the shows’ focus beyond the confines of puberty. Perhaps it was done to be cognizant of missteps made with the casting of “Big Mouth” and the controversy that ensued when white actress Jenny Slate voiced Missy, one of the only Black teenagers in the show, before she was replaced by Ayo Edebiri in Season Four.

While “Human Resources,” like “Big Mouth,” dedicates plenty of time to cracking jokes about sex with the Hormone Monsters, it also contains several compelling storylines about love and connection. Lovebugs Emmy (Aidy Bryant), Rochelle, and Walter help the humans they guide explore love in its many forms — from the romantic to the familial — as they navigate their own office romances, friendships, and relationship debacles. Though the humor of season one is most often found in Rudolph and Kroll’s characters, the show hits its stride with its honest and touching depictions of love.

“Human Resources” is replete with such storylines, but two in particular take the cake: Lovebug Emmy’s relationship with new mother Becca (Ali Wong) and Lovebug Walte’s with Yara (Nidah Barber), an elderly Lebanese woman living with Alzheimer's and dementia.

In the former, Emmy helps Becca navigate motherhood on Earth as she becomes subsumed with postpartum depression, an initial struggle to connect with the baby, and marital issues. As Emmy tries to support Becca emotionally, the show delivers a frank portrayal of the rather unglamorous sides of motherhood and the trauma mothers’ bodies incur in childbirth; it avoids glorification and cheap comedic moments as it parses through the realities of new motherhood with striking honesty.

While Emmy and Becca navigate the beginnings of life, Lovebug Walter spends time with Yara at the end of hers. Though some of Yara’s storyline focuses on her son’s difficulty grappling with her situation, much of it examines what it means for her to live with Alzheimer’s and dementia. Memories of young love and past joy are woven into the storyline and juxtaposed with the confusion and anger often associated with Alzheimer's, a moving choice for a humanizing and nonlinear portrait.

Perhaps a bit counterintuitive considering “Big Mouth”’s penchant for non-stop crass humor, it is these moments of love, loss, and humanity that are the most rewarding in the debut season of “Human Resources.” Viewers will be met with a frank yet humorous exploration of key moments of life — from first love to marriage and birth to death — in this unique spin-off that is well worth the watch.