From Coachella: Doja Cat Should Have Headlined Day Three 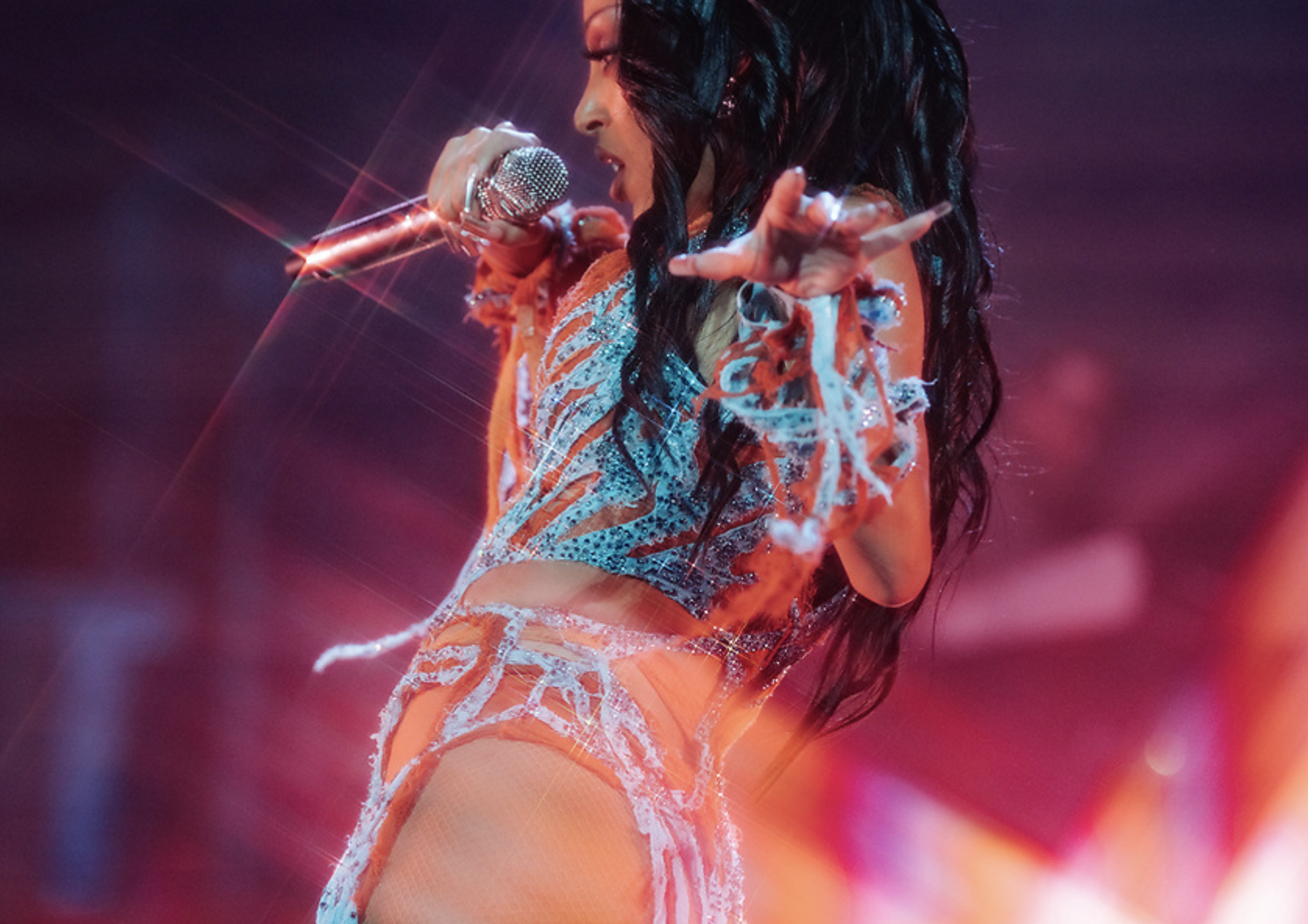 Doja Cat gave stellar performances at both weekend one (pictured) and weekend two of the 2022 Coachella Valley Music and Arts Festival. By Courtesy of Coachella / Greg Noire
By A.J. Veneziano, Crimson Staff Writer

As fans flooded the main stage of the Coachella Music Festival to see pop superstar Doja Cat, it was clear they were anticipating nothing short of an awe-inspiring performance the Los Angeles singer is known to deliver. What they didn’t know, however, was that they were about to see the wackiest, most energetic, and overall best act of the final day.

From the beginning of the night’s set, Doja Cat exceeded all expectations and became the queen of the stage. Opening with the hypnotic “Woman,” she set into a funky beat and joined in on intricate choreography with her background dancers. When the rap section of the song came around, she enunciated every word with confidence and sass, not even pausing to catch her breath. Accompanied by a full band on stage, the live performances of her songs allowed her rapping abilities to reach new heights.

Most notably, the set was — for all intents and purposes — a rock concert. TikTok superhit “Say So,” which is known for its lighthearted, playful groove, opened with a heavy-metal guitar solo with the likes of a Metallica riff. Doja Cat rose up onto the stage from a trapdoor wearing a leather harness, and, as the music stopped, sang, “It’s been a long time since you / Fell in love.” It was at this moment that the rendition became recognizable, proof of Doja Cat’s chameleon flair. The chorus featured heavy bass drum and electric guitar improvisation, and Doja Cat belted the lyrics as opposed to the softness of the studio album version. Instead of rapping the verses, she shouted the words in an emo-punk manner, which only added to the shock value of the performance.

Following “Say So,” Rico Nasty walked onto the stage for a surprise performance, wearing a spiked leather collar and spiked sleeves. Together, the pair sang a rock version of their 2019 collaboration “Tia Tamera.” Heavy synth tones blasted from the speakers, and again the electric guitar player improvised on stage. This time, the music stopped and allowed for a drum solo, which drove the audience wild. Expecting a pop concert, the Doja Cat’s massive audience received a spectacle of beautiful madness instead.

In addition to these updated renditions of her music, Doja Cat’s concert was rife with all of the quirky personality her fans love. These unique Doja-isms shone exceptionally well through the costume design on display throughout the show. During “Get Into It (Yuh)” from 2021’s critically acclaimed “Planet Her,” for example, four-legged mythical creatures creepily crawled on stage and weaved through the background dancers. Later, during “Go to Town,” background dancers walked out wearing bright-green fuzzy ponchos which looked straight from the set of “How the Grinch Stole Christmas.” Among the few times Doja Cat spoke to the audience, she stood atop a thirty-foot-tall spiral staircase and said, “I like you guys. You guys are cool.”

This being said, her set was by no means solely a performative spectacle. Specifically during “Alone,” Doja Cat's raspy, sweet voice shined through. During this slower track, she got down on her knees and focused on her vocal execution. Staring off into the crowd, she slowly swayed to the bass guitar beat and sang, “Is it crazy I’m not scared to be alone?”

More than any other performance on Sunday, Doja Cat’s set was endlessly entertaining. With five costume changes, crazy set design, and two guest artists (Tyga also appeared for a surprise song), it was impossible to know what was going to happen next. The vibes of the show shifted anywhere from sexy and flirtatious to angry and intense, which not only made for a dynamic concert experience but also demonstrated the breadth of range in the rapper’s music.

Coachella also meant the debut of two new songs, “Vegas” and “Shots.” Both tracks featured the hip hop and pop fusion characteristic of Doja Cat’s music, yet each one possessed a unique production which distinguished their artistry. “Vegas,” from the soundtrack of Baz Luhrmann’s upcoming biopic “Elvis,” included soul samples and smoother R&B vocals, whereas “Shots” — Doja Cat’s encore — was a high-energy, intense, rock-adjacent track. As the electric guitar blasted, Doja Cat said, “I brought the fucking Mexican pizza back” and exited stage left.

Doja Cat entertained, wowed, and gave the performance of a lifetime. Although The Weeknd, joined by Swedish House Mafia, gave a sufficient performance to close out the night, the 100-minute time slot at the end of the night could have just as easily been reserved for Doja Cat.

After Ye dropped out of the festival, there was no need to search for an outside artist. Sunday’s headliner was there in plain sight, singing, “Bitch, I’m a cow.”