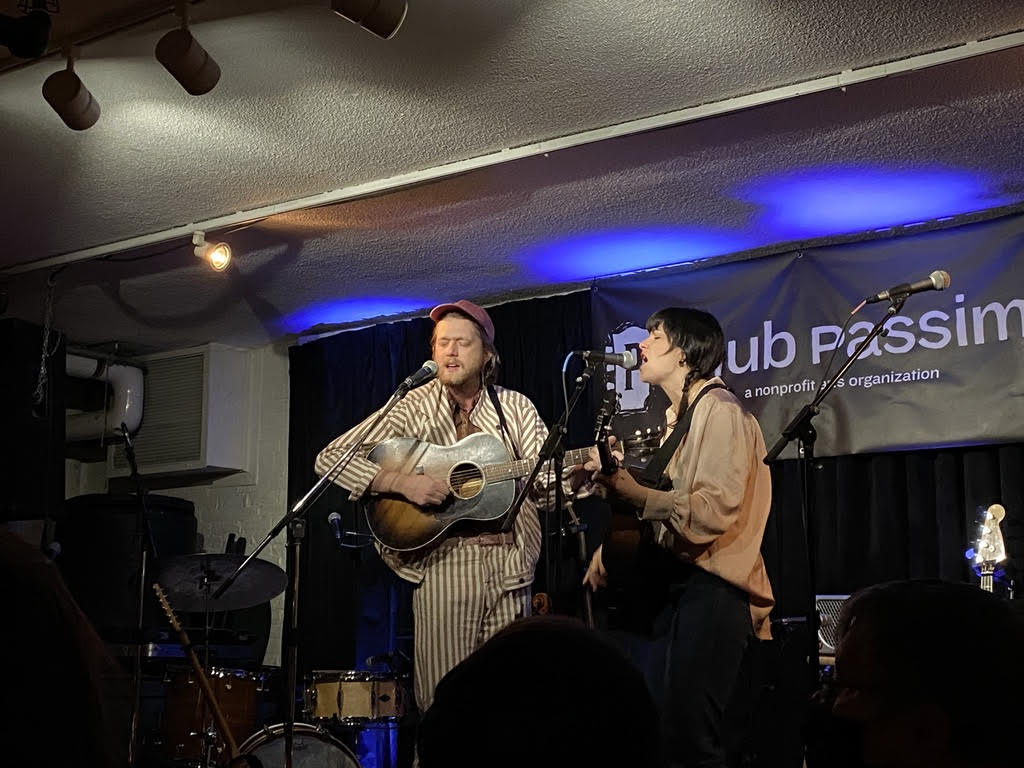 Taylor Ashton returned to the Club Passim stage to end a six show tour run on April 4. Ashton had last come to Cambridge for a virtual live stream on May 1, 2020. This time around, the audience welcomed him back with lively in-person applause.

The cozy Club Passim stage complimented Ashton’s playful and evocative lyrics. Dressed in a loud blue and white jumpsuit and adorned with face glitter and his signature asymmetric earrings, Ashton brought his artistry to the stage before the music even began. His sound took on a special acoustic life with a guitar, bass, drum kit trio group to play his witty and touching songs.

Ashton opened the show solo, singing the first verse of “F.L.Y,” the first track on his latest album, “The Romantic,” without accompaniment. His deep voice resonated around the room as he climbed up and down octaves. With his gaze fixed above the crowd, the stage lights shimmered on the gold glitter around his eyes. “Feels like yesterday, feels like years ago,” Ashton serenaded the audience as he sang about the conundrum of passing time. Time, or “the tyranny of the big clock,” as Ashton called it in “F.L.Y,” would be the theme of the set. The song “Nicole” explored the doldrums of lost love. “Strangers” played with the strangeness of people going from strangers to lovers.

Each song was surrounded by banter and explanation. Ashton’s commitment to conversation with the audience embodied the candid spirit of the singer-songwriter. The audience walked away with more than just memories of songs, also forming newfound connections to the stories behind them.

Ashton’s interludes between songs also included plenty of lyrical meditation. His philosophic musings about time as a useful illusion were accompanied by fantasies of using honey as a healing elixir on an adventure hike and other eccentric stories. The back and forth between song and conversation broke down the audience-performer barrier and made the show intimate.

The set was filled with syncopated guitar rhythms and gentle banjo melodies. Ashton’s trademark banjo sound is characterized by his clawhammer style, unique tuning patterns, and thick nylon strings. “Pasadena,” which can be found in his Brooklyn Folk Festival performance last year, was one such song that exhibited both Ashton’s vocal range as well as his creativity in crafting clawhammer banjo melodies.

Ashton’s vocals and guitar did the work of many musicians. His rhythmic strum patterns varied between muted strikes, partial chords, and riffs syncopated with vocal melodies. His style of playing produced stark contrasts and unique sounds. The accompaniment of bass and drums embellished his individual proclivity with his instruments.

No song represented the musicality of the trio better than “Skeletons by the Sea” — a song of self-love that celebrates all human bodies. Ashton extended the live version of the song with instrumental fills and sudden stops. The group seamlessly changed tempo and dynamics for a layered performance that made the performance seem bigger than three people. The song enshrined Ashton’s wistfulness and lyrical finesse, contemplating the beauty of all people having skeletons under their skin in joking rhymes. Joy emanated from the lyrics and brought to mind visceral memories of summer days spent cooling off swimming.

Ashton closed the show with a solo performance of a song from an upcoming project. In fact, many of the songs Ashton played are still unreleased. New releases are coming soon, however. According to Ashton, there is a fully mastered album sitting in his Google Drive right now, waiting to go through the release pipeline soon. One thing is for sure: Until he returns to Cambridge, his eager fans will be on the lookout for these projects.

—Staff writer Jacob R. Jimenez can be reached at jacob.jimenez@thecrimson.com.