Sundays in the Courtyard: ‘Requiem for the Enslaved’ at the Isabella Stewart Gardner 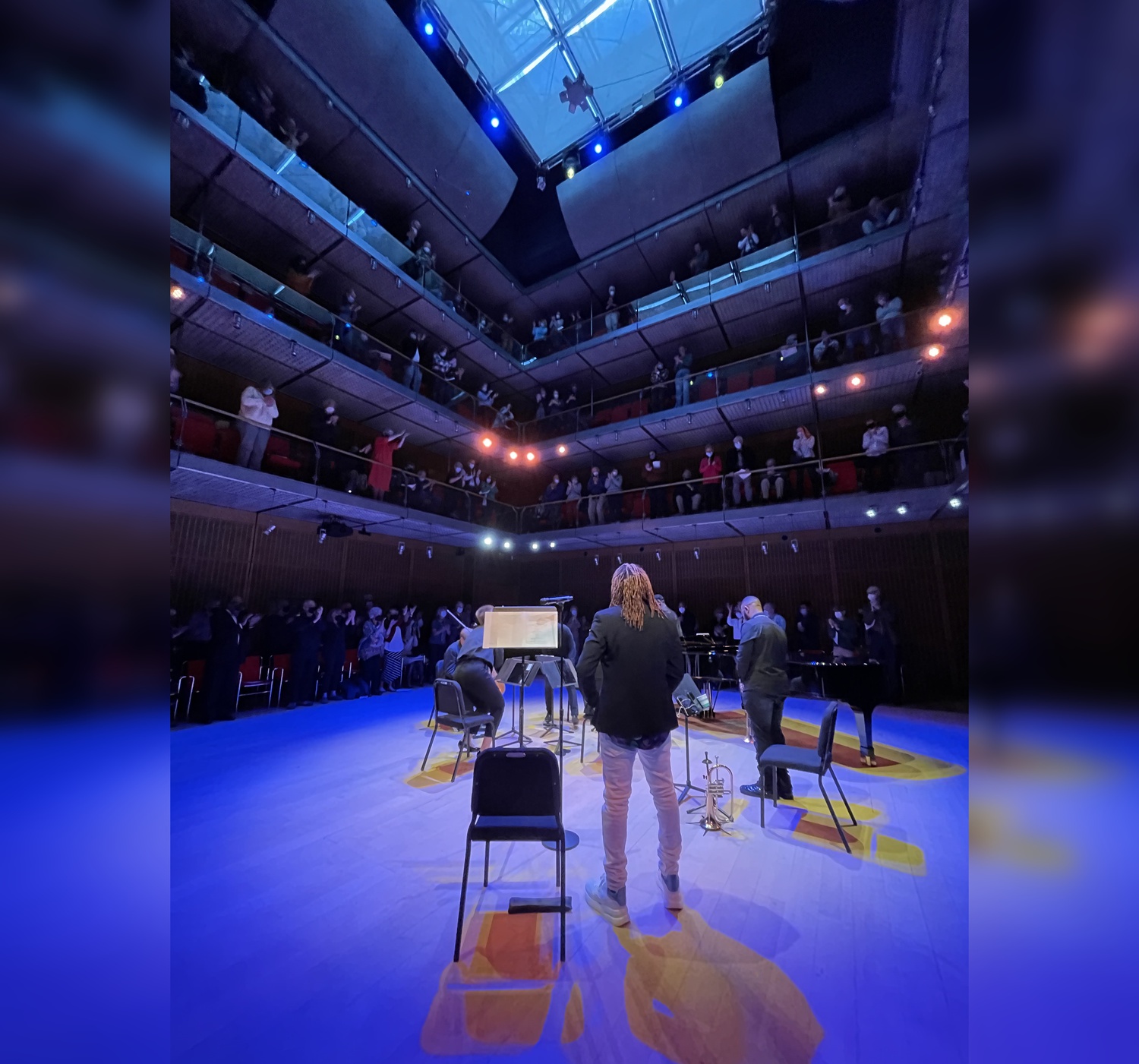 “Requiem for the Enslaved,” an album composed by Carlos Simon, was performed for the first time to a live audience on Sunday, Oct. 9 by spoken word artist Marco Pavé, Boston-based quartet Hub New Music, trumpet player Jared “MK Zulu” Bailey, and Simon himself on piano. The Isabella Stewart Gardner Museum hosted the world premiere as part of its Weekend Concert Series, where it welcomes classical musicians to perform on Sunday afternoons in its four-story Calderwood Hall. (For articles on past Weekend Concert Series events, click here.)

Simon, an assistant professor at Georgetown University, was commissioned by the university to compose the musical piece in honor of the 272 enslaved individuals who were sold by the Maryland Province of Jesuits in 1838. As explained in the event’s program, the album “features music that evokes the spirit of those in captivity” and “artistically explores the sacred and historical ideology of the sale of those enslaved by Jesuits.” The concert featured a range of styles that moved listeners and engaged them with every note and line of spoken word.

Simon made this clear to the audience after the show, when he outlined the motivations of the musical project.

“I had two objectives with this piece: to honor those men, women and children who were property, and to shine a light on systemic racism,” Simon said. “There’s no way we can talk about racism today without talking about slavery.”

To accomplish his goals, Simon reached out to Pavé, a hip-hop artist and social activist based in Washington, D.C., to write and perform spoken word in the piece. Amidst the height of the pandemic, Pavé and Simon worked on the album by sending audio clips back and forth to one another.

The concert began with a pre-recorded recitation of the names of the enslaved people sold by Georgetown’s founders, from adult men to young children. In between Simon’s original songs, the musicians reprised the tunes of ‘Swing Low, Sweet Chariot’ and the Gregorian Chant throughout the 45 minute work. The fusion of an African American spiritual and Catholic requiem along with hip-hop lyrics created an entirely new sound and a unique listening experience.

After the performance, the musicians held a question-and-answer section during which Simon solicited reflections and questions from audience members. Hub New Music founder and flutist Michael Avitabile, also had the opportunity to share his thoughts.

“It’s just been a privilege to be a part of this and for [Simon] to trust us to tell this story with [him]. It’s really, really powerful,” Avitabile said.

Pavé also took a moment to describe his creative process, which included intermittent spoken word sections blended seamlessly into musical interludes. Intended to juxtapose the sounds of the quartet and the piano, Pavé’s lines included both original work and the words of Frederick Douglass.

“This whole process was completely different for me — the content of it was super deep,” Pavé said. “I was having dreams, ancestors coming to me, speaking to me, telling me different stories of what happened to them. I went to the grounds of the Underground Railroad Museum in Memphis and just sat there with the spirits of that energy to really bring the energy of the project to life.”

The piece comes at a time when other major institutions are grappling with the legacy of slavery on their campuses. At Harvard, the Report of the Presidential Committee on the Legacy of Slavery detailed the university’s past contributions to racial injustice and its future plans for reparations. With “Requiem for the Enslaved,” Simon strove to acknowledge those affected by slavery in a unique and meaningful way, uniting artistic styles in a single performance at the Isabella Stewart Gardner Museum. It is available to stream on YouTube and Apple Music.