‘In the Lateness of the World’ Review: A Meditative Journey through Thought and Time 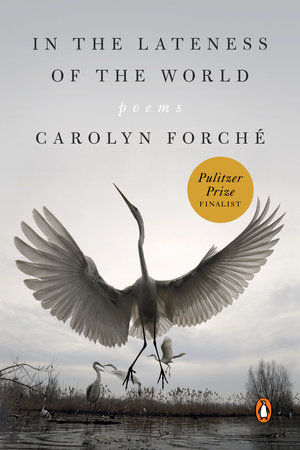 Cover of 'In the Lateness of the World' by Carolyn Forché By Courtesy of Penguin Random House
By Daniel S. de Castro, Crimson Staff Writer

“In the Lateness of the World” is poet and translator Carolyn Forché’s first new collection of poems in 17 years. Released in March 2021, the collection contains poems that originally appeared in publications such as the “Boston Review,” “The Nation,” and “The New Yorker,” rather aptly indicating the quality of writing that can be found between its covers.

While they don’t tell a single story, the individual poems that make up “In the Lateness of the World” take the reader on a meditative journey of thought and reflection, presumably the same journey on which Forché embarked in order to better understand the balance between life and death. As one would expect, spirituality plays a large role in this collection, though with pointed allusions to aspects of all the major faiths, Forché’s work is tastefully universal. Spirituality is not, however, the only theme battling for the reader’s attention, being joined also by the tides of history.

The journey on which Forché takes her readers within “In the Lateness of the World” is as much a trip through the human past as it is a spiritual soul-searching. Throughout the collection, the reader is transported to different places across the world and different epochs across time as Forché relives the past, both the world’s and her own. Her work is filled with artful descriptions of fields covered with snow and cliffsides battered by the sea, but the real magic is in the details, in the images of a cinched and broken-locked suitcase or the dust raised by the wings of a kaleidoscope of butterflies.

These details are what give substance to the transient moments and stories that Forché relives in this collection, the ones that truly make the collection worth reading. This imagery is the heart and soul of the collection, allowing her to bring to life the scenes from her memory and fill the blank canvas of the imagination with the lifeforce of the departed.

The poems in this new collection come in groups, dedicated to the exploration of the same themes, the same physical places, and what one can assume to be Forché’s memories of the same person. In fact, many of Forché’s poems carry dedications, which in part explains her habit of directly addressing the reader. Perhaps more importantly, however, this level of intimacy with the reader has the effect of making them a protagonist in each of Forché’s memories; as a result, each poem comes off as even more vivid and, as is the mood of the collection as a whole, more poignant.

Overall, Forché’s poems strike a solid middleground between being too simple and too complex. They are properly nuanced but not unreadable, with enough complexity to keep readers interested and entertained but not so much as to make them frustrated. Allusions abound — mainly religious and to other works of poetry — oftentimes leading the reader down new and digressing avenues of exploration, all without obfuscating the core message of any single poem. Forché’s language itself is tasteful, soft, and quiet, and it is clear that much thought has gone into this choice in diction, which is instrumental in perpetuating the trancelike feel that the collection takes on.

In the end, “In the Lateness of the World” is as much the thoughtful, poignant, and artful collection of poems that it is advertised to be. Forché’s work in this collection is profound, taking the reader on a vivid journey of reflection that explores the intersection of history, spirituality and memory. It would seem that her 17 year hiatus was indeed worth the wait.