Kings and Queens: The A.R.T. Hosts a Drag Performance Roundtable 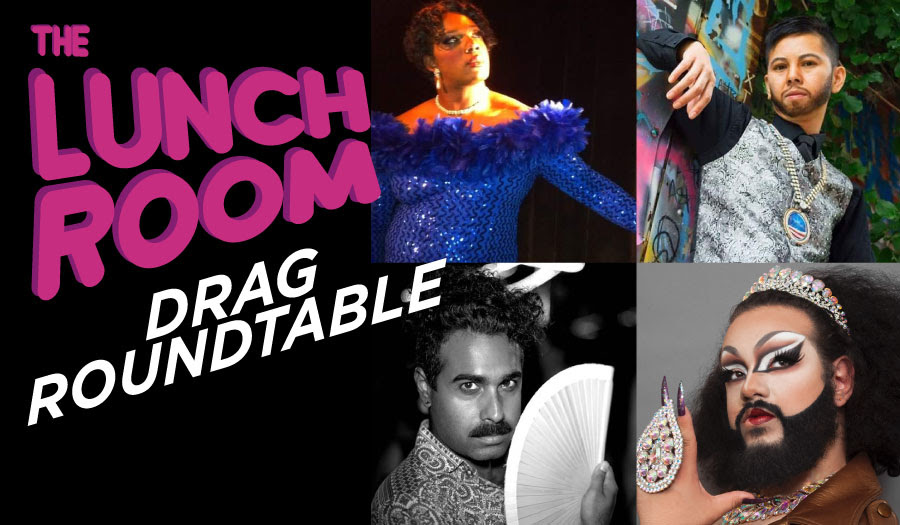 “Welcome to you, welcome to your drag aesthetic and your people, again, the ones that we honor, the ones that we create these personas around, some known, some unknown.” These words marked the beginning of “The Lunch Room: Drag Roundtable,“ a virtual panel on drag culture hosted by the American Repertory Theater on March 16.

It’s been over a year since the A.R.T. closed its doors due to the coronavirus pandemic. However, the theater continues to provide a variety of virtual programming, including “The Lunch Room,“ a free weekly virtual talk show featuring artists, activists, and civic leaders. Last week’s installment was hosted by drag queen Nina Fahari and featured three speakers: Jayden Jamison, the drag king persona of Quyen Tran; professor Dr. Kareem Khubchandani, who performs as LaWhore Vagistan; and drag queen Just JP.

Mark Lunsford, the Artistic Producer at the A.R.T. who has hosted “The Lunch Room“ in the past, said that the series was created to connect artists and audiences during the pandemic through a “grab bag” of “eclectic” conversations.

“In the beginning we were really focusing [on] direct artist conversation,” Lunsford said, “and now we’ve really tried to expand that into thinking about [the A.R.T.] as a cultural institution and what kind of cultural conversations we want to be in with partners, whether they be in the performing arts or not.” Specifically, he explained, the decision to feature drag performers was influenced by the importance of the drag to the audiences at Oberon, the A.R.T.’s club venue.

The panelists spoke about creating their drag personas, utilizing their performances for education and activism, and performing virtually during Covid. One theme that emerged in the roundtable conversation was the importance of personal identity and culture in shaping their personas. Khubchandani said that he chose the name LaWhore Vagistan (a play on “Lahore,” a city in Pakistan) in response to growing up outside the Indian subcontinent, even though his family is from Pakistan. His drag persona is also inspired by his mother and aunties, who allowed him to express himself outside of the conventions of masculinity.

Tran also cited personal identity as an important factor in her drag experience, explaining that creating Jayden Jamison’s persona (whose aesthetic she describes as “pretty gay boy twink”) helped her gain confidence as a Vietnamese lesbian who “didn’t feel seen or desired” within the BGLTQ community when she came out, due to assumptions about Asians being “studious” or “geeky” instead of possible romantic partners. Being able to inhabit a confident persona, she said, allowed her to become more confident in herself.

The panelists also spoke about using drag as activism. As the only drag king on the panel, Jamison spoke in an interview about feeling a responsibility to raise awareness of the drag king community. He also spoke about using his platform amid recent racist attacks against Asians, saying that even though he sometimes doesn’t feel accepted by his community, he wants to use his platform to advocate for them. Khubchandani also expressed his desire to carve out space for people of color in what he described as a predominantly white drag scene in Boston.

In an interview, Just JP spoke about the challenges of performing explicitly political numbers such as a number criticizing Christopher Columbus, which they first performed for Indigenous People’s Day 2017. Just JP claimed they have faced reluctance from some event organizers to book them, because they are “too political.”

“Sometimes their audiences don’t want to listen to politics and they just want to have a good time, and I understand that,” Just JP said. They emphasized, however, that they would continue to perform these numbers.

The panelists also discussed how virtual platforms created challenges during the pandemic, such as the difficulty of attracting an online audience. However, Khubchandani pointed out that these platforms have the ability to connect performers globally. The panelists also highlighted the importance of mutual aid and the necessity of tipping drag performers, many of whom face financial struggles because the current public health restrictions limit their opportunities to perform.

Fahari, who was the first person outside of the A.R.T. staff to host “The Lunch Room,“ said she saw hosting the roundtable as an opportunity to foster human connections in the midst of “a deep moment of isolation.” “[This decision] showed how an institute can turn over its platforms to partners and individuals,” Fahari said. As the series continues, the A.R.T. will have more opportunities for this community engagement.