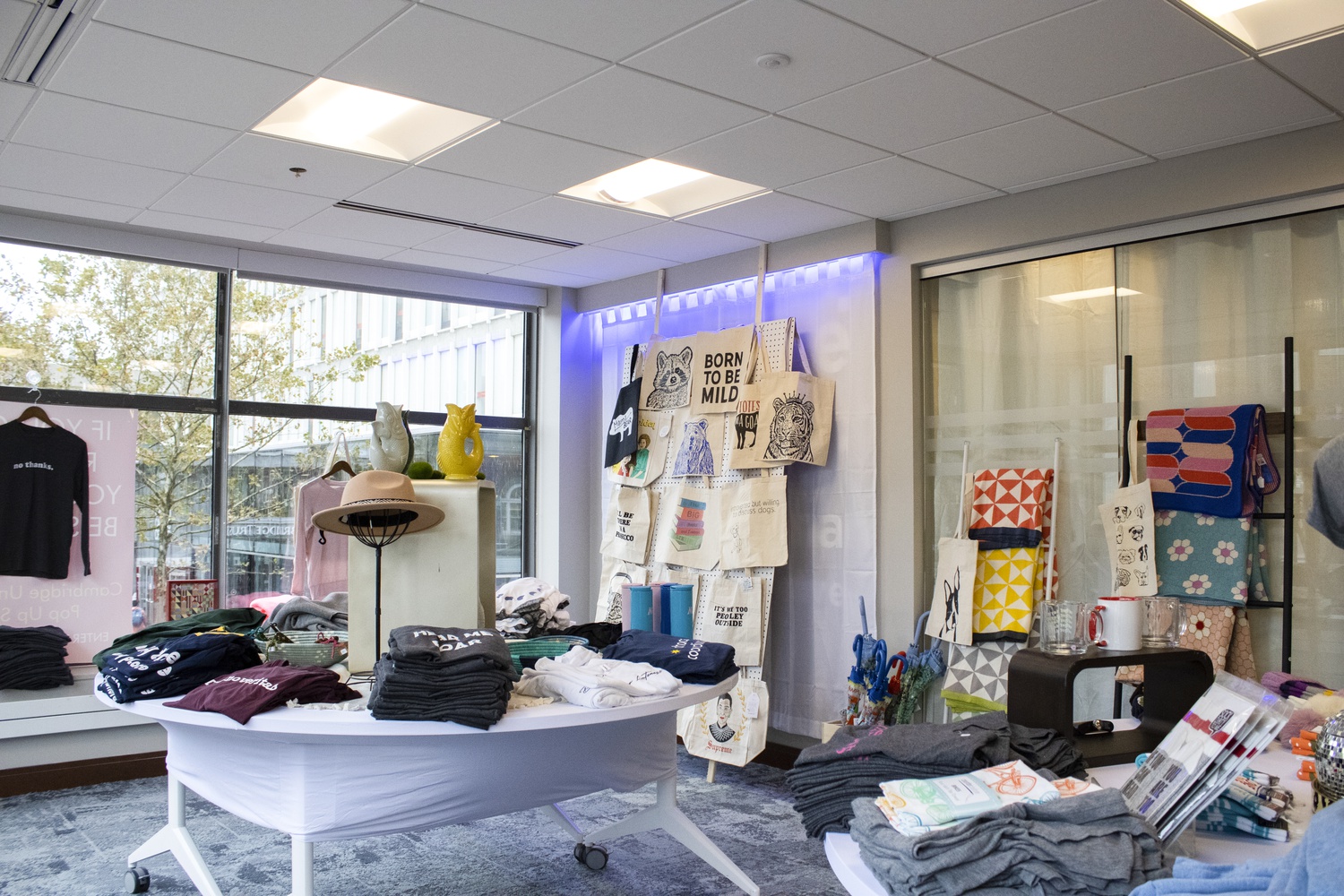 Cambridge Uncommon opened up a pop-up shop on the second floor of the Cambridge Savings Bank building in Harvard Square on Oct. 21. The store will be open until Nov. 4. By Angela Dela Cruz
By Tracy Jiang and Davin W. Shi, Crimson Staff Writers

Cambridge Uncommon, a local e-commerce start-up, opened its first ever pop-up shop on the second floor of the Cambridge Savings Bank building on Oct. 21.

Cambridge Uncommon sells “uncommon goods” with a focus on apparel, though the store also sells housewares and accessories, according to co-owner Nicola H. Wodlinger.

Wodlinger and fellow co-owner Jessica Good grew up near Cambridge Common and have known each other since they were four. The pair chose to open their first store in Harvard Square because of their familiarity with the location and the customer base.

“Cambridge Uncommon is designed to be a store where you can find something that will make you smile,” Wodlinger said. “Or someone will ask you, ‘Hey, where did you get that?’”

Good added that one of the main reasons they chose to open Cambridge Uncommon was to “put a smile on people’s faces.”

“After last year, I think everyone needs a little bit of happy in their life, and we feel like we’re bringing it to the people of Cambridge,” she said.

The pop-up store’s opening coincided with the Head of the Charles Regatta.

“We were crazy busy during the Head of the Charles, which we were hoping for because we are familiar with the Head of the Charles,” Wodlinger said. “We didn’t know if being on the second floor and having to go into a bank was a little bit like a speakeasy kind of store situation, but people found us and have been so nice and so welcoming.”

“It’s been really amazing,” she added. “The customers in Cambridge and Harvard Square are just wonderful, really supportive, really positive, and really love the store.”

Denise A. Jillson, executive director of the Harvard Square Business Association, said Good reached out to her a few weeks ago for assistance in finding a space for the pop-up store. She said Daniel E. Fraine, senior vice president for facilities at the Cambridge Savings Bank, offered Good and Wodlinger a space above the bank for their venture.

“It’s just another example of local people working together,” Jillson said. “From a big bank to a tiny little pop-up, they’re making it work for the benefit of the Square. It’s just wonderful.”

“One more fun opportunity in the Square for people to show up,” she added.