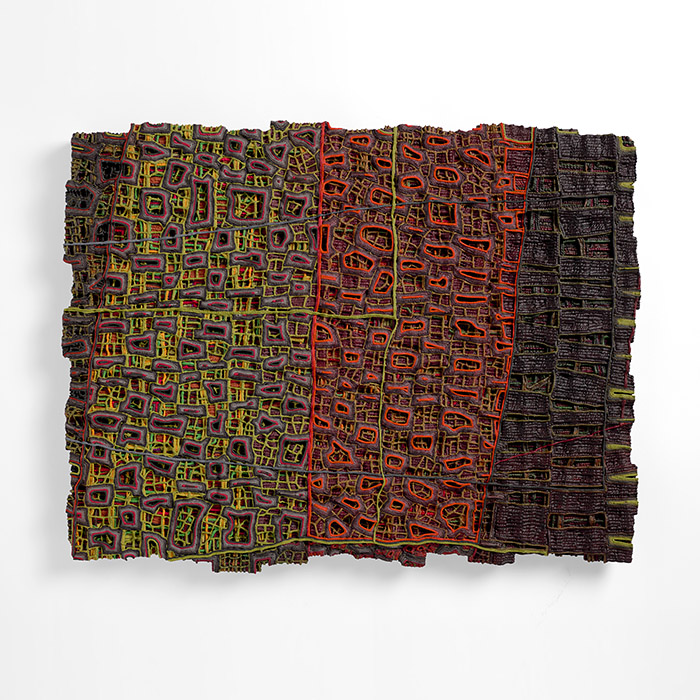 Editors' Note: The Kingston Gallery is open by appointment only due to COVID-19.

In mathematics, a “half-space” is defined as “either of the two parts into which a plane divides the three-dimensional Euclidean space.” Artist Erica Licea-Kane eloquently re-words the concept as “a mathematical term for checkerboarding,” which serves as the basis for her exhibit “Half Spaces” that was — prior to the pandemic — scheduled to show from Mar. 6 to Mar. 29 at the Kingston Gallery in the SoWa district of Boston.

Featuring five pieces and one diptych, the body of work resembles a collection of aerial urban views: while they look flat from afar, a closer look reveals their elaborate physical and visual texture. Licea-Kane’s artistic process starts with hardboards, or wood canvases, to which she affixes squares of balsa wood emblazoned with designs. The balsa serves as the understructure of the work, upon which she adds surfaces, realized by squeezing acrylic pigment out of a pastry bag.

The most basic unit of the pigment surfaces is the globule, and what makes “Half Spaces” so textured are the varied ways in which each globule interacts with those surrounding it. Some gather into a whole aggregate of globules, while others line up into groups of five to six to make small segments; some form into longer lines that span a whole work, and some into bounded boxes and polygons. Each of these collectives has its own set of interactions resulting in more sets of collectives. In this way, Licea-Kane plays with the relationship between individual unit and collective, where the former is one, but the latter is many. It urges viewers to think about this relationship more tenuously, where ideas of individuality and the threshold of collectivity are fluid. The works investigate the point at which the unit loses its individuality and becomes defined by something larger than itself, the point at which one system of collectives becomes more salient than another, as well as the point at which a collective form sheds the characteristics of the parts that make it up. Through the use of the pastry-bag-pigment technique as an operation, the works start with a definable unit that then grows to entertain an infinite number of forms and possibilities.

We can see the pieces as deconstructing the micro-macro dichotomy. There are not just two distinct scales of viewership, but rather a hundred different ways that can be seen at a hundred different distances from it. At the smallest level is the globule. At the largest is the whole piece. Just under that may be the grid system, evident in “Every Other,” or a singular element that traverses the whole work, like the orange line in “Up Over and Around.” Even as there may be controversy around which elements of a piece take on each distinct level along the microscopic to macroscopic spectrum, the works succeed in epitomizing the spectrum itself.

This lens of a macro-micro spectrum can guide analysis of the work, particularly for the concept of boundary. At the macro-level, the balsa squares are not positioned onto the hardwood canvas to create a neat four-sided rectangle, but are instead uneven and jut out from the canvas. Looking deeper, while some works take on a more orderly logic through rectilinear boundaries of color or pattern, others take on a levity through more irregular and curved sections like in “Just Under the Surface.” Approaching the micro-level, the concept of boundary is explored in the formation of lines, where the thickness, overlap or lack thereof, and gathering of lines onto each other relay different levels of rigor to the borders, as well as through the formation of color, where colors blend, accumulate, neutralize, or clash.

Licea-Kane plays with the concept of surface in a similar way. There are so many different layerings of pigment — and so many different pigment-pigment interactions in each layer — that the different surfaces of the work are difficult to cleanly separate. Still, there are surfaces that take a place closer to the foreground and those that are closer to the background, and in this way, the viewer obtains a sense of depth. For example, in “Squares in Fern,” there is a system of bounded boxes, each of which comprises an opening that one can peer into and see a multitude of deeper and deeper linear networks. The works play with hiding and revealing this depth, doing the former through excessive layering and parallel linework, and the latter through openings, which are sometimes broad rectilinear forms like in “Up Over and Around,” or open-top mounds like in “Checkerboard.”

Besides looking like top-down maps, “Half Spaces” also resembles textiles in many ways. The lines and edges of the pieces approximate weaving, the rectilinear sectioning parallels the inherent grids in fabrics, and we see similar practices of layering, visual and color transparencies, and a competition for attention. In fact, Licea-Kane spent her undergraduate and graduate years studying fine art textile. Through “Half Spaces,” she departs from textiles but draws heavily from them as she uses a different medium to bring new insight to the shared concepts. Through her works that are at once bounded and disordered, Licea-Kane simultaneously brings parts forward and pushes them away. She holds central the ambiguity of the individual, collective, boundaries, and surfaces — the ambiguity of space.