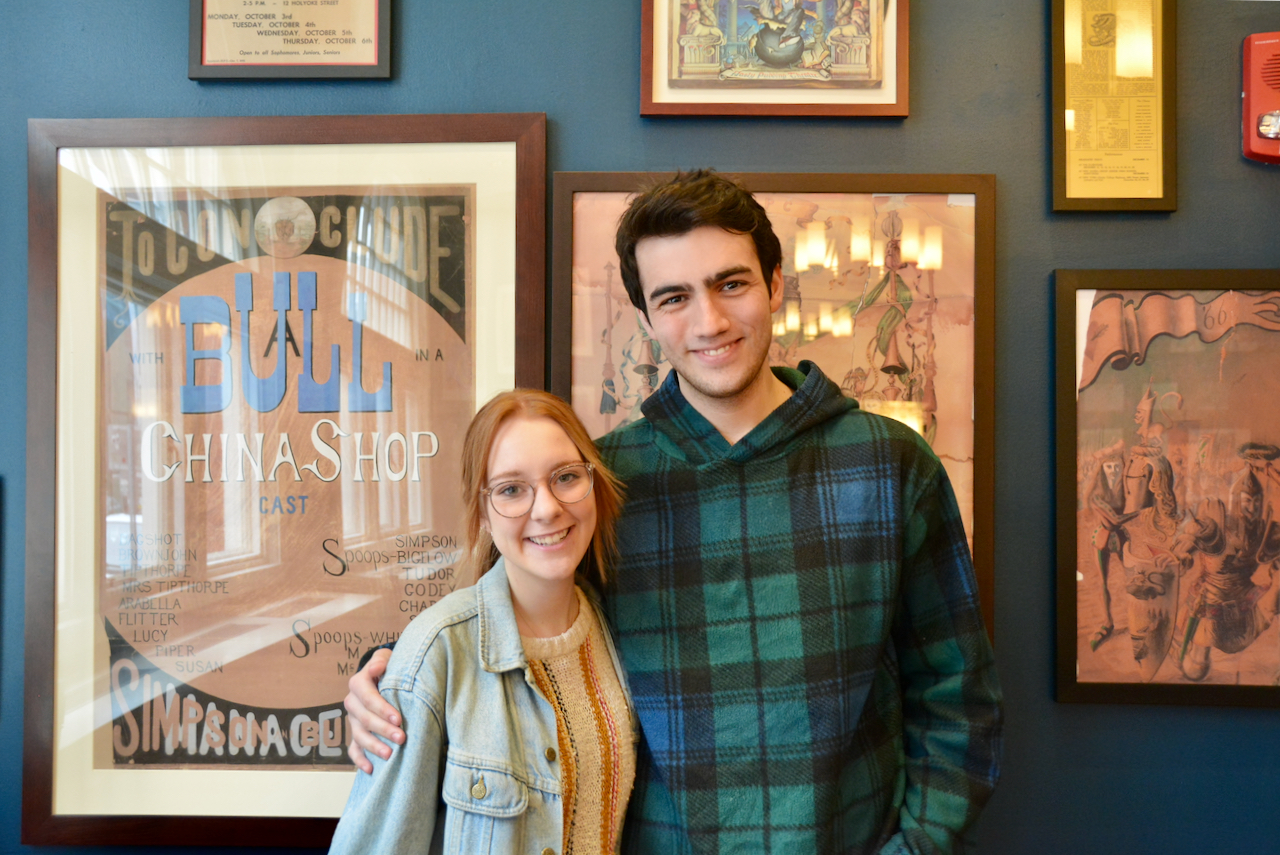 As The Hasty Pudding Theatricals’ annual spring show “Mean Ghouls” enters its final week of performances, The Harvard Crimson sat down with playwrights Jessica M. Moore ’21 and Jakob L. Gilbert ’21 to learn more about the process of creating the show.

The Harvard Crimson: How did each of you first get involved in comedy at home and at Harvard?

Jessica M. Moore: I was not into comedy when I first started here. I was a pre-med, very strict, “A type” personality and I fell into the Pudding by chance through comping the tech crew — and so I’ve been on the tech crew with the Pudding for the past two years.

Jakob L. Gilbert: I didn’t know I was into comedy back home, I don’t think. But looking back on it I think I was, in a way where I didn’t realize it. And then I came here and I studied Computer Science for, like, a year-and-a-half. I auditioned for some improv troupes. I wasn’t involved in the Pudding until Jess and I started writing the show. But yeah, [it was] mostly improv and I started writing for [a semi-secret Sorrento Square social organization which used to occasionally publish a so-called humor magazine] as well.

THC: What does the process of writing, producing, and staging [the annual show] look like from start to finish?

JMM: We start with the script, lyric, and composer competitions that begin the end of May, and those run through July. In our case, we wrote a show and, once we won, they very politely asked us to start over.

JLG: The show that we wrote for the script comp — which we’re very proud of, it’s a very silly show — was unfortunately nixed because the setting was too similar to HPT 170. The show was called “Gone With The Gin,” and it took place in prohibition era Chicago.

THC: How did you come up with “Mean Ghouls”?

JLG: It’s fascinating because I think the vast majority of Pudding shows are built based on historical events. We had to do a lot of world-building because it’s completely fantasy, which was so, so fun. How did we come up with it? We sort of took a bunch of high school movies and Transylvania tropes and mashed them together. And we went through so many revisions, like at least eight different full plots, which was really, really crazy.

JMM: I think one thing that the Pudding is built upon is archetypes. The idea is that the characters, you know them the instant you see them on stage. It’s not crazy inventive. The plots feel like plots that you’ve seen before. It’s just finding a combination of common motifs. One thing we always joked about is we had to use a very common Disney movie plot and figure out a way to incorporate that into a show that feels fresh and new and also has depth.

JLG: It’s a really weird writing experience because sometimes Jess would, like, watch a Disney movie and then call me up and be like, “I just had the best idea for the show, because I watched ‘The Little Mermaid.’”

THC: The Hasty Pudding Theatricals recently began accepting female performers. Did that change the dynamic of writing the show? Was that something you kept in mind as you were creating these characters?

JMM: I think something that’s interesting that happened this year that usually doesn’t happen is that usually, in Pudding history, they say we need six male-presenting characters and six female-presenting characters and half of those will be gender-bent. This year there wasn’t a ton of pressure on us to hit that exactly, it was more just like whatever feels most correct for the show. In the casting room we didn’t come in saying “these are the three characters that are going to be played by men and these are the three that are gonna be played by women.” It really just felt like a free space for us to see who really played characters well regardless of gender. There were so many characters where we thought, “this character will be played best by someone of this gender” and we were really surprised, actually. We ended up with the first female majority show in the Pudding’s history. All the opencast spots were taken by women this year.

JLG: I think, in a really positive way, a lot of these traditions have been broken down. We came in this year, and we had heard from so many past writers that it’s difficult to work with the professional adults that we ended up working with, and they were such a pleasure this whole year. We came in and the first thing we heard from them was: This year is different, do what you want with this show.

Pretty much every Pudding show has this love duet in the beginning, and it’s very clear that whichever two characters sing this love duet are going to fall in love by the end. That is the end of the show. We start the show with an unrequited love duet between the main character and someone who is just a huge asshole. And he totally doesn’t see that she’s in love with him, doesn’t care. And then she is in love with him for the whole show — I won’t spoil the end of the show — but, ultimately, does not end up with him, even though, I think, a lot of the alums who came to see the show were positive she would because it’s just 170 years of that.

We also are really proud to have removed certain jokes. There’s a certain number of annual jokes you have to make. We trash Yale for a second. We talk about tenured Harvard professors. There’s this one joke — I never understood the point of it.

JMM: Historically, it came from joking about Radcliffe women and then, as that transition happened [Harvard accepting women], it was joking about Wellesley girls.

JMM: I remember we thought: What is the point of this joke? Where is the humor coming from? This is just a sexist joke that’s a remnant of what this company used to be. Getting rid of that felt really powerful.

And I think the one thing that I’m super proud of that we’ve done is, I think most Pudding shows are big farces and there isn’t really a moral that’s happening in the show. But I feel like we worked really hard to make this show have something that people can take away from it, and that feels really different and new and exciting.

JLG: It was also just really important to us that we had a strong, female character lead played by a female actress. Ellie Shaheen just took that and killed it.

THC: And you [Jessica] are the first woman to write a Hasty Pudding show in what is it? A decade?

JMM: This is the ten-year anniversary! I don’t think I fully understood why that might’ve been the case when I first started writing, but I remember going through the comp and thinking even the relationship that Jake and I have to comedy is a little bit different. I’m definitely much more unsure of myself and need a bit more validation in my jokes and in my writing. I think that’s just an example of how the comedy world is this male-driven space and how uncomfortable it is to be a woman. To be a female comedian is really hard because there are things that you want to joke about that are really funny to you and, you think, to other women, but when you’re pitching that in a space that’s full of men and it doesn’t land then you’re set back a little bit. Even though it’s a great feminine joke.

I think it’s something that needs to change and I think that women need to know that they are funny and there are people that want to laugh at their jokes and there’s space for them in the comedy world. I don’t think anything was uniquely different about me writing the show and being a woman. There were definitely moments where I looked around our production meeting rooms and saw that it was just a handful of women compared to the number of men, but that’s also changing. We’re getting some female professionals into the company. Next year, especially, I hope women are running the show. Not to knock Jake down, but...

JMM: It’s hard to encapsulate the experience in one takeaway. I will say it’s been the most intense writing experience I’ve ever had. It definitely makes me feel like a writer. I came into this seeing myself as a person who writes, and now I see myself as a writer. It taught me a lot about how to work with one person for so long on a project, and how to talk about your opinion and argue for things that you believe in and know what hill to die on.

JGL: That’s such a good point. My theory on comedy, I would hope both of ours, has changed so much. I really don’t know if I ever would have thought, before this process, that it was productive to explain why something is funny. And yet, by the end of it, Jess and I both became so proficient at succinctly saying why something is funny.

JMM: We’ve come a very long way in our writing.

JGL: Jess and I have had such a crazy arc as friends and writers together. It’s been one of the most beautiful relationships I’ve ever had, personally, where we fought and we distanced ourselves from each other and we came back together and just had this crazy, beautifully written but improvised arc between the two of us. It’s been really great. And now we’re best friends.

JMM: And now we’re best friends! I really want to encourage other young women to try to write the show and see it as an opportunity to just explore a new interest. You don’t have to be a writer who’s written a million things. You don’t have to know the Pudding formula. You can just walk into the comp room and start there.