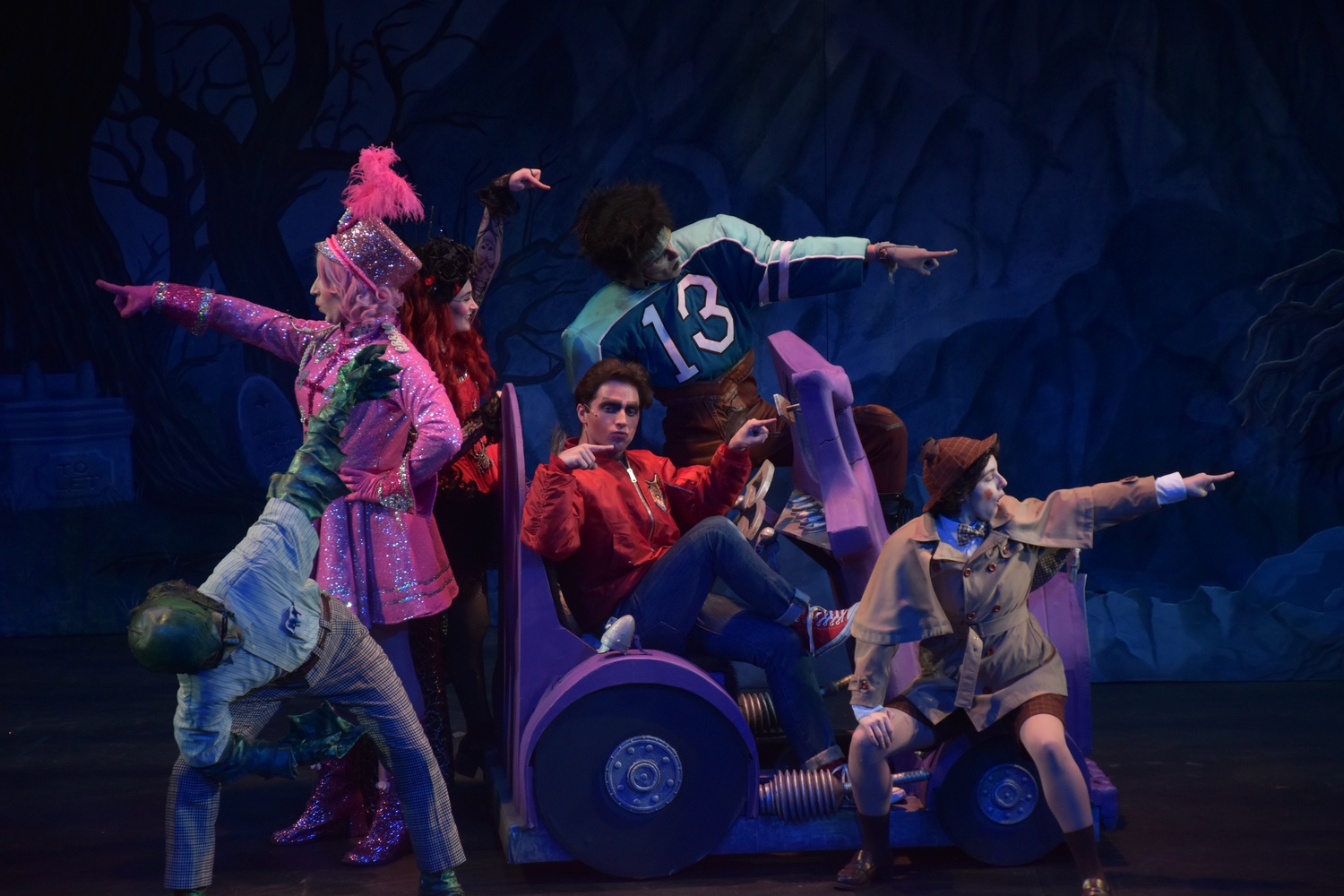 Do you ever find yourself wanting to dress up for Halloween? Did the Halloween party scene from “Mean Girls,” where Cady is the only one to wear a vampire costume, really speak to you? “Mean Ghouls,” the Hasty Pudding Theatricals’ 172nd show — produced by Natalie F. Needle ’21 and Samantha J. Meade ’21 — may just be for you. “Mean Ghouls,” which runs until March 8 in Farkas Hall, tells the story of Mia Ghenstaworld’s (Ellen L. Shaheen ’21) experience navigating high school in Transylvania after her mother, Donna Dedead (Eric J. Cheng ’20), dies and becomes a zombie. Through its tailored script, breathtaking performance, and intricate staging, “Mean Ghouls” builds a mystical world then ruptures it in a mesmerizing act of liberation.

The show opens with Donna Dedead’s funeral procession. Unexpectedly, she comes back to life as a zombie, forcing the family to move somewhere Donna can fit in: Transylvania. Upon arriving at her new school, Hexeter, Mia is caught up in the “new girl in town” trope and shunned by most of her “mean ghoul” peers, including the archetypal mean girl, Megan Duboiscream (David J. Lynch ’20). In an effort to fit in, Mia consults the witch Myra Vengisnigh (Nick L. Amador ‘22) and her henchman Igor Toplease (Scott Kall ’20). Unbeknownst to Mia, she becomes complicit in Myra and Igor’s evil plot against the students of Hexeter and must come to terms with her identity in order to save everyone.

Writers Jessica M. Moore ’21 and Jakob L. Gilbert ’21 use comedy and character development to advance a logical narrative — once you look past the whole mom-coming-back-to-life-in-Transylvania thing, of course. Their script animates the characters, whose diverse personalities drive the show forward. Each character is given a few seconds in the spotlight through a fourth-wall break, an innovative way to introduce each character quickly and clearly. The nature of each introduction is random — sometimes it is a sound, as when the alcoholic Eureka Booze (Molly R. Peterson ’21) burps, and other times it is a self-promoting slogan, like when ghostbuster Hugh’s (Celia K. Kenney ’20) says “I’ve been busting ghouls since before I could walk.” These seconds of individuality keep the show from boxing in any of the characters, giving them room to grow..

The cast does an exceptional job pushing past these introductions and inhabiting their characters. Shaheen embodies Mia’s sheltered personality while also capturing her enthusiasm for a new life in Transylvania. She brings out these tensions through her songs: “Brave New World” highlights Mia’s loneliness and desire for a fresh start, while “Driving Me Wild” illuminates her feelings for Jason in abundant, vehicular sexual innuendo and “Blessing in Disguise” portrays Mia practicing radical acceptance. Likewise, Cheng consistently advances Donna Dedead’s identity as a gag character through constant shaking, sticking his rear end out at an unnatural angle and obsessively patting his fake breasts. Every one of his movements is decisive and on-brand.

This decisiveness goes beyond character development and manifests itself in the show’s staging. It opens with an upbeat, trumpet-heavy piece accompanied by stark red light on the curtains. When the band changes to a more contemplative and gentle tone, the light changes to blue, and as the band shifts back to emphasizing the trumpets and adds more percussion, the lights go back to their previous red, and then even redder. These first few minutes establish the centrality of light-music synchrony to the vocabulary of the musical. Likewise, the set and the lighting inform and illuminate each other. When we see Igor and Myra brewing a potion, the perspective of the brick column backdrop situates us a mile underground. The space changes between sharp green and neon blue undertones. As Mia comes over for a taste, the lights violently flash a myriad of colors that immerse us in her devilish transition.

While hammering down the show’s aesthetic, the team behind “Mean Ghouls” also keeps a firm grip over the narrative. They maintain the delicate balance between the main plot, which revolves around Mia, and the show’s various subplots. While the show could have ended when everyone finally reconciles with each other and rejoices at their Last Day of October Dance, the production instead abandons all narrative and proceeds to a sequence of dances. The audience becomes immersed in an elegant quartet ballroom dance, werewolf Jason’s (Ryan T. Kapur ’20) solo set to Clair de Lune, and a kickline dance finale with the whole cast dressed in bizarre purple cat-cheerleader costumes. We are liberated, all exploding into a surreal world even more unusual than Transylvania. In choosing this end, “Mean Ghouls” opens itself up to more possibilities. Instead of feeling abandoned in the Underworld with the undead, you’ll leave Farkas Hall feeling like you are floating.