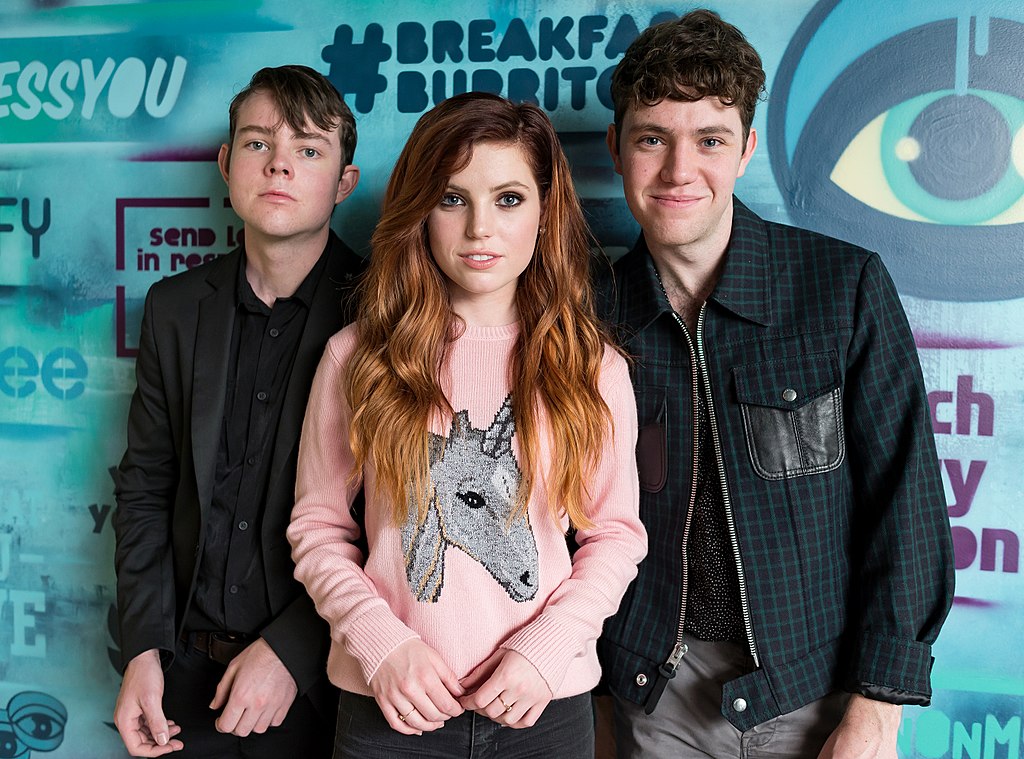 Echosmith as a trio in 2017. By Courtesy of Justin Higuchi/Wikimedia Commons
By Iris M. Lewis, Crimson Staff Writer

After a seven year break, the multi-platinum pop group Echosmith is back with their sophomore album, “Lonely Generation.” The band found fame in 2013 with hit single “Cool Kids.” At the time, singer Sydney G. Sierota was a high school sophomore. Now she’s 22 and married. The Crimson sat down with Sierota to talk about what’s changed, what’s stayed the same, and what inspires Echosmith almost a decade later.

The Harvard Crimson: It seems like you focus on isolation in both "Cool Kids" and "Lonely Generation." Is writing about loneliness different now than it was seven years ago?

Sydney G. Sierota: I would say, unfortunately, it's become more relevant now than it ever has been. Social media did exist when "Cool Kids” was written, but it wasn't as big of a deal as it is now. I literally don't know a single person who doesn't have social media. That's pretty crazy. When "Cool Kids" was written, I knew plenty of people who didn't have it yet. I was still a sophomore in high school. Life has changed so much in the past seven years, and I think the importance of social media has really hurt our generation. We're all so caught up in what other people think about us, and in presenting a perfect version of ourselves… But that's not reality. I think it's really pulled us away from being authentic and true to who we are — which is what "Cool Kids" is about, at the end of the day.

THC: How do you balance needing to use social media for your brand with that skepticism about loneliness?

SGS: It's hard to find a balance between both. Obviously, with what I do, it's really important that we're on social media, that we're active on there and responding to as many fans as we can. We love getting to talk to our fans and interact no matter where we are…. But I try to limit myself in a personal way from scrolling too much. My screen time is way too high right now. I'm trying to find the balance between seeing what's going on, in a healthy way, and then stopping myself before I start comparing myself to this perfectly edited version of somebody.

THC: A lot of the buzz around this album has been about social media. Is that the element of the album you're most excited about?

SGS: There's a lot of themes and feelings inside of this album. There are a lot that have come from this world of social media, and what does that mean and how do we feel about it. But there's also so many other layers to my life that I got to talk about on this album. I think that's really special, because with the first album I was only 16. Now I'm 22 and I've learned so much more. I'm married. I got to fall in love and experience that firsthand instead of just dreaming about it, watching movies about it, and hoping one day, I could feel that too. So lyrically, we got to really dig in to that part of me. It felt really special to do that. It felt really special to be so vulnerable…. I mean, anybody can really relate to the themes of this album, which are coming of age, finding who you are, and also falling in love and discovering what all that means to you. How does it make you feel — the good, the bad, the in between? The things that are kind of hard to talk about are really important to talk about, too, and that's something we wanted to address on this album.

THC: Those are some heavy topics, and it sounds like they must have taken vulnerability. Was any part of this album especially challenging to make?

SGS: In a personal way, it was very challenging to just be vulnerable, period. In my personal life, even with friends and sometimes even family, I tend to just tell everyone that everything is great, no worries, life is perfect, and I'm good — even when sometimes I'm not. It was really a personal stretch, and a professional stretch, and a creative stretch, to tell myself to be vulnerable and to go there even when it felt scary.… It was definitely hard to push myself to do that, and also to have the guts to actually say, "Okay, let's put that on the album and let anyone and everyone hear it." But I'm really grateful that I did that because I've already got so many messages of people saying that they relate…. That's the perfect response to me being vulnerable, especially when I felt scared to be. It inspired me to just keep doing that — keep digging in deeper to all the different parts of myself and sharing it with whoever needs to hear it.

— Staff writer Iris M. Lewis can be reached at iris.lewis@thecrimson.com.