'All In: The Fight for Democracy' Is a Compelling Tapestry of Voting Rights History, But Tears at the Seams 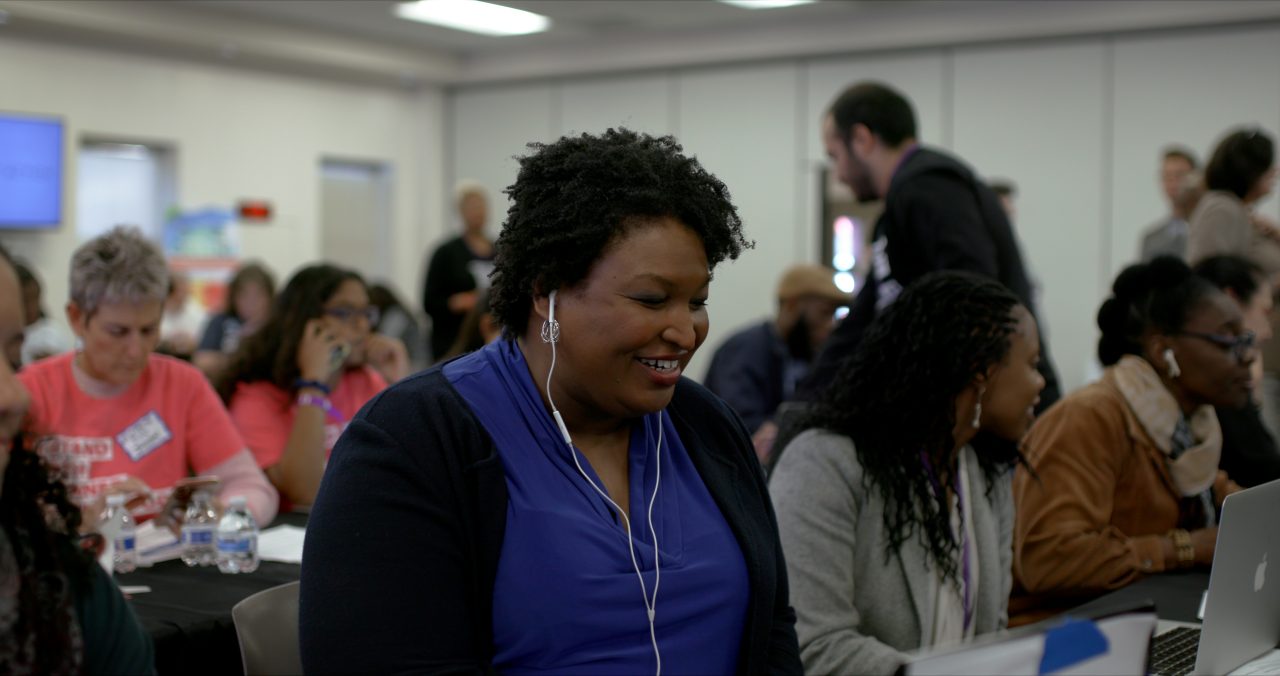 Stacey Abrams in "All In: The Fight for Democracy" (2020), directed by Liz Garbus and Lisa Cortes. By Courtesy of Amazon Studios
By Nuri Bhuiyan, Crimson Staff Writer

In “All In: The Fight for Democracy,” filmmakers Liz Garbus and Lisa Cortes center on Stacey Abrams, the first Black woman to be a major party’s nominee for Georgia governor. Her battle and fraught election against Brian Kemp in Georgia’s 2018 gubernatorial election becomes the lens “All In” uses to study the history of voter discrimination in the United States. Garbus and Cortes collate personal accounts and shared memory to tell a sweeping story that at times falls short of its lofty goals.

The documentary features a range of experts who are introduced, effectively, in an opening montage, where they seem to break the fourth wall and talk directly to viewers. They are constants throughout the film, like a cast of characters. These speakers include leading political thinkers, such as Emory Professor of African American Studies Carol Anderson, journalist and author Ari Berman, and former U.S. Ambassador to the United Nations Andrew Young Jr. “All In” uses these speakers to guide viewers through heavy historical material, but they also bring their own tones in delivery, which helps vivify each of their passionate perspectives on the film's themes.

The film covers a lot of ground, touching on key moments in voting history from the era of slavery in the U.S. to voter suppression today. “All In” is roughly split into different chapters to help viewers digest all this commentary. However, as expected with such complex subject matter, Garbus and Cortes struggle to clearly present and neatly contain their topics. This confusion is partially exacerbated by the film's use of transitions, which try to connect events through superimposition of images or word repetition, but none of these choices clearly signals the end of one segment and the beginning of another. For example, Abrams recounting her experience in advocacy at Spelman College is tenuously linked to a sequence around the women’s suffrage movement.

"All In" is also complicated by the sporadic use of various media, such as animation, comics, newspaper clippings, photos, and videos — both black and white and in color. The result is a barrage of tone, from the comedic cartoons to the serious footage of campaign speeches, which serves to overwhelm the viewer rather than inform them. This is evident in a scene of Florida Rights Restoration Coalition member Desmond Meade’s personal memoir that cuts to the infamous Ku Klux Klan film "The Birth of a Nation" to dramatic, but disorienting effect.

Despite these shortcomings, Garbus and Cortes speak directly with contemporary viewers. The film goes in depth into the disappointing results of the Shelby County v. Holder Supreme Court Case of 2013, which overturned part of the Voting Rights Act and allowed for the revival of racist tropes like required stricter forms of ID that disproportionately impact BIPOC. It finishes with the 2020 primaries and Black Lives Matter protests. The result is powerful: Viewers feel like they are part of a movement bigger than themselves, and bigger than their generation.

In the end, "All In" serves as a riveting last call to go to the polls. While it may be too ambitious in its attempt to cram centuries of history into a 100 minute film, it still succeeds in weaving a compelling tapestry of the struggle for minority voting rights. The result is a reminder that viewers need to respect the battles fought hundreds of years before them, and carry them forward.