‘The Deviant’s War’: A Portrait of the Activist as a Young Man 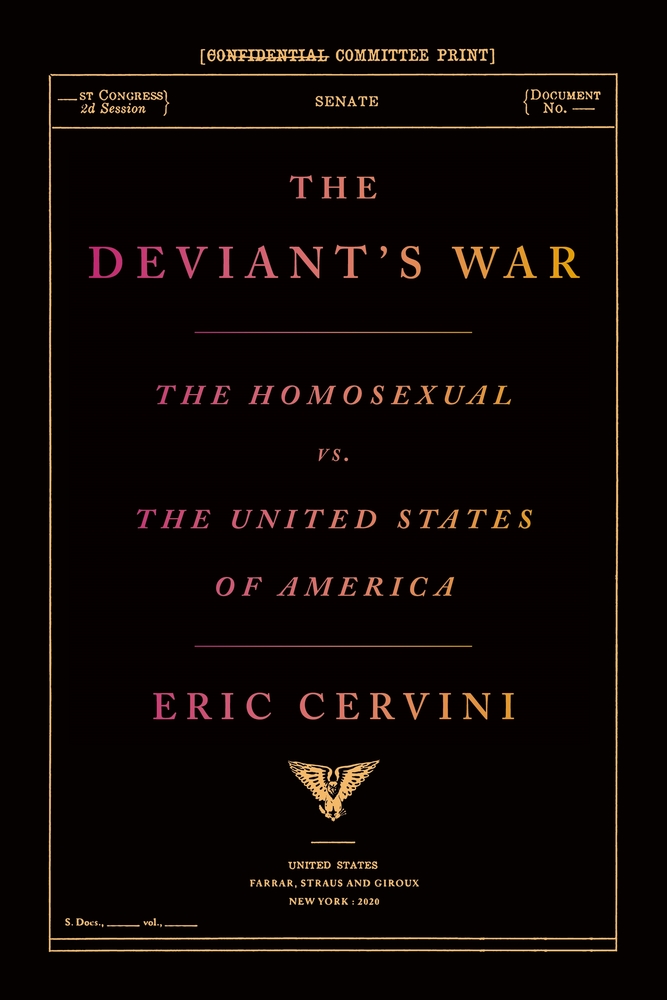 Cover art for "The Deviant's War: The Homosexual vs. The United States of America." By Courtesy of Macmillan Publishing
By Mira-Rose J. Kingsbury Lee, Contributing Writer

In his literary debut, Eric M. Cervini ’14 offers a history of the American gay rights movement in which the Stonewall Riots and the AIDS epidemic –– arguably its two most widely-known events –– are mere footnotes. Instead he focuses on an unsung hero, of which the movement has nearly as many as it has martyrs. Cervini’s hero of choice is Dr. Franklin E. Kameny, a Harvard-educated astronomer fired amid the 1950s space craze for refusing to deny his homosexuality. Anyone wishing to be informed on gay life in Washington, D.C. and the seemingly endless deluge of court cases for gay rights in America should look no further. The rest should proceed with an open mind.

For a majority of readers, tedious and largely unsuccessful court cases are hardly the stuff of page-turners. Fortunately, Cervini has done very well at letting Kameny’s writings (pulled from his cache of 40,000 personal documents) speak for themselves. Though some parts are inevitably dry, the rapid pace of events ensures that a matter of interest will soon arise.

Though “The Deviant’s War” is engaging, it is also at times difficult to follow; the cast is numerous and Cervini has done his best to include as many people as possible. This is fine for establishing a wider view of gay Washington, but after some 400 pages of flitting between briefly-established side characters, the less discerning reader begins to lose track. Some characters given three pages here deserve (and sometimes have) their own biographies, among them Sylvia Rivera, Marsha P. Johnson, and other icons of the Stonewall legend.

Others, like the FBI informant Warren Scarberry, are given relatively little of the spotlight, yet seem to deserve more. (Scarberry killed a man. The incident is granted a few paragraphs before Cervini’s focus shifts to the 1845 New York rent protests.) Most elusive and perhaps most intriguing is Kameny’s mother, who appears for only a few lines here and there, yet is described as having “support[ed] her son and the movement until she passed away at the age of one hundred.” In a historic movement where a mother’s unwavering support seemed a rare phenomenon, Cervini’s skipping-over of Kameny’s mother is surprising and a touch disappointing.

In every historical recounting of a movement as large and varied as the gay rights movement, choices must be made about who to include, and many names must be set aside. This particular account, because it focuses on the male-dominated Mattachine Society of Washington, neglects many of the women behind the movement. Cervini is quick to address the issue directly, and makes a few attempts at remedying the imbalance. Yet nearly all the women in “The Deviant’s War” are given introductions a little too cursory for the amount of references to them. Lilli Vincenz, the first lesbian member of the MSW, is a consistent voice behind Kameny throughout the book, but we ultimately know much less about her than we do about Bob Martin, who occupies a similar status.

Cervini paints Kameny as a sort of Alexander Hamilton of the gay pride movement: essential, brilliant, but somewhat unlikeable. An obsession with a strict dress code, a tendency to be the loudest person in the room, aggression even toward his fellow activists, “rare moment[s] of contrition” –– Cervini depicts all of Kameny’s flaws along with his achievements. It is an unflinchingly honest portrait of the man, which, rather than lessening our empathy towards him, serves to heighten it.

Kameny’s beloved Mattachine Society of Washington fell apart at the end of 1971 with the birth of the Gay Activists Alliance of Washington. It is fitting that in 2011, the year he died, the MSW was revived as the New Mattachine Society of Washington D.C. (MSDC). Its manifesto promises to “ensure that the LGBTQ+ Community’s history is preserved and disseminated far and wide so that it cannot be forgotten.” With “The Deviant’s War,” Eric Cervini helps lift Frank Kameny among the unforgettables of the gay rights movement.