How Social Media Drives and Destroys ‘The Bachelorette’ 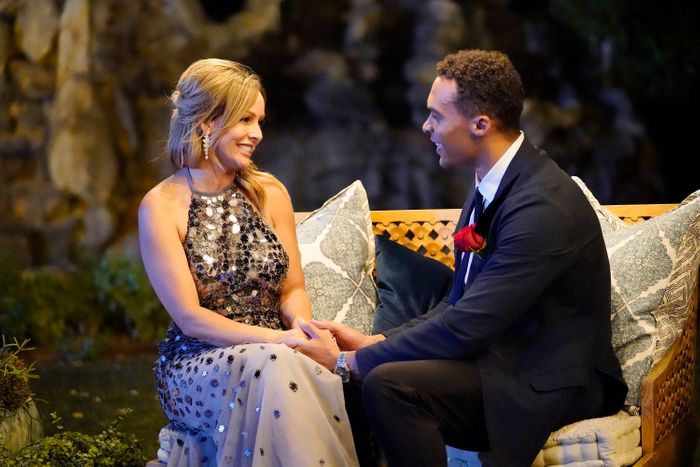 Clare Crawley and Dale Moss in the season premiere of 'The Bachelorette.' By Courtesy of Craig Sjodin/ABC
By Julia R. Kennish, Crimson Staff Writer

This past Tuesday marked the premiere of the 16th season of “The Bachelorette,” a show known for absurd displays of masculinity and unrealistic ideas of true love. Given that this season was filmed and released in the middle of a pandemic, it’s guaranteed to be "unprecedented." But even in any other year, this would be an unusual season.

It’s a season of many firsts. Clare Crawley, at 39 years old, is the oldest Bachelorette in history. Jeremy Higgins, at 40, is the oldest ever contestant. And those that have been following recent news surrounding this franchise would know it’s also the first time a Bachelorette has ever left the show mid-season.

But that’s not much of a spoiler. The entire “Bachelor Nation” has known about this shocking turn for months, and Clare Crawley’s impending replacement is all but explicit in the premiere. In the early days of reality television, the twists and turns and eventual winners of shows were easy to keep under wraps; information didn’t spread on the internet like wildfire. But with each contestant’s Instagram, Twitter, and even Reddit accounts, secrets never last long — which is why the presentation of Crawley’s departure in the season premiere was so disappointing.

The episode starts with a hyper-dramatized trailer of the season ahead, including sound-bites like “I expected way more from the oldest Bachelorette” from one of the contestants” and “You’ve just blown up ‘The Bachelorette’” from host Chris Harrison. The team behind “The Bachelorette” knows that their viewers are aware of Clare’s replacement, but they couldn’t stop themselves from finding the most exciting clips and cutting them together — grasping for a bombshell that no longer exists.

Following the intro, the episode snaps back to the typical “meet the Bachelorette” clips — only this time with a COVID-19 twist. Despite all of the health and safety theater, some of the content of the pandemic intro borders on dangerous misinformation. The contestants are shown receiving their COVID-19 tests, but all of them portrayed the experience as uncomfortable or even painful — probably not something a show should be telling millions of potentially test-skeptical viewers. And when the contestants receive their negative tests, they run around asking if they can get a hug, as if a negative test is the same as immunity.

Once the usual Bachelorette fare begins, the men approach Clare in a variety of attention-grabbing outfits: straight jackets, suits of armour, and a James Bond costume, to name a few. When Clare meets contestant Dale Moss, a former NFL wide-receiver, she says “I definitely feel like I’ve just met my husband,” quite a powerful example of real-life foreshadowing.

Once all the contestants have arrived, Clare talks with most of them one-on-one, sharing a few intimate moments and breaking up a few arguments. The first-impression rose (a prize which automatically qualifies the winner for the next round and indicates the initial front-runner) goes to Dale, naturally, and during the rose ceremony, eight men get the boot.

Unfortunately, the drama is completely lost on the audience. What would have been a real show-stopper of a series twist was leaked months ago, and now audiences are just itching to see Tayshia Adams take over as the Bachelorette.

It’s often hard to understand why people want to be on reality shows. Is the fifteen minutes of fame truly worth the potential national embarrassment? Bachelorette contestants always talk about how noble their intentions are; after all, admitting to being on the show just to gain a few thousand Instagram followers is the fastest way to get the chop. Some of the contestants on “The Bachelorette” may be genuine hopeless romantics, but in recent years, the draw of social media fame is impossible to ignore. Former Bachelorette contestants gain thousands of followers and a few sponsorship deals for their trouble. In addition, there is something to be said for wanting to earn a spot on a show with an unspoken minimum attractiveness threshold, thus showing yourself off as a catch. And for the Bachelorette herself, dating over thirty men at a time that are all fawning over you might sound like a blast.

Everything about “The Bachelorette” is driven by social media. Fans follow the contestants, all of whom have “Bachelorette season 26348” in their bios, which only makes more people want to be on the show, and further engages the audience outside the episodes. But, unfortunately, social media is also responsible for ruining this season entirely. All the dramatics surrounding it have been spoiled beyond repair, and when you remove unexpected drama from a reality show, you don’t have much left.