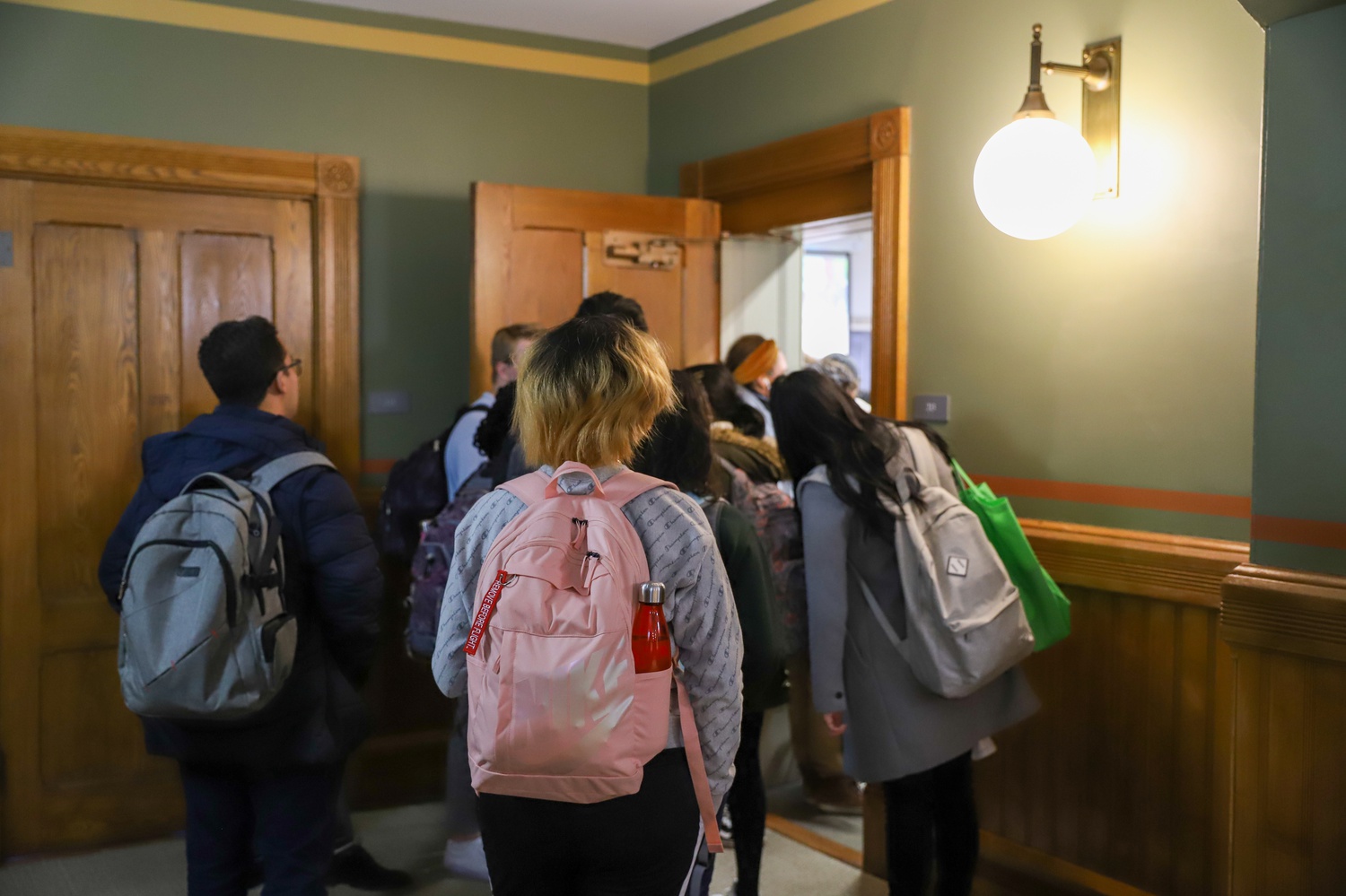 During shopping week, students overflowed into the hallways of Sever Hall, as they attempted to shop GENED 1142. By Ryan N. Gajarawala
By Kevin R. Chen and Juliet E. Isselbacher, Crimson Staff Writers

The College’s new enrollment system for its required General Education program rolled out this week to mixed reviews.

In previous semesters, many instructors teaching Gen Ed courses conducted independent lotteries to keep their course enrollment below capacity. But this spring, the Gen Ed office piloted a new coordinated lottery system, asking students to rank all their Gen Ed course choices and seek enrollment through a centralized randomization process.

The Gen Ed office began developing the coordinated lottery system in collaboration with several other University offices after noticing that some students successfully lotteried into many Gen Ed courses while others only lotteried into one.

“You told us that the lottery system was too confusing, too uncoordinated, and too stressful. We listened,” the Gen Ed office’s website states.

Some students said they were pleased with the new system.

“I lotteried into five classes and so far I’ve gotten four of the five I wanted,” Haneul H. Shin ’23 said. “It seems to work pretty well.”

Others said they had little success with the new lottery.

“I applied to four of them and none of them accommodated or let me into that GenEd course,” Brian Ma ’23 said. “I feel like this lottery system is worse than what they did last semester.”

Many experienced difficulties accessing the online course catalog through the my.harvard system Wednesday afternoon — the same day that Gen Ed lottery submissions were due.

Tim Bailey, a spokesperson for Harvard University Information Technology, wrote in an emailed statement that HUIT was aware of the problem.

“HUIT understands the frustration this causes at a critical time for course enrollment, and sincerely apologizes to the Harvard community for the inconvenience,” he wrote.

History professor William C. Kirby — who teaches GENED 1101: “The Business of China” and taught GENED 1136: “Power and Civilization: China” last semester — wrote in an email that he believes the new Gen Ed lottery system is fairer than lotteries held in previous semesters.

“In the past our lotteries struck me as often unfair: not privileging students who had actually preselected a class or those who had been lotteried out of a class in earlier years,” he wrote. “The new GenEd lottery by contrast strikes me as a serious effort to meet the highest priorities of students. I hope it works well.”

Kirby added, however, that he thinks pre-registration for courses would be a better system.

“In the absence of some form of preregistration, which allows for better academic planning, we may never have an ideal system, but colleagues who have planned the new GenEd lottery have given the challenges very careful thought and planning,” he wrote.

In 2018, the Faculty of Arts and Sciences debated a proposal to adopt pre-registration in lieu of shopping week, a period at the beginning of each semester when students may try out courses before officially enrolling. After months of discussion, FAS voted in 2019 to retain shopping week until at least 2022.