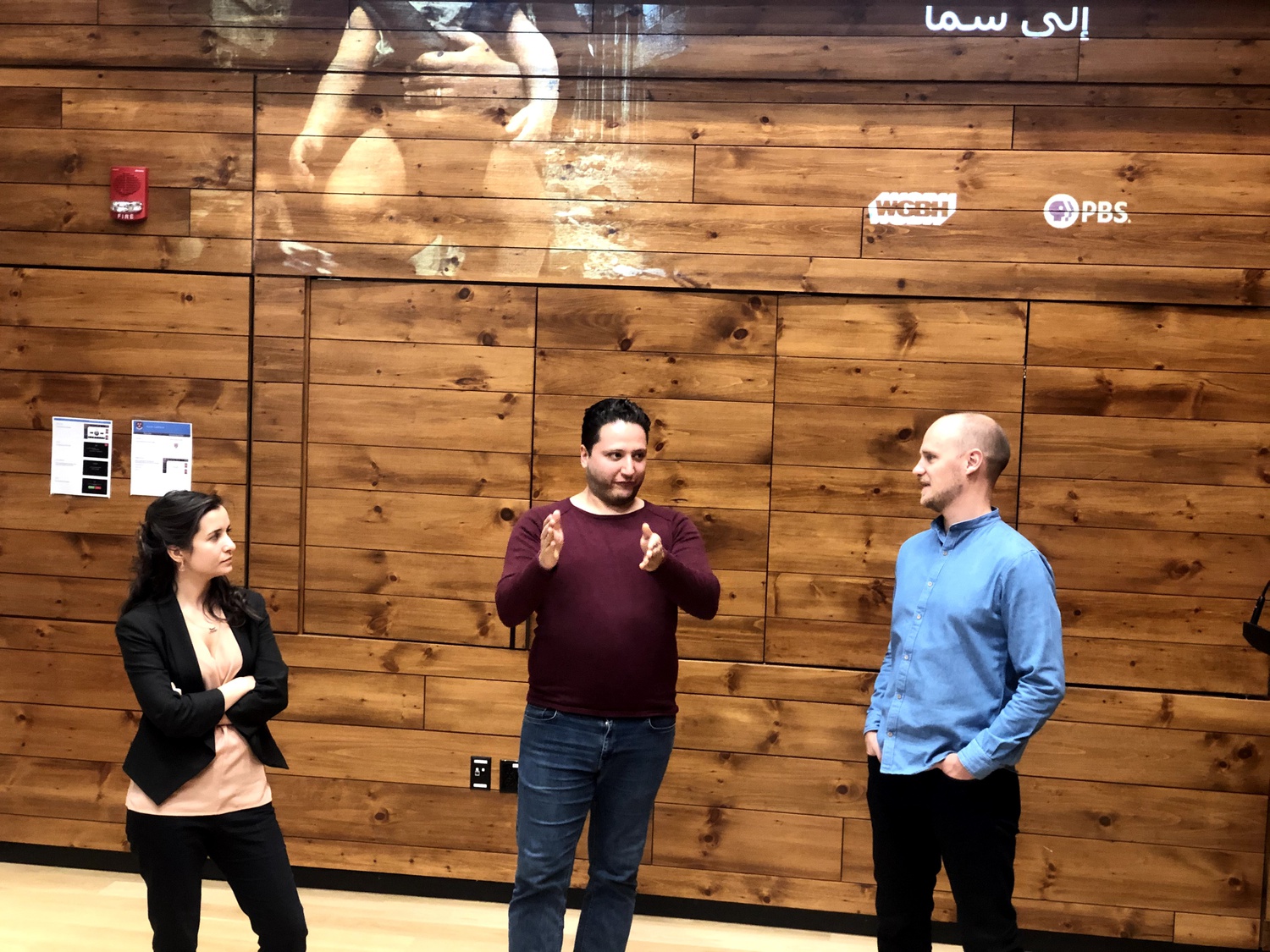 On Nov. 14, Lowell House hosted an event with Waad al-Kateab and Edward Watts, the directors of “For Sama,” which won L'Œil d'or, the Best Documentary award, at the Cannes Film Festival this year. Hamza al-Kateab, Waad’s husband and protagonist in the film, was also in attendance. The film has won no fewer than 20 different awards across several film festivals around the world, including the SXSW 2019 Film Festival and the Nantucket Film Festival, and has given worldwide attention to the ongoing Syrian crisis. A Q&A session followed the screening of the snippet of the film. The Harvard Crimson sat down with Waad al-Kateab and Edward Watts to discuss their experience producing their documentary about the ongoing Syrian crisis through the five years Waad and Hamza spent living in Aleppo.

The Harvard Crimson: When did you start filming? What was the first thing you filmed in Aleppo?

Waad al-Kateab: So, in 2011 when the revolution started, I joined the protests. And it was so easy in Syria to distinguish with which side you want to be because there were normal people protesting, and there was the regime trying to make these people not ask for their human rights. So, it was so obvious that what we needed to do is to record and film these things because the regime was denying everything that was happening on the state media. Like when we were in one protest, you could see the security forces coming, beating people in the street, and killing them sometimes. And then you see the official camera of the state media coming and filming [as if to say,] “Oh, there's nothing happening here. All the videos you've seen were fake.” I started with my mobile phone, as many other activists in the university, and with time, things became bigger and bigger. Every time, there was more violence. We felt that we needed to go through to the background of these things and why they happened. Like, beyond everybody you see. There's family, memories, people, life. You need to capture the full perspective.

THC: When did it come to you mind that this footage could become a film?

WAK: It's never come to my mind! Really, for the full five years — I was just capturing as much as I could. I've worked sometimes in the news, sometimes in small, short documentaries, and all the time we were trying to do our best in very specific symbol things. I couldn't see the full picture when I was inside. So, I was just capturing, and I was pretty sure that — not just me, I think everyone who lived in those circumstances — we were feeling that we could be killed at any moment. We've never planned something for the future. Everything we were trying to do was just for today, maximum tomorrow, but nothing more. I was just like, capture this material every day put it in one hard drive, and just try to continue. If I could have sent three minutes for one of the news programs around the world, that would be amazing. But I never thought, “Oh, I want to do a film about five years, or three years, or whatever.”

Hamza al-Kateab: I think the best thing — and I’ve been, as a doctor there, filmed by several films or long reports news — and it doesn't feel real when there's a script. Like when the cameraman came with the script like, “I want you doctor to walk in the corridor. I want to check the patient. I want you to do this.” What was great about what Waad has done is that she filmed everything and then [tried] to build a story. There is no script written [demanding], “I want a child crying with his mother or something,” but when they wanted to build the story it was like, “Oh, do we have a shot of this? Do we have a clip of that? Do you want to tell another family story?"

EW: I think that is so true. And that's one of the things that makes it so real and authentic. And one of the incredible things about working with Waad was that because she wasn’t necessarily thinking “Okay, this scene is going to go here and this is going to go there,” she filmed so much. You know, so all of this richness of their lives, and of the story of what happened in Syria was gathered together. So, you know, so much of it was there, and there were so many options that we had to bring out different aspects of humanity.

THC: Two types of footage exist in the documentary, journalistic recordings of the conditions and personal videos. For example, you include videos of your daughter and videos of your wedding. How did you feel about merging those two kinds of footage?

WAK: In many places when I start filming, I was like, “Okay, I'm now here, Waad who’s trying to be a filmmaker [strictly] to document.” But in some places, I felt that the camera became part of my life and my body. For example, in the poster itself, there is me, Sama, and the camera. I felt like these three elements changed the whole of my perspectives. And so far, I still see everything as a frame. It was all the time like I was trying to live my life normally as Waad, the mother of Sama, sometimes just the wife, sometimes just the young woman. And then trying to capture these amazing minutes in my life. Which means, for me, that if I couldn't really survive, this is will be protected and no one can deny this. But at the same time, I was trying to be Waad, the journalist, trying to capture real stories. And when we were trying to do the film, it was so obvious that to give people the full perspective, it needed to be a mix between Waad the journalist and Waad the mom. That's what we try to reflect in the film.

THC: When did you start putting these different clips together? When did it become the film?

WAK: So, when the film finishes, the last thing is when we left Aleppo. So, after I left, I was filming the whole five years. I was working in 2016 at Channel Four News in the UK. They have a program every day, and I was sending them some small stories which worked for the news. Because I have a good relationship with them, I went to the UK in February 2017 — it was just one or two months after we left Aleppo. And we were speaking more about doing longer news reports. Then I showed them some of the material that I have — I’ve done with them around 25 reports. We put them all in one website called “Inside Aleppo,” like a series of news reports — so at that time when we felt that this could be a very big project, they introduced me to Edward who worked with them before. I couldn't do the story by myself. I was just left so emotional. I don't have the good experience to do that big project alone.

THC: Now that you have been able to share your film with the world, what’s next?

WAK: So, for the situation itself: This is still happening now. And I'm so happy to be a filmmaker and to do more films. But for me, I’m here just because of what I went through, because of a cause which I truly believe in. So I will try in my personal future — and with the experience that I have now, and with lots of good things which I'm now getting — to continue to do more stuff about Syria, because there are thousands of hundreds of stories to be told. The film itself now is doing very well around the world. So, what we are trying to do is to use it as a tool to shed light on what's happening in Syria right now. The impact campaign we're trying to do, which is “Action for Sama,” is focusing on the situation right now in Syria, about the attacks on hospitals and health facilities, which is happening a lot now. So, we work with many partners located in the U.S. and in the U.K. — one of them is Physicians for Human Rights. So, I think I still feel that there's a lot of work to do — all the details of what's happening in Syria, for accountability, for justice.

Lowell House is planning to have a full screening of “For Sama” before the end of this semester so that students can watch the documentary in its entirety.