Computer Science 50 led course enrollment numbers with 724 undergraduates, according to data from the Faculty of Arts and Sciences registrar’s office Thursday.
By Cecilia R. D'Arms and Amy L. Jia 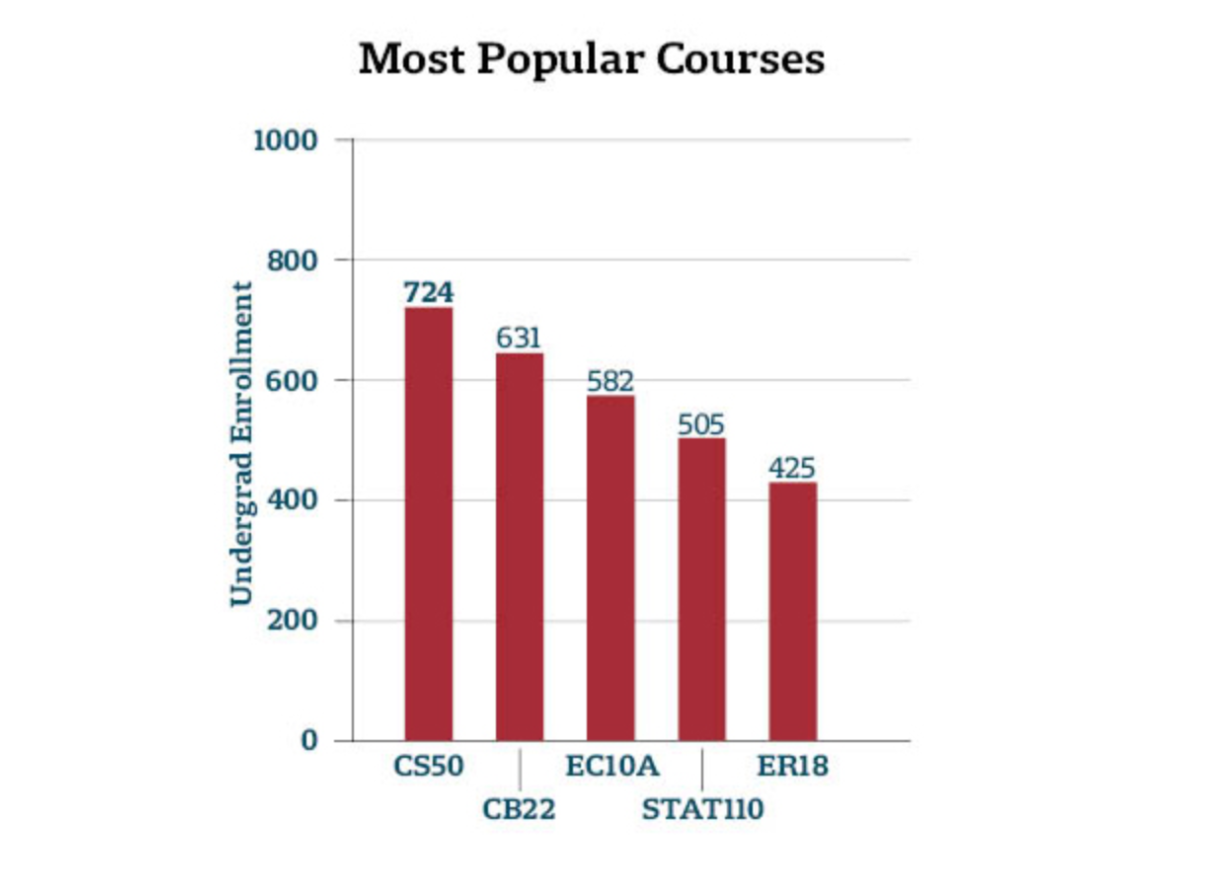 For the first time in three years, Economics 10a: “Principles of Economics,” has ceded its spot as the College’s most sought-after fall class to long-time competitor Computer Science 50: “Introduction to Computer Science” and dark horse Culture and Belief 22: “The Ancient Greek Hero: Mythology and Facing Death.”

Ec10a, the introductory course to the Economics concentration and a prerequisite for most economics classes, dropped to third place behind CS50 — the second most popular course for the past three fall semesters — and CB22, which surged to second place after its enrollment more than doubled from last year.

CS50 led course enrollment numbers with 724 undergraduates, according to data released by the registrar’s office of the Faculty of Arts and Sciences on Thursday — well ahead of the 631 and 582 undergraduates in CB22 and EC10a, respectively. Statistics 110: “Introduction to Probability” and Ethical Reasoning 18: “Classical Chinese Ethical and Political Theory” — which regularly make the top five most popular fall courses among undergraduates — rounded off the list with 505 and 425 students, respectively.

Of these five courses, only CS50 and Stat 110 have significant non-undergraduate enrollment. The total enrollment in CS50, including 51 cross-registered students, is 796.

Comparative Literature Professor Gregory Nagy, who teaches CB 22, said the course’s enrollment hovered around 100 students until two years ago. He said he thinks the course’s addition of a subtitle, “Mythology and Facing Death,” two years ago may be responsible for the rapid increase.

“I’ve always thought that the reason people should learn about ancient Greek heroes is that it teaches us so much about how to live and how death is part of how we live,” Nagy said. “So who knows, maybe it’s the subtitle that has caught the attention of people. We started it last year, and that’s when we had one big jump, and now we’ve had a bigger jump.”

Additionally, CB22 counts for a General Education requirement and 65 percent of fall 2017 students who responded to the course evaluation survey, known as the “Q Guide” — a database where students assess courses and professors — reported that they spent less than three hours working on the class per week.

Economics Professor N. Gregory Mankiw, who has taught Ec10a since 2005, said the course provides an “important foundation” for informed citizenship.

“So many issues that you read about in the news require an understanding of economics to even begin to understand what the right policy is,” Mankiw said.

When Mankiw learned his course had ceded the top spot, however, he said he wasn’t too concerned.

“One thing we teach in economics is that competition is good,” he said.

Several long-standing courses have had to modify their meeting times and curricula this year to accommodate the new course schedule, which extends the length of many courses from 60 to 75 minutes and eliminates “Harvard Time” — a College quirk under which professors began class seven minutes after the official start time.

Computer Science Professor David J. Malan ’99, who teaches CS50, wrote in an email that the teaching staff adjusted the course’s schedule last year in preparation for the new changes.

“Last year, we met weekly for lectures on Fridays, 10am–12pm; this year, we officially meet on Fridays, 9am–11:45am, which is longer, though we won’t always use the entire block,” Malan wrote.

“On days we wrap early, we’ll reserve time at the end for optional discussion and Q&A,” he added.

Nagy said that, thanks to the new course schedule, he extended his class to 75 minutes and was able to add “Songs of Sappho” to CB22, as part of his personal interest in female heroes.

“I’ve been going around saying for a long time that the creativity that goes into, especially, the ‘Iliad’ is not predominantly male. There’s a lot of female art that goes into it,” Nagy said.

—Staff writer Cecilia R. D'Arms can be reached at cecilia.d'arms@thecrimson.com.