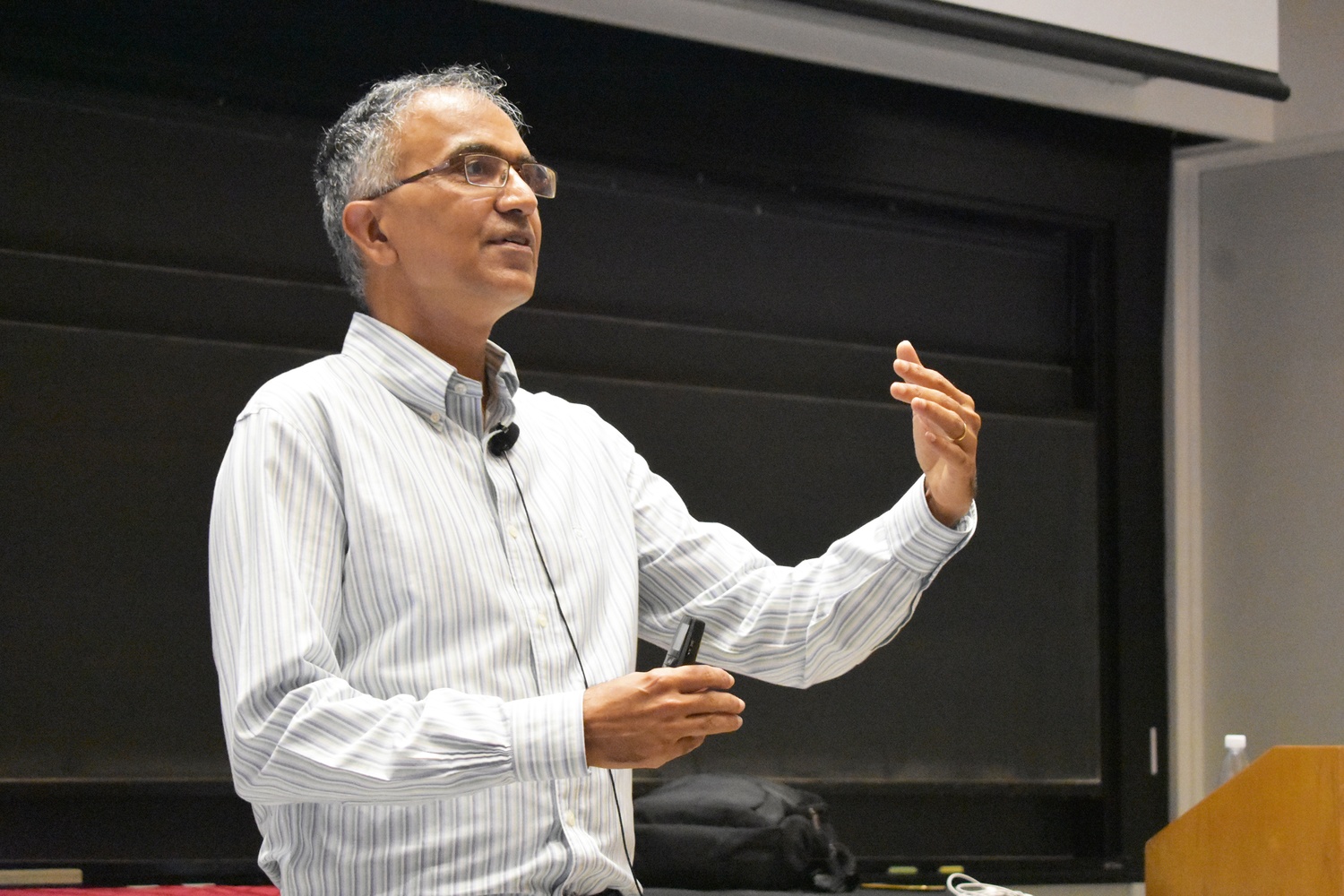 Sanjeev Arora, a two-time winner of the Godel Prize for his contributions to theoretical computer science, is stopping through Cambridge to speak to Harvard affiliates as part of the two-day Ahlfors lecture series, an annual event hosted by the University's math department.

During his first lecture, Arora introduced the fundamental concepts of machine learning. In his second lecture Wednesday, he explored the mathematics behind deep learning, a type of machine learning that uses “nonlinear, multilayer models."

He explained that machine learning can be used to accomplish tasks such as sentence completion, simply by associating each word with a vector that represents its meaning.

“It must implicitly pick up on grammar — the next word is going to be a noun — and common sense," Arora said. "You don’t order a puppy at a cafe."

The Ahlfors lecture series is held in honor of late Harvard math professor Lars V. Ahlfors, who won the first Fields Medal in 1936 — an award often considered to be the mathematical equivalent of the Nobel Prize — and the prestigious Wolf Prize in 1981.

Ahlfors was renowned for his work on complex analysis, the study of the functions of numbers that have both real and imaginary components. Complex analysis has applications in fields ranging from physics to number theory to engineering. Ahlfors published the leading textbook on the subject in 1953, as well as numerous books and papers throughout his career.

“He was one of the masters of Complex Analysis in the 20th century, the same field that drew me into mathematics and where my research continues today,” Math Department Chair Curtis T. McMullen wrote in an email. “When I arrived at Harvard myself, as a grad student in 1981, the first mailbox was labeled ‘Ahlfors’ and the last one ‘Zariski’ — the great masters of Analysis and Algebraic Geometry framed the department.”

Math professor Horng-Tzer Yau, who organized this year’s program in concert with math professor Shing-Tung Yau, said Ahlfors was a “natural candidate” to be honored through the lecture series, both for his lifetime accolades and his work on complex analysis and Riemann surfaces.

According to Horng-Tzer Yau, the lecture series has a nearly decade-long history, with the inaugural lecture taking place in 2009. Past speakers have included mathematician Peter Lax, who made groundbreaking contributions to the fields of pure and applied mathematics, and Jean Bourgain, the 1994 recipient of the Fields Medal.

“The first criterion [in selecting a speaker for the lecture series] is he has to do excellent mathematical work — either it’s a recent breakthrough, or it’s an important direction,” Horng-Tzer Yau said. “Then, we cover directions in both pure and applied mathematics.”

Horng-Tzer Yau said Arora is one of a small handful scholars today who “put systematic effort to understand deep learning in a mathematical way.” He said he wanted attendees to experience firsthand how the Princeton academic sees the problems of machine learning and how Arora thinks about turning that thinking and learning into mathematics.

“The emphasis is that we want to tell students that mathematics can be applied in many, many ways,” Horng-Tzer Yau said.