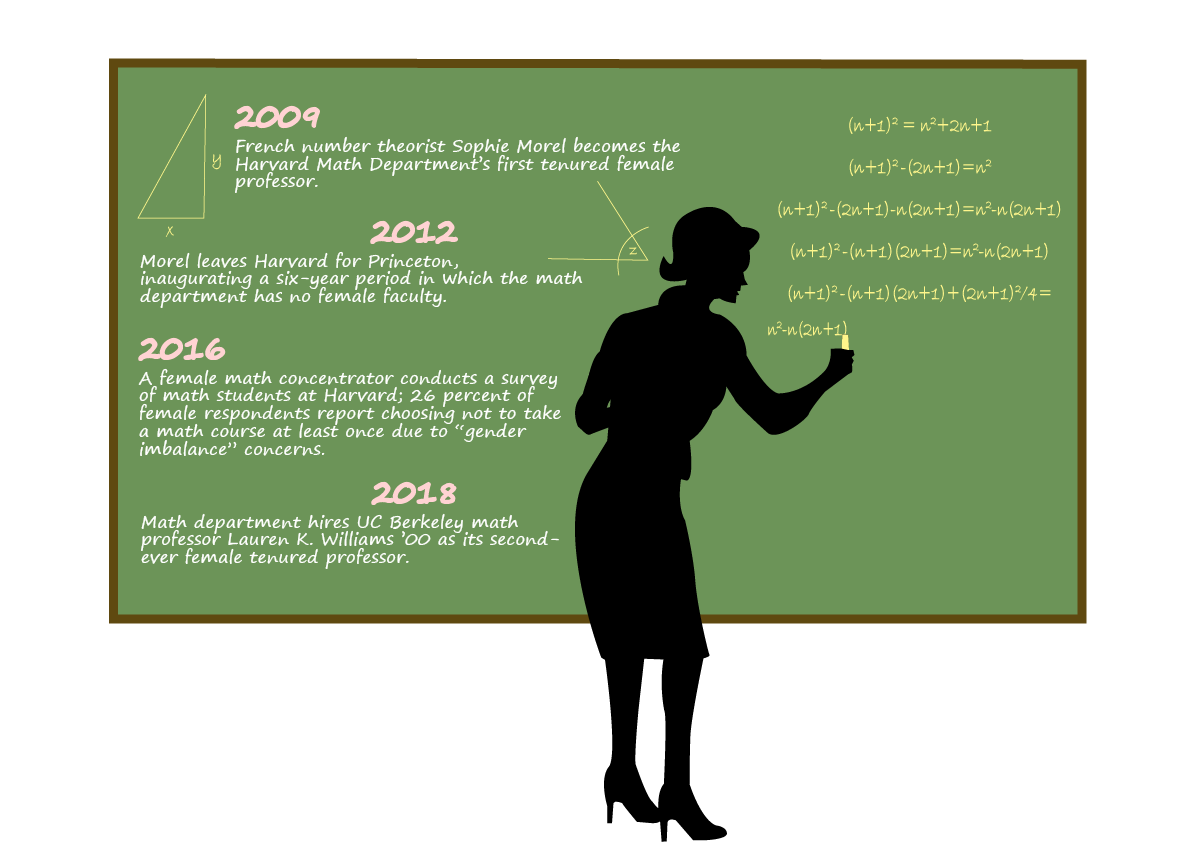 Harvard’s Math Department has hired a woman as a senior professor for the second time in its history, ending a six-year streak in which the department boasted not a single woman of that rank.

University of California at Berkeley math professors Lauren K. Williams ’00 and Denis Auroux will join Harvard’s math department as senior faculty at the start of the next academic year, Department Chair Curtis T. McMullen said in an interview last week.

Auroux has served as a math professor at UC Berkeley since 2009 and has published articles on subjects ranging from “symplectic submanifolds” to “Lefschetz pencils.” Williams, a former math concentrator, won a tenured associate professorship at UC Berkeley in 2013—and a full tenured professor position there in 2016—and has written extensively about cluster algebras and tropical geometry.

“It’s a really fantastic place to be, so I’m really looking forward to it,” Auroux said in an interview Thursday.

Williams fondly recalled her experiences at Harvard, both as a student and as an assistant professor.

“I spent four amazing years as an undergraduate at Harvard 1996-2000 (I was in Pennypacker and Pforzheimer) and another three years at Harvard as a Benjamin Pierce Assistant professor following my PhD,” she wrote in an email. “The students and faculty at Harvard are exceptional, and I am really looking forward to rejoining the vibrant intellectual life there.”

As senior math professors at Harvard, Williams and Auroux automatically earn tenure and will be expected to conduct research. The math department’s last female senior professor was Sophie Morel, who joined the University in 2009 but left for Princeton three years later.

Math professor Peter B. Kronheimer, who served as department chair before McMullen, wrote in an emailed statement Thursday that he is “thrilled” about the department’s “successful” recruitment efforts.

“Lauren and Denis are researchers at the very top of their respective fields, and will open up new areas for our department,” Kronheimer wrote. “Their presence at Harvard will be a real boost for the mathematical sciences.”

McMullen wrote in an emailed statement that Kronheimer—who stepped down from the chairship in July 2017—played a key role in convincing Williams and Auroux to come to Harvard. Across the past few years, math department administrators have taken several steps to improve their recruitment of female candidates at the faculty and graduate student levels.

The department has offered tenured professorships to at least three women in roughly the past decade and, in the 2016-2017 academic year, debuted two new programs explicitly designed to recruit women.

These efforts follow a long history of gender imbalance in the department. Current and former undergraduate and graduate students affiliated with the math department—including both women and men—have said the department’s lack of women in senior faculty positions made them feel uncomfortable and negatively affected their experiences and performance in the classroom.

In the wake of the hiring of Williams and Auroux, though, some department faculty and students said they feel more optimistic for the future of Harvard math.

Math professor Robin Gottlieb—who is not tenured and thus does not count as a senior professor—wrote in an emailed statement that she knew Williams as an undergraduate. Gottlieb wrote she remembers working with Williams to organize a Women in Math brunch for female students in the department.

“I am truly delighted that Lauren Williams will be joining the mathematics department,” Gottlieb wrote. “She’s a spectacular research mathematician, a wonderful teacher, an excellent speaker, and a great community member.”

Amanda K. Glazer ’18 and Meena K. Boppana ’16, two of the founders of the student organization Gender Inclusivity in Mathematics, said they believe Williams’s hiring marks a significant breakthrough for the math department.

“I’m obviously thrilled about it,” Glazer said. “It’s really great because I feel like it’s been a long time coming, and I know the department and the administration have been working super hard to try and get a female faculty member.”

Glazer recently sent a survey to math students at Harvard, Yale, Princeton, Brown, and MIT to gauge student opinion on, in part, issues of gender parity. The survey results revealed that 26 percent of Harvard female math concentrators who chose to respond reported deciding not to take a math course due to concerns over “gender imbalance” at least once during their time at the College. More than 80 percent of women math concentrators answered the survey.

Glazer said she is glad the math department hired a senior female professor before she graduates and leaves the College come May.

“I’ve just been really happy to see, over my past few years, some change,” Glazer said. “I really hope that this is an indicator of even more change, that hopefully they’ll be able to acquire even more female faculty members and that that will have, I’m sure, positive effects on the percentage of concentrators that are women.”

“It’s really awesome to see it finally come to fruition,” she added.

Boppana said she thinks Williams’s appointment will have both short-term and long-term impacts on Harvard math.

“I think that just the presence of having a female role model in a high place is going to have very strong effects on the entire culture of the math department,” she said.

“I think it’s great news, and I’m really excited to see what research she brings to Harvard and what she ends up doing here,” she said.

Williams’s hiring brings the University in line with peers like MIT, Yale, Princeton, and Brown; until now, Harvard was the only institution among this group whose math department lacked a single female tenured faculty member.