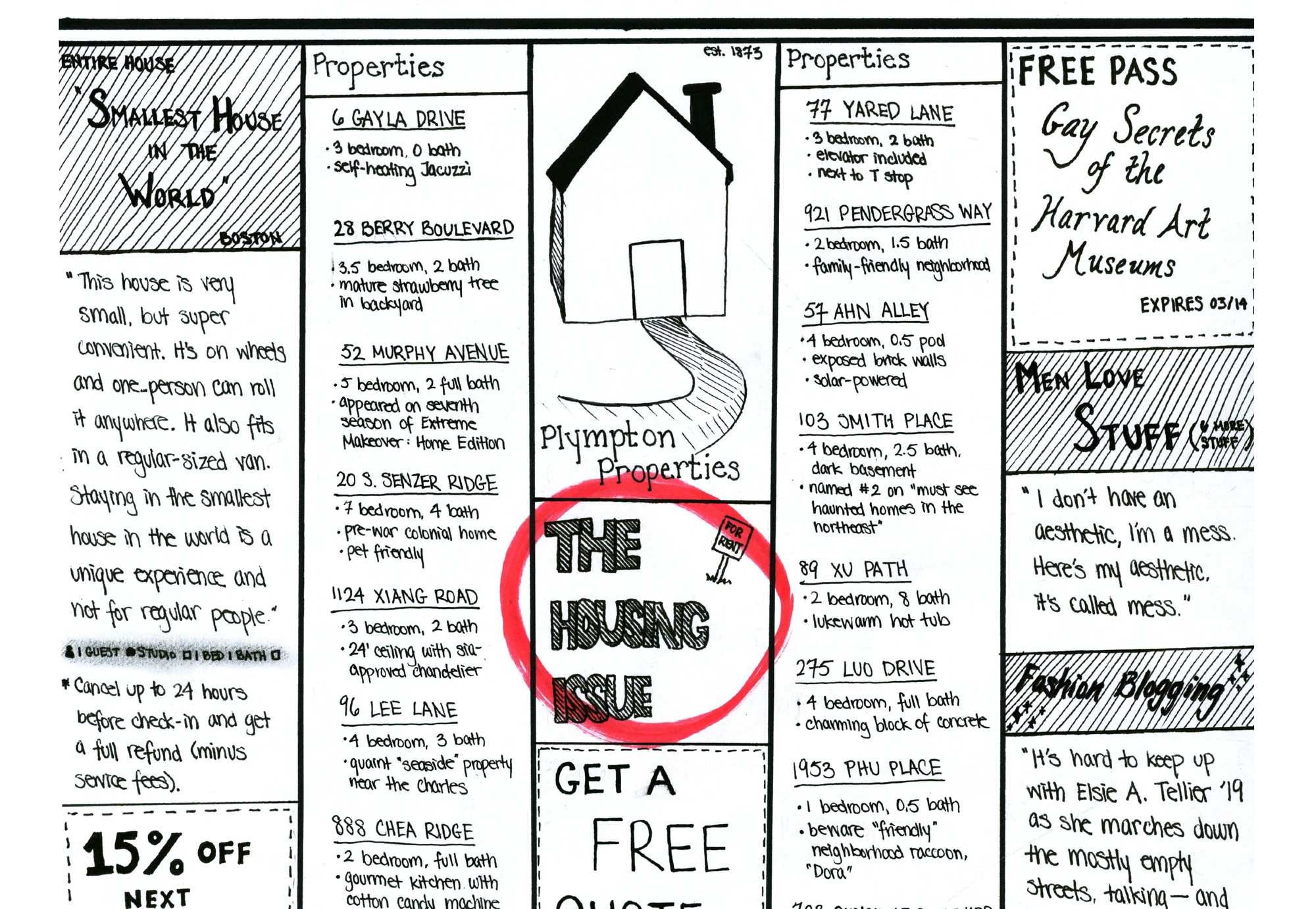 *Is “explainer journalism” obnoxious? Basically, we got a bunch of people who know way more about this topic than we do to explain it to us, so we can tell you about it.

If there’s one thing the two retired auditors at the back of your English class, Google, and the Mayor of Cambridge will definitely agree on, it’s that housing is just too expensive in Cambridge.

In an interview with Fifteen Minutes, Mayor Marc C. McGovern lamented the state of housing in Cambridge.

“We have people everyday who come into this office begging for housing,” McGovern says. “And I have to look at them and say ‘In two years, that project will be done and maybe you’ll get a place.’ I’m sick of saying that to people.”

It’s not a particularly new problem — rent has been increasing relentlessly in the area since the mid-90s — nor is it unique to Cambridge. Pick up a dart and throw it at any major metropolitan area on the Eastern seaboard and you’ll likely encounter a region struggling to manage its housing costs. For a city like Cambridge, walled on either side by some of the largest and richest research universities in the country, the problem seems especially salient and complex.

What is “affordable” housing anyway?

Depends on who you ask.

The City of Cambridge designates “affordable housing” for tenants or homeowners that shell out less than 30 percent of their income for housing costs. The designation almost overwhelmingly affects low-to-moderate income families.

However you slice it, “affordable” means a different thing depending on who you ask. It goes without saying that what’s affordable for a tenured faculty member is not the same as what’s affordable for a unionized clerical worker, or even a graduate student for that matter. The term gets even more complicated when you consider the bearing that other factors like family size, personal health, and commuting costs have on the affordability of a location.

Why has housing gotten more expensive?

As anyone who has taken Ec 10 knows, it all ties back to the market. The simple answer? Demand is high, but supply is low.

Cambridge is an increasingly attractive locale for a population trending downwards in age. A burgeoning biotechnology scene and the presence of several universities attracts 20-somethings fresh from college who are either seeking to deploy their new degrees at an edgy start-up or continue their education. Unlike their parents, millennials are staying in cities longer—traveling, working, and being single—instead of buying homes.

Harvard is also a major part of the allure. It’s a big employer that attracts a wide array of people: unionized workers, graduate students, lecturers, and tenured professors.

But the requisite supply of housing just isn’t there. Due to a combination of zoning laws and lack of available land, the amount of non-Harvard housing being built simply isn’t matching the interest levels. “On the regulatory side, a lot of zoning is necessary and too much. Those costs limit where you can build, and how much you can build,” says Jennifer H. Molinsky, a Senior Research Associate at Harvard’s Joint Center for Housing Studies.

What is rent control? And where did it go?

Would you believe us if we told you it is as self-explanatory as it seems? Essentially, when the government places restrictions on the amount a landlord can charge tenants for rent, that policy is called rent control.

Rent control was the standard in three Massachusetts cities—Brookline, Boston, and Cambridge—up until the mid-90s. In 1994, residents across the state narrowly voted in favor of a referendum that eliminated the policy state-wide. Consequently, a 1970 mandate in Cambridge—which placed limits on rent in buildings constructed before 1969—was abolished.

The 1994 referendum gave landowners much reason to rejoice. Under rent control, property owners were forced to lease houses at a rate 25-40 percent less than they otherwise could have, according to the National Bureau of Economic Research. The value of their property had depreciated severely in the years between the 1970 mandate and its abandonment in 1994.

The repeal of rent control policies across the state reversed this trend dramatically—housing valuations spiked by 1.8 billion between 1994 and 2004—but gave way to a new host of challenges. How could residents who relied on these rent-controlled properties keep up with exploding prices?

After rent control was abolished, rents in Cambridge jumped by more than 50 percent between 1994 and 1997. Twenty-four years later, rents are still on the rise.

How can you lower the price of housing?

There are two primary ways to lower the cost of housing: (1) lower the market rate price and (2) create more designated affordable housing units. It sounds simple, but politicians and economists don’t exactly agree on how to reach these ends. Easier said than done, right?

So how can Cambridge lower the market-rate price of its housing?

“The standard economic answer would be that if you want to bring down the cost of housing, you have to expand supply,” Chris Herbert, the managing director of Harvard’s Joint Center for Housing Studies, says. “The question is whether or not you can achieve development at a scale in Cambridge that will actually result in us seeing market rates come down.”

Cambridge’s two major housing advocacy groups, A Better Cambridge and Cambridge Residents Alliance, would likely disagree on the validity of Herbert’s answer. In fact, the biggest distinction between the two groups is their stance on the market’s role in addressing housing demand in Cambridge. ABC strongly supports private development to increase housing supply and lower prices, whereas CRA is generally satisfied with rates of market-rate development. More on that later.

Cambridge has two primary nonprofit organizations completely dedicated to lobbying for, building, and maintaining affordable housing complexes throughout the city: Just-A-Start and Cambridge Housing Authority. JAS owns 594 units of affordable housing and CHA has built 399 units, with 40 more on the way. Both are continuing to acquire new properties.

When the affordable developers bid for a property, they have to put together a projection for the city of Cambridge that balances their funding and the revenues from rent with the cost of building and operating the development. Even with all the financial support, the price of land is so high that affordable housing developers often lose money and take on debt. Many of their proposals aren’t approved.

Private developers are also required by Cambridge to ensure that 20 percent of the housing they build is “affordable” by the city’s definition.

How are people tackling the problem?

In Cambridge, ABC and CRA each advocate for a different solution.

ABC advocates for the production of more housing—period. It was founded several years ago by Cambridge native Jesse Kanson-Benanav, a project manager for an affordable development organization in Somerville. ABC wants to see more housing developments, both 100 percent affordable and mixed-income complexes. As Kanson-Benanav says, ABC is a strong advocate for affordable housing development, but “we also do believe that private developers that do majority market-rate housing have a role to play in meeting demand for market rate housing and giving back to the community through affordable housing.” In short, ABC believes that increasing the amounts of both market-rate and affordable housing will lower the costs of housing overall.

In contrast, members of CRA, founded by Cantabrigian Lee Farris, believe that the primary solution should be creating more affordable housing complexes. “We don’t think you need to do anything to encourage market-rate housing because I don’t think Cambridge has a lack of housing being built,” Farris explains. “It’s a question of whether you think the market just needs minor adjustments, or whether you think the market is broken and needs to be fixed.” While CRA advocates have historically supported certain instances of private development, they generally believe that increasing market-rate housing won’t sufficiently stymie demand. What’s really needed, they argue, are zoning policies that benefit affordable housing developers, giving them a leg up over private developers in buying land.

Each election season, the two advocacy groups each endorse a different slate of candidates. Housing is typically a hot-button issue in the race, and the City Council electees are typically split between both organizations. This year, CRA’s candidates earned four seats and ABC’s earned three seats.

Though each organization has drastically different principles, both founders agree they share the same overall vision for the city. “We are working for a livable, affordable, diverse Cambridge,” Farris says. “The ultimate goal for both organizations is to build a Cambridge that is inclusionary of everyone and is affordable for everyone,” Kanson-Benanav says.

The Cambridge City Council’s biggest move towards a solution came in November when they voted to increase the number of “inclusionary” housing units mandated in Cambridge. Zoning ordinances have, since the late 90s, required that properties with ten or more units allocate a portion of those units for “low- and moderate-income tenants or moderate and middle-class tenants.” The November vote boosted that requirement up to 20 percent. Both ABC and CRA endorsed the change.

The City Council has also been involved in lobbying for universities, primarily MIT, for more graduate student housing. MIT filed a rezoning petition to redevelop a large piece of land in Kendall Square where the Volpe Transportation Systems Center currently operates. The Council approved MIT’s proposal, but they also supported a MIT graduate student petition calling for the University to turn some of that land into graduate student housing. Ultimately, MIT agreed to a net increase of 250 graduate student beds. According to Jan Devereux, Cambridge vice mayor, the Council lacks the grounding to encourage Harvard to undertake a similar endeavor since Harvard is expanding in Allston, on the other side of the Charles River.

What does any of this have to do with Harvard?

Everything. Think about it this way: Harvard is a big draw for the city of Cambridge. New residents are drawn en masse by its scholarship, research, and employment opportunities. Recent data from the 2017 Town Gown report, an annual snapshot of Harvard’s “presence” in the city, shows that some 25,000 Harvard affiliates—including faculty, staff, graduate, and undergraduate students—are spread out across the city in a mix of University-affiliated and non-University-affiliated housing.

For many of the 12,000 Harvard staff members who live in Cambridge, the affordable housing crisis is a real issue with daily implications. Their ability to reside in proximity to the University impacts how and when they work, so Harvard has a real stake in the process.

That said, many experts and Cantabrigians say that Harvard, at least indirectly, has been contributing to the problem. One reason, says Chris Herbert, the managing director of the Joint Center for Housing studies, is that the Harvard graduate student population is increasing but the amount of graduate student housing isn’t. “That adds to demand in the housing market,” he explains. “Graduate students can live together with other graduate students, pool together their resources, and have more effective demand than families can—driving prices up.”

Herbert suggested that, as a result, universities have an “obligation to provide housing opportunities for grad students.” That’s something that both Farris from CRA and Kanson-Benanav from ABC have agreed on.

In an emailed statement, Ann P. Hall, the Director of Communications for GSAS, wrote that “the GSAS Office of Residential Life manages four residence halls, which provide affordable, on-campus housing for graduate students.”

Just under half of the University’s buildings are used for housing. Harvard houses 98 percent of its undergraduates, and has the capacity to house 48 percent of its graduate students, which to some degree reduces the amount of non-Cantabrigians flooding the market.