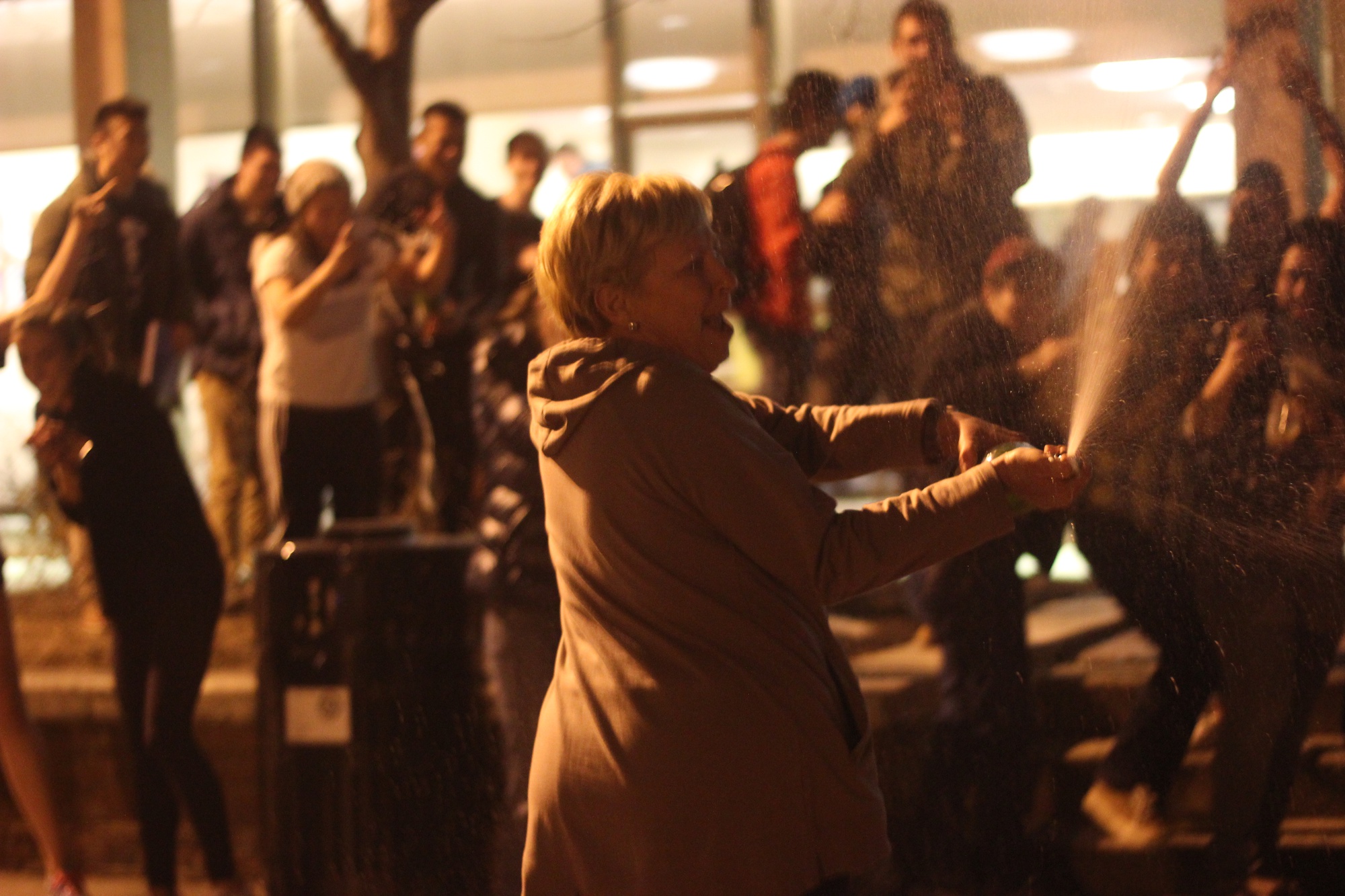 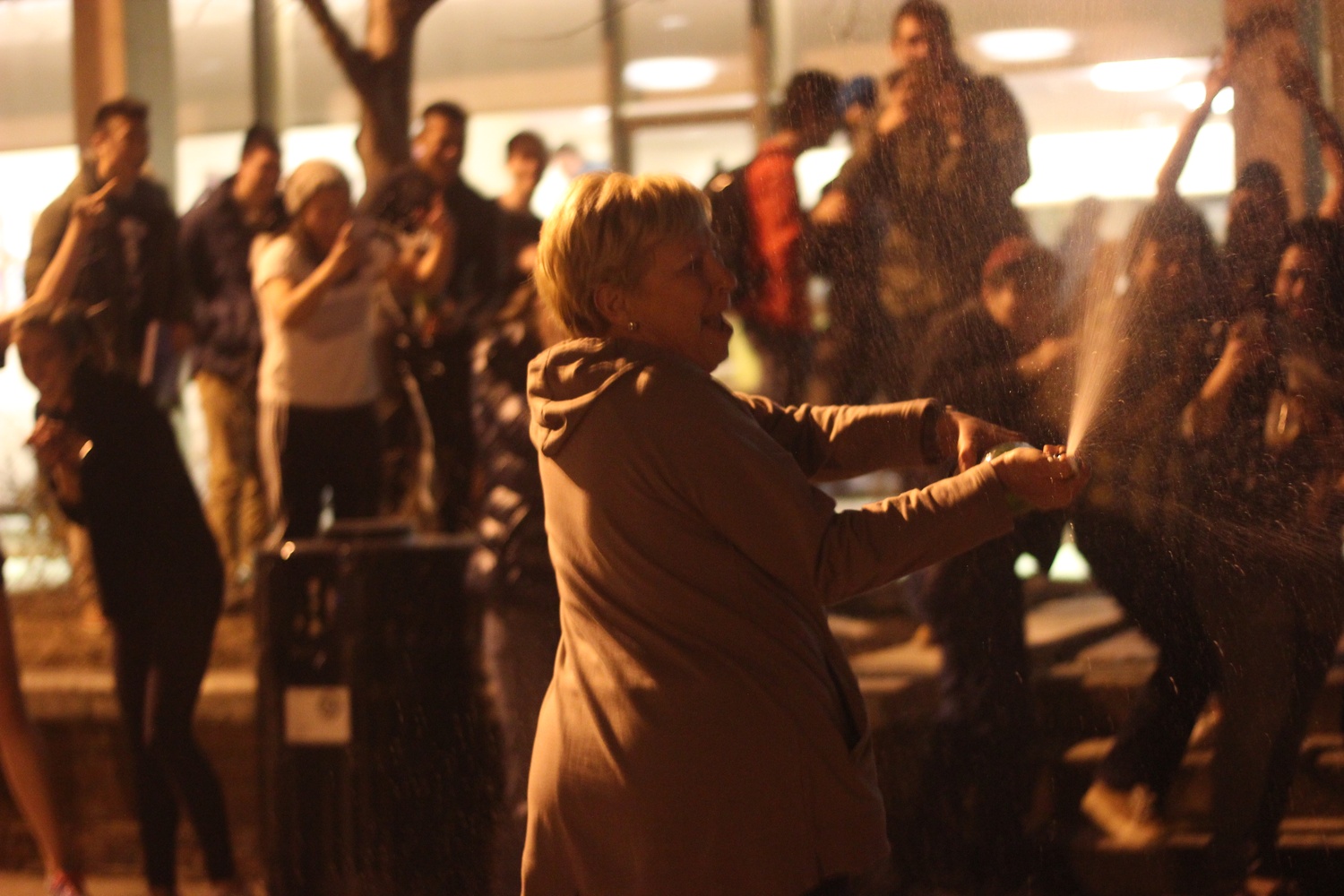 May we all have as good a time as Quincy Faculty Dean Deborah J. Gehrke did last year by the end of this ordeal. By Lauren A. Sierra

Regardless of if you’re a Patriots fan weathering the storm of hatred coming from every non-New Englander in your house or if you’re a hopeful Eagles fan praying that Nick Foles has another seven-touchdown game, this afternoon’s Super Bowl is likely to give your liver CTE. It’s the perfect occasion to showcase how much or how little you know about football, much to the annoyance of the people watching the game with you, regardless of which category you fall into.

If you’re trying to numb the pain of the work you’re foregoing to watch a game you may not even care about, we’ve got a drinking game ready to fuel your eventual victory parade or angry march once the final whistle blows.

Take a shot if you’re a Patriots fan. Take two if you’re an Eagles fan, or rooting for them just to spite your brazen New England peers. Thinking this seems like a striking example of inequality? We would argue that Patriots fans have already been annoying enough regarding Brady’s eighth visit to the Super Bowl, so the liquid kickstart ought to go to the milder side of the fans. Eagles fans need all the help they can get, especially considering that they have to watch the game within the Mecca of athletic arrogance.

If you're trying to actually watch the game and drink accordingly, take a shot every time a field goal is kicked, the defense forces a turnover, or a forty-plus yard pass or run is completed. Take two shots for every touchdown or defensive touchdown return. This may seem like a lot, and it is. Non-Patriots fans need this. As a Dolphins fan living with three Patriots fans, I need this. Do it for the culture. Do it for your sanity.

If you don’t really care about the game and just want to keep your mind occupied while watching, it may be in your best interest to keep an eye out for some non-football related Super Bowl happenings to get you through the three hours.

Take a shot if three or more Brady jerseys are present in the room, if a Gronk Tide Pod awareness ad runs, if someone shushes the viewing party to hear a commercial, or if Chris Collinsworth makes a stupidly unnecessary observation (for example, “I’m sure Ertz hoped he would have caught that pass.”) Take two shots if the Brady-Belichick-Kraft conflict is brought up, if Mountain Dew runs a trippy halftime ad, or if you see someone hide a beer because a proctor walked by.

Down everything you have if the Patriots win. Yeah, I’m salty. No shame.

Though I've never experienced this, watching the Super Bowl can be fun (and totally not a reminder of how winning the AFC is a lost cause as long as Brady is playing). We hope that this guideline can guide you to a wonderful evening. If the Patriots lose tonight, fear not. They’ll probably be back next year. If the Eagles lose tonight, fear everything. Shutter your windows and bar your doors. The wave of New England football fan arrogance is lethal.