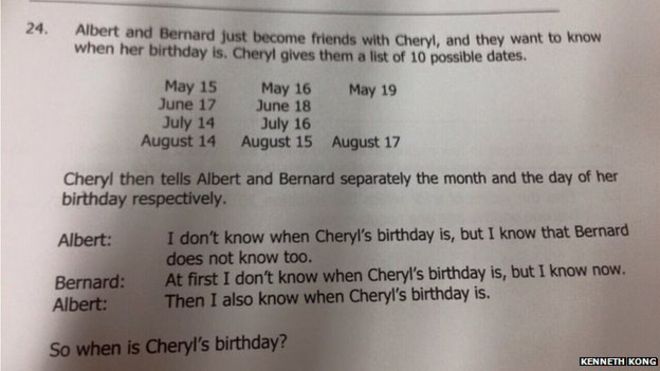 For those of you who have started camping out in Lamont to prep for finals, you may not know about a new problem that has gone viral. For those who want to know more about the new thing after White Dress, Blue Dress, we have some answers for you.

Who is Cheryl, and what’s her problem?

Cheryl is a girl who got sick of the ol’ “Harvard Intro” in a controversial logic problem originating from Singapore. The logic problem (shown above) is referred to as “Cheryl’s Birthday”, and it is a struggle to figure it out. But it is a bigger struggle to think about what is wrong with Cheryl.  Why is she so secretive about her birthday?

Why do we care?

Because as Harvard students, we are very intelligent and love to solve hard problems. Also at first, people thought this brainteaser was intended for middle school students.

People were worried that Singapore was forcing middle school kids to do impossible math problems. The creators of the puzzle, the Singapore and Asian Schools Math Olympiads (SAMSO), later clarified that the problem was actually part of a test given to sophomore and juniors in high school.

So if you haven’t figured out the answer yet, don’t feel too bad; just think about it as an extra SLS 20 problem.

So, what is the answer?

In response to global interest and many arguments, SAMSO has released an official solution to the problem. According to them, July 16 is the right answer. Well, great. I guess we can pack up our bags and move on, right?

Not so fast. Like the controversy with #thedress, there seems to be a lot of people who argue that SAMSO is actually wrong.

The “alternative answer” is August 17th. Their argument? “How the heck does Albert know that Bernard doesn’t know Cheryl’s birthday?” For those of you who want the detailed explanation, The Guardian has one here.

In the end, the difference comes down to a small technicality: did Albert know (alternative answer) or did he deduce (original answer) that Bernard doesn’t know Cheryl’s birthday?

This thought process has led to many people arguing that the answer is in fact August 17th. However, on their facebook page, SAMSO has already declared that this “alternative answer” as being wrong.

Wait, if SASMO says they’re wrong, isn’t that it?

That depends. As the New York Times has pointed out, this logic puzzle is quite convoluted. Given the way SASMO has written the question, either answer could arguably be right. It’s like that one problem on a final that was written badly by your professor or your TF. Either way, you hope you can still get those extra points.