The Grind Never Stops: Two Centuries of Slang at Harvard 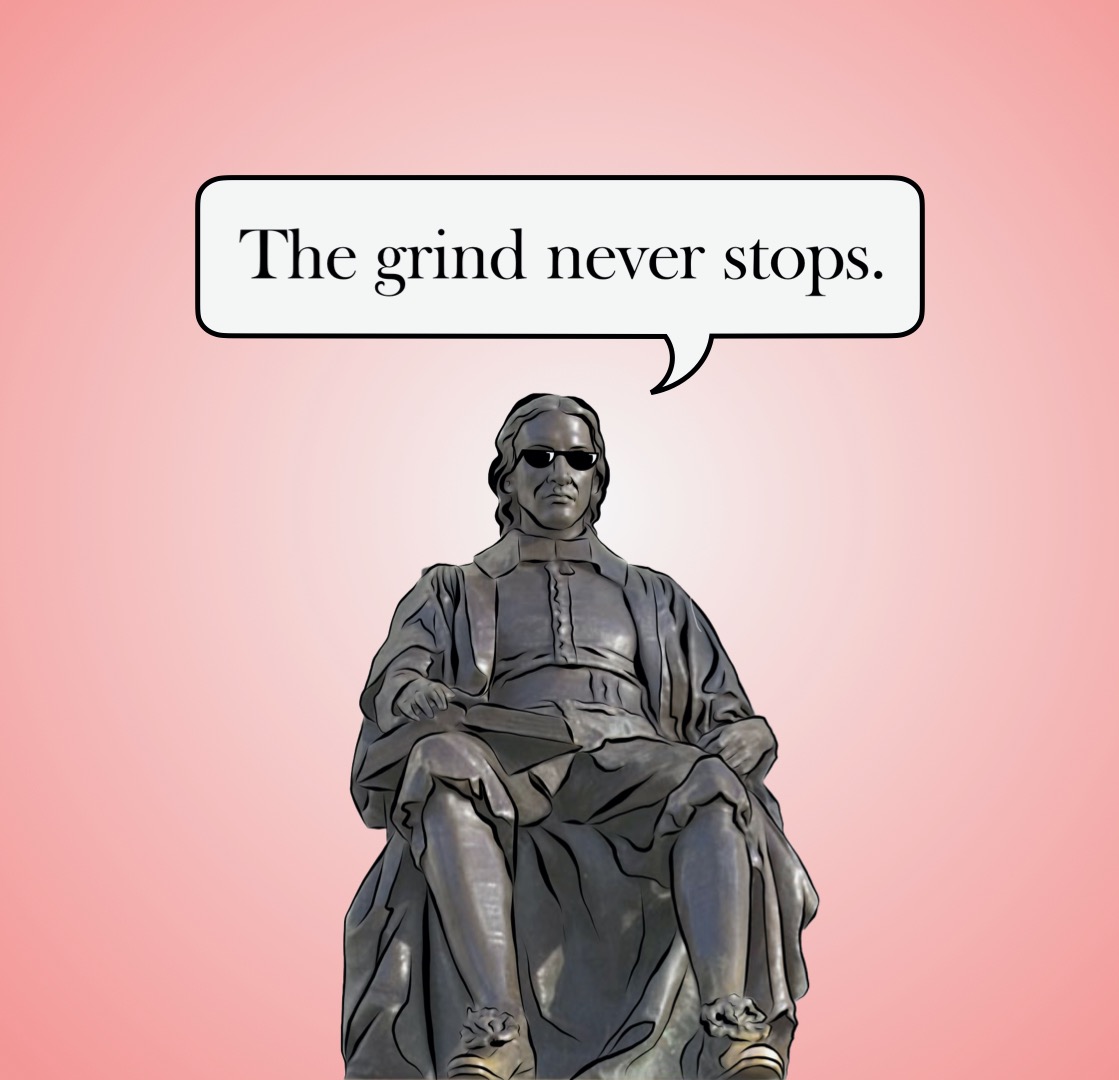 Every once in a while, as I pass the enormous columns of Widener Library, I’m struck by the historical permanence of Harvard. Widener grants imposing physicality to the abstract idea that Harvard has been around for a long, long time.

And yet, it’s not terribly unusual for buildings to last a long time. Although the pandemic has kept most of us far from campus, we are still surrounded online by an even more impressive reminder of Harvard’s antiquity. Every day, as we Zoom with our proctors and work on our comps and text about punches, we participate in the great, multi-centennial linguistic tradition of Harvard slang.

“Comp” has been around so long (predating even the Crimson’s first issue) that no one knows whether it stands for competition or competency or something else entirely. The origin of “punching” is similarly shrouded.

The etymologies we do know often reveal interesting relationships between Harvard and other colleges. We can be proud, for example, of pioneering American use of “frosh” for freshmen. This is actually more Harvardian than you might think — it’s not a simple shortening of freshman but actually a pilfered Germanism. Young Germans would call the youngest university students Frosch, or “frogs.” In contrast, less cosmopolitan universities simply shortened “freshmen” to “freshies,” and we can all take some pride and relief from the fact that “frosh” has won out.

“Concentrations,” in contrast, represent a battle we seem to have lost, at least in the wider world. In 1900, all a Harvard student had to do to graduate was pass any 16 classes on offer. Former University President Abbott Lawrence Lowell thought this inspired students to treat academics like “an inconvenient ritual,” occasionally rehearsed in between bouts of socializing. So, in response, he introduced the requirement of adopting a “department of major concentration.”

Now, a century later, awkward freshmen still lead with, “So what are you concentrating in?” And given the long list of once universal slang that has fallen quickly out of fashion—groovy, bogart, skinny, home fry,—the longevity of Harvard slang is just as arresting as its originality. The grind has not, in fact, stopped since the 1850s when the word was first used. We’ve already alluded to the long, shrouded histories of comp and punch.

As early as 1886, Harvard students were writing about “Harvard Slang.” One long-gone Crimson columnist described the transition from freshman affectation to unconscious upperclassman habit, and this goes some way toward explaining our slang’s longevity. Even if freshman think, as I did, that maintaining the distinction of a “concentration” is silly and mildly pretentious, it’s not worth wasting whatever minor social capital we have dying on that particular hill. By the time we are upperclassmen, unconscious habit forestalls any change. Furthermore, slang that is particular to elements of college life (or even specifically Harvard life) serves a more practical purpose than words like “groovy” or “funky” or “cool,” which all generally refer to the same idea.

In both these ways, institutional slang lasts far longer than most other slang. But the longevity of Harvard slang reveals something about how our institution works more broadly. We may take some pride that Harvard is sufficiently preeminent to maintain its idiosyncratic terminology (“concentration,” “punch” etc.) without regard for external pressures. We may feel some embarrassment at the pretension of doing so. But in remembering Harvard’s perhaps extraordinary resistance to external pressure, it’s important not to conflate that with our very ordinary relationship with internal pressure. There’s no reason to think that Harvard students are any more resistant to institutional conformity than any other group of college students.

In that context of slang, conformity is relatively harmless, but it can be much more damaging when it comes to Harvard’s more substantive traditions. To some degree, every institution needs the freshman-affectation-to-upperclassman-habituation pipeline, and it might seem odd to lament complacency in a student body that is constantly criticizing its University: on divestment, political complacency, mental health support, exclusivity, or final clubs.

But while the University has made progress on some of these fronts, on others that criticism has not manifested change. The reason is that most Harvard students are not activists — we pass from affectation through habituation to graduation. That’s not necessarily a problem: we can’t constantly question everything, liberal arts cliches be damned. We need some level of assimilation.

Aurash Z. Vatan ’23 is a resident of Mather House. His column appears on alternate Tuesdays.