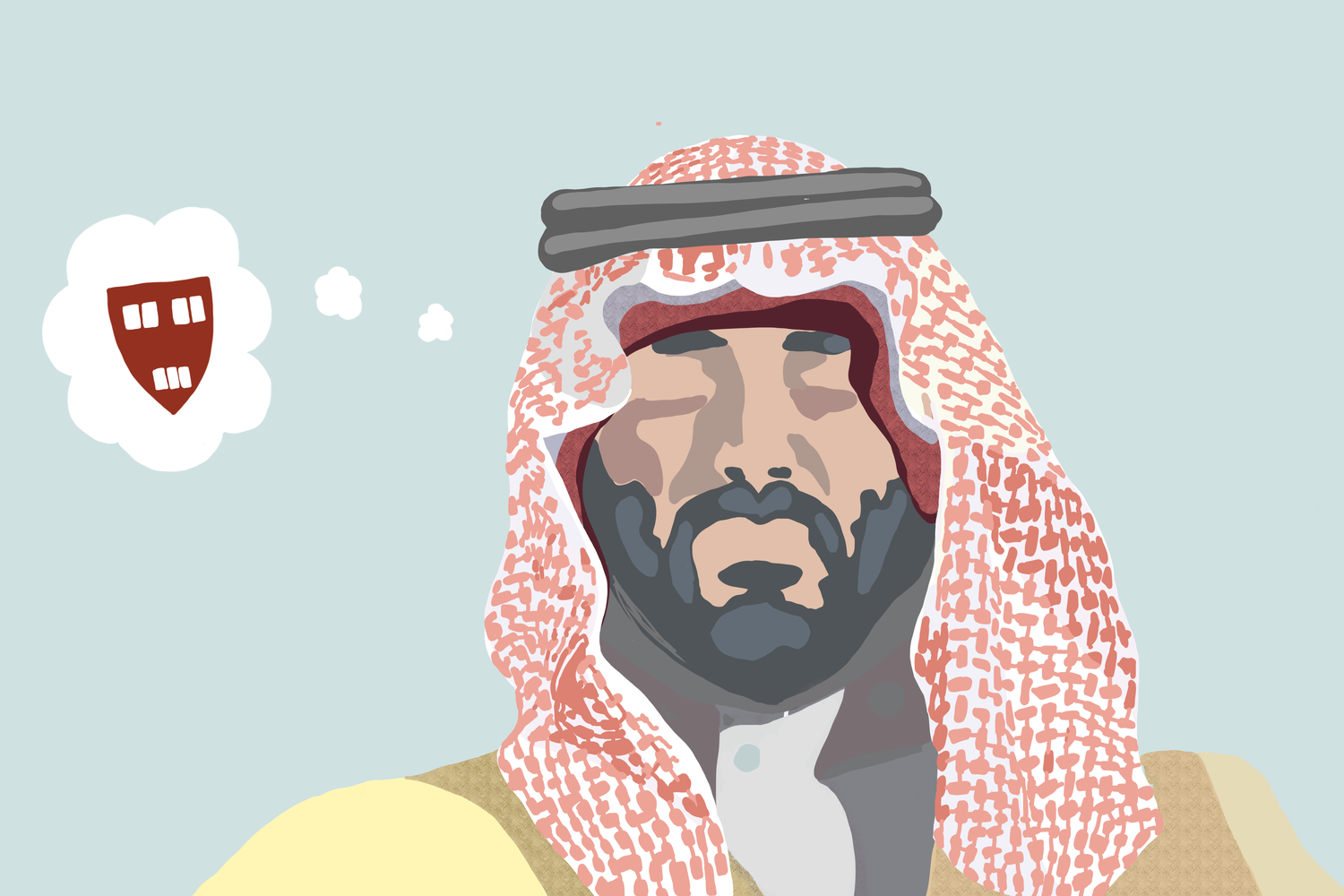 Dr. Ambreen Zaman Riaz was impressed by the restaurant. “It was a sushi place,” she says, “and it was really good by the way, really good sushi.” But it was the company, not the food, that surprised her. The restaurant wasn’t segregated by sex or gender — a true rarity in Saudi Arabia. The Kingdom was modernizing before her own eyes.

Over a sometimes glitchy Zoom call, Zaman Riaz, then a Harvard graduate student, recounted the details of her April 2018 visit to the Saudi Kingdom. The trip, organized by the Harvard Kennedy School Belfer Center’s Project on Saudi and Gulf Cooperation Council Security in collaboration with Gateway KSA, sent eleven Harvard students on a nine-day-long academic and cultural exchange mission. It was only one of Harvard’s many ties to the Saudi Kingdom in the months leading up to journalist Jamal Khashoggi’s assassination — ties that included, among others, a multimillion-dollar history of gifts, an official campus visit by Prince Mohammed bin Salman that same March, and even direct collaboration with Saudi policymakers through the Kennedy School’s Evidence for Policy Design project.

Yet the trip, like most of our institutional ties to Riyadh, proved complicated at best.

For one, there was the self-policing. Zaman Riaz’s research, which she presented at a meeting with students from Effat University, a university for women in Jeddah, focused on female empowerment. Her workshop-based research featured the kind of insights and ingrained value judgments that run brazenly counter to official Saudi policy — which is exactly why Zaman Riaz felt the need to carefully tone them down, to ensure that they didn’t prove “too controversial” or “aggressive.” She thinks she was hardly the only Harvard expat biting her tongue — doing so was the norm within the delegation. “We definitely felt that we had to hold quite a few things back,” she says.

At the same time, Zaman Riaz was frustrated by what she deemed the forced “touristy,” overly positive nature of the trip, which included visits to archeological sites and several major cities, as well as a reception with the trip’s host, Prince Turki al-Faisal. And while relatively (and sadly) radical improvements like the sushi bar struck her, Zaman Riaz felt like she got a purposefully warped glimpse of her host country. The social advancements she witnessed (or, rather, the social advancements that were carefully placed within her sight) seemed more like “window dressing,” or “sort of a façade.” A set of carefully cherry-picked indicators of change.

When asked whether she felt like she’d met the real Saudi Arabia, her answer was an unequivocal no.

Zaman Riaz’s account isn’t exactly surprising — self-censorship and rose-tinted tours are almost a given when visiting authoritarian countries. It’s even less surprising given the trip's co-host, Gateway KSA, an organization financially backed by state-controlled Saudi corporations, has recently drawn scrutiny for gifting influencers all-expenses-paid trips to Saudi Arabia in exchange for glowing coverage. The group isn’t exactly subtle about its image-laundering efforts either — its website names “influencers, policymakers, and leaders of tomorrow” who can “see beyond today’s headlines and tweets” as its target audience.

So Harvard put together a glamorous trip to Saudi Arabia, one that was characterized by soft propagandistic efforts and the reflexive self-imposed boundaries on the participants' speech. That much is as obvious as it is predictable; a logical continuation of our University’s outreach to a number of less than democratic countries. The more relevant question is whether such ventures are ever a net good.

Rolf Mowatt-Larssen, a former CIA intelligence officer and the senior fellow at the Belfer Centre who led the trip, thinks they are. He is also, refreshingly enough, one of the few people willing to defend academic endeavors like the 2018 trip, while still candidly acknowledging the ways in which they may benefit an existing regime.

Mowatt-Larssen’s perspective on the trip is at times more optimistic than Zaman Riaz’s — he recounts, for example, how while grabbing a beer at the airport, the attendees shared their appreciation for the lack of an overt propagandistic “trap” within the visit. Mowatt-Larssen was actually surprised by the extensive leeway he and the other Harvard affiliates were granted in terms of speech. But he’s still realistic about their hosts’ motivation. “The Saudi government was trying to encourage all this because it wants to increase interaction between Saudi citizens and institutions and academia. So we were, Harvard was, very much a test case. Again, I was very comfortable — Harvard was very comfortable with it,” he says in an interview.

More crucially, he thinks that allowing Saudi Arabia to present itself to the world in an idealized fashion meant that the regime actually had to prepare something to show; to engage in some reform, even if just for purely performative reasons. Mowatt-Larssen uses a briefing the group received from “a group of Saudi female officers” on anti-terrorism as an example. “Obviously, it was a show in a sense, but it was real, too,” Mowatt-Larssen says. The government's outward-facing mimicry had positive effects on some of its actual people; the quest to unrealistically portray their own society forced officials to accept some change.

But when the curtain falls, the show remains nothing but a show.

The very same prince that once hosted the Harvard delegation, the one who offered our students a grand, relatively uncensored dinner, finds himself in the headlines, months later, for casting doubt on the CIA’s account of Khashoggi’s murder. The sushi restaurant and female officers become but positive outliers against a mortally misogynistic backdrop. Reality returns, unchanged.

Mowatt-Larssen knows that much — perhaps on a deeper, personal level, having personally known Jamal Khashoggi. Harvard knows it too: Prince Turki was soon disinvited from one of his regular visits to our campus; and the Belfer Center’s Saudi Project, along with its delegation aspirations, ended months after the debacle. Harvard Kennedy School spokesperson James F. Smith declined to comment on the matter. The journalist's assassination shone a bright, harsh light on the realities of the Saudi Kingdom that marginal benefits of a trip like intercultural engagement simply couldn’t justify. A red line was crossed, and productive engagement was no longer a possibility.

But why was the line drawn there of all places? Why was a new development more powerful than years worth of fiercely misogynistic authoritarianism?

How do we decide when the ethical ticket price is too much for the show?